Home » Sport » Upcoming N.H.L. Season Will Have Flashes of Other Difficult Eras

Upcoming N.H.L. Season Will Have Flashes of Other Difficult Eras

The first time a pandemic halted a professional hockey season was in 1919, when an outbreak of the Spanish flu ended the Stanley Cup finals before a champion could be crowned. Just days after the cancellation, Montreal Canadiens defenseman Joe Hall, who had played in the finals, died in a Seattle hospital of pneumonia related to the flu. He was 37.

A century later, amid the dread of the coronavirus pandemic, the N.H.L. did what hockey authorities couldn’t do back then, recalibrating after a shutdown to finish the 2019-20 campaign in two Canadian bubbles, with the Tampa Bay Lightning winning the Stanley Cup in September.

Now, as the N.H.L. prepares for the mid-January start of a second season that will be impacted by the virus, crises and contingencies echo from deep in the league’s 103-year history.

If all goes according to plan, the N.H.L. will play a 56-game schedule — rather than the usual 82 — that will go through May, with playoffs to follow. The Stanley Cup is slated to be awarded no later than July 9. The league said it hoped to start the 2021-22 season as usual, in October.

With the league’s 31 teams realigned to eliminate cross-border travel during the regular season, the N.H.L. will, for the first time in its history, have every Canadian team, all seven of them, alone in one division.

There is something of a precedent for that: Starting in 1926, when the Rangers made their debut, and lasting through 1938, the N.H.L. split its teams into Canadian and American divisions. But to balance the numbers, the Canadian division accommodated the New York Americans and the St. Louis Eagles.

In the 1970s, the upstart World Hockey Association featured a truly all-Canadian division for two of its seven seasons, with as many as six teams. Not everybody was enthusiastic about it: Owners of the W.H.A.’s nine teams based in the United States during those two seasons feared that the arrangement might lead to secession and an exclusively Canadian league.

While that didn’t transpire, when the W.H.A. merged with the N.H.L. in 1979, three of the four teams the N.H.L. absorbed were based in Canada: the Quebec Nordiques, the Edmonton Oilers and the Winnipeg Jets.

Like everything else in the past 10 months, a new N.H.L. season will begin amid lurking doubts.

In that, it recalls the era when the upheaval of World War II whittled rosters and raised questions of whether the league should carry on at all.

In 1939, when Canada went to war, five of the seven N.H.L. teams were based in the U.S., but hockey still predominantly ran on Canadian fuel: That season, 90 percent of the players had been born north of the border.

The first wartime season carried on more or less as usual, with some notable modifications. The Toronto Maple Leafs, for example, incorporated a course on firing machine-guns into their preseason training regimen. The following spring, the Rangers collected the 1940 Stanley Cup.

From there, things got increasingly difficult. Before his death in 1943, N.H.L. President Frank Calder navigated the league through complications like limited manpower as players entered the armed forces, border restrictions and ongoing questions about the morality of playing sports in a world at war. 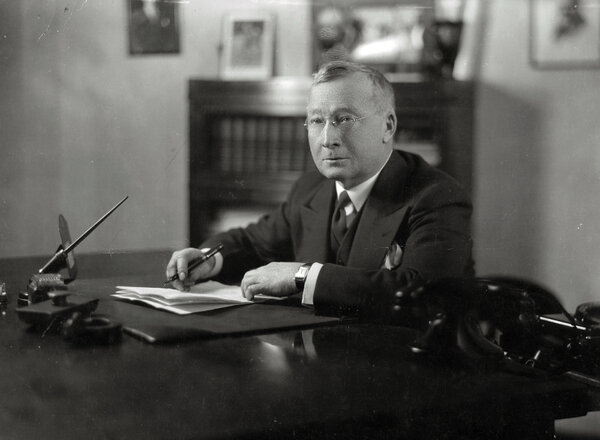 In 1940, after the Canadian government passed a new mobilization act, all able-bodied men aged 21 to 45 were required to complete 30 days of military training. N.H.L. players were permitted to do theirs before the season started, and the Montreal Canadiens joined a militia unit en masse, the local 17th Duke of York’s Royal Canadian Hussars.

In the summer of 1942, just months after the United States joined the fight, it seemed that the Canadian government would finally determine that pro hockey was more of a distraction than the war effort could afford.

Calder made the case for continuing. Prospects were bleak, he was led to understand. But Elliott M. Little, director of Canada’s Selective Service, acknowledged the value of maintaining the N.H.L. in some form. “Or else,” he told The Canadian Press, “we would face the problem of replacing what it at present means to hundreds of thousands of Canadians in entertainment and maintenance of morale.”

The season proceeded, with adjustments. Roster sizes were reduced from 15 to 14, and the league no longer required teams to dress a minimum of 12 players for every game. Overtime was abolished, too, in order to get traveling teams out of rinks on time, in deference to wartime restrictions on delaying or rescheduling trains.

“Every sport is experiencing war problems, and hockey has by far the toughest going of all,” Rangers General Manager Lester Patrick said early that season in an interview with The New York Daily News. He had his eye on the big picture at the time, but he was also sizing up his team’s straitened competitive circumstances.

There were, that fall, 74 N.H.L. players on active service with the U.S. and Canadian armed forces. The men recruited to replace them on the ice weren’t always top talents.

The Rangers, Patrick argued, had suffered more than most, having lost nine regulars from the previous season’s squad. “We’re about all out of players,” he said.

More and more players were called to the colors, or volunteered to serve, as the war went on. They included some of the league’s brightest stars, like the Leafs captain Syl Apps (Canadian Army), Boston goaltender Frank Brimsek (U.S. Coast Guard), and the Bruins’ entire first line of Milt Schmidt, Bobby Bauer and Woody Dumart (Royal Canadian Air Force).

For the season starting this month, the N.H.L. will reflect the times in much smaller ways.

Rosters will be altered, for instance — although this time, instead of contracting, league lineups will expand. Each team will carry a taxi squad of four to six players to facilitate replacing injured players without call-ups having to go into quarantine.

Many of the other shifts in operating procedures have become common during the coronavirus pandemic. Coaches will be required to wear masks while patrolling their benches. If need be, teams will temporarily relocate to neutral arenas in cities not their own.

As for fans, several U.S. teams, including the Arizona Coyotes, hope to accommodate reduced crowds in their arenas, but current health regulations won’t allow any spectators in Canada.