In her latest column, Tamsin Greenway analyses the Vitality Legends Series between England’s Vitality Roses and the Vitality Superleague All Stars. In particular, she takes a closer look at the ‘championship quarter’ and the reasons why it can be so effective for teams.

Let me start by saying just how amazing it was to have netball back on our screens and for me personally, it felt so great to be able to courtside for the three matches in Loughborough.

So much hard work had gone into making the Vitality Netball Legends Series happen and ensuring that it was played safely and in accordance with all of the guidelines and COVID-19 protocols.

The fact that we had netball back, was a real boost and hopefully brought some joy and relief to netball fans, during difficult times.

I said before the series started, that I didn’t mind about the score, I just wanted all of the matches to feel competitive, and they certainly were.

The All Stars took it to England right from game one and pushed Jess Thirlby’s side in lots of key areas. They asked questions of them and the Roses answered those questions. In short, it was an invaluable series with regard to their continued development.

England’s players really needed to be tested, they needed to find out where they might have potential weaknesses and they needed to be able to adapt and change. We definitely saw that from the Roses; they were able to take on information, come out each quarter and aim to do something different. 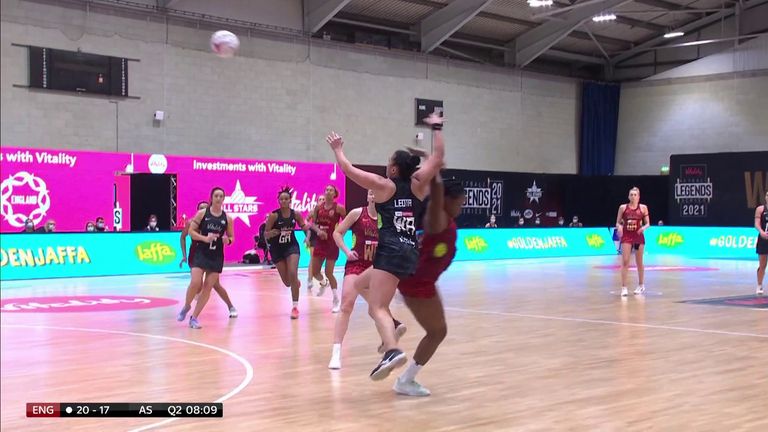 When it came to individual performances, there were some clear standouts starting with the All Stars’ captain Liana Leota. She just put on such an entertaining show; some of her flicks, tricks and deliveries were out of this world!

Ahead of game one, I said that she was the best player on the ball in the Vitality Netball Superleague, and she showed that. I don’t think that there’s going to be anybody who challenges for that title this season, even Madi Browne!

world-class
/ˈwəːldklɑːs/
adjective
(of a person, thing, or activity) of or among the best in the world.
"a world-class player"

Madi is a different kind of player, she is world-class and knows how to control the game. Her attacking movement is incredible and her delivery pinpoint, but in terms of what Liana can do with the ball, she leads the way. Her range of skills, her no-look passes, and vision are insane.

The only person who is close to doing the same thing in the northern hemisphere is Cat Tuivaiti, and of course, she’s going to be working with Leota at Severn Stars this season.

Cat’s presence within Stars’ coaching set-up is going to be really important to ensure that they make the most of Liana, because she’ll coach the players around her to always be ready and be in the positions to work off Liana’s flair and quick thinking. Over in New Zealand, Peta Toeava also displays the same effortless brilliance on the ball.

Proud of our wizard reminding the world who the 🐐 WA is, hurry back @TeamLeota 🌟 pic.twitter.com/6fYJycTUrE

For the Vitality Roses, there were several players that stood out the likes of Razia Quashie, Nat Haythornthwaite, Laura Malcolm and Eleanor Cardwell, but it was a full squad effort and all 14 players had time to get on the court and impress.

That’s a great thing but it also creates a real headache for Jess Thirlby as she’s still got players to return into the group; it’s going to be intriguing to see what happens when the numbers need to be whittled down.

For England Netball as a whole, it’s a really exciting time because I don’t think that they’ve ever been in a position where they’ve had this much depth and variety within the squad.

Now, I want to take a look at where the Roses won each of their three matches during this series and that’s with an impressive third-quarter performance.

Even when they had a good start to the game, the All Stars always came back at them and so it was the third quarter which made the difference and it showed, very clearly, why the third is so often known as the ‘championship quarter’ or the ‘match-winning quarter’.

There are lots of reasons behind it but the most obvious one is that a team is able to press that reset button at half-time. It’s that opportunity for the whole group to come in and have a good break, talking and taking on information.

The first half can often fly by and communication is one of the first things that can go when a team is under pressure, especially on a hectic bench in a noisy venue.

In this situation, it’s vital that you get that communication going again during the break. And, it’s not just the physical tactics that need to be addressed; the break also gives athletes the mental space to become calm and composed against, some fiery players need this time to get back on track.

The second reason why third quarters can often be decisive is all about the changes, made not just by one team but by both.

Often you have to be brave, I remember coming into the changing room at half-time in the 2016 Superleague Grand Final and we were 12 up against Manchester Thunder. All season we had been switching the team after 30 minutes. I asked them whether they could do another quarter and they all nodded.

We ended up losing the third by a fair margin, before they gave us a real battle in the final quarter, which we thankfully won. Afterwards, I remember being mad that I hadn’t backed myself with what had been working for us all season.

Can I bring myself to say it again….it’s the winning 3rd quarter 🤷🏼‍♀️
England needed ball and we’ll they got it 😂 sometimes gifted, sometimes brilliance, but it was strong, solid and it’s got to have given them game 2. @SkyNetball

A coach will have had 30 minutes to really assess what has been going on, and more importantly, the players have too.

The players who have been on the bench in the first half will have been able to take everything in, see what the opposition are doing and have a really good understanding of how to change things, if they’re given the chance.

Being an impact player is often a lot easier than grinding it out from the start. A lot of young players break into squads wanting it all now, but to stay at the top level you have to perform consistently.

Having that time on the bench to watch, learn and then execute after 30 minutes, is a much kinder way to make a breakthrough. A wise coach once told me it’s easy to get in the squad, it’s harder to stay there. The final thing that’s also really important at half-time is anticipating what the other team are going to do. This is where coaches really earn their stripes and show what they’re made of, and I think it’s something that perhaps gets overlooked.

Often when you’re winning, the conversation between the players is all about the good things that are happening and as a coach, you need to also highlight that the other team are likely to have noticed them too. You need to be a step ahead of them.

For example, if my team is getting the ball really easily in the first phase and it’s opening up the game, I would say that we’re doing that well but that I also think the other team are going to do X and bring on Y to counter it. So, I would give my players really clear instructions of what to look out for if that does happen over the next 30 minutes. 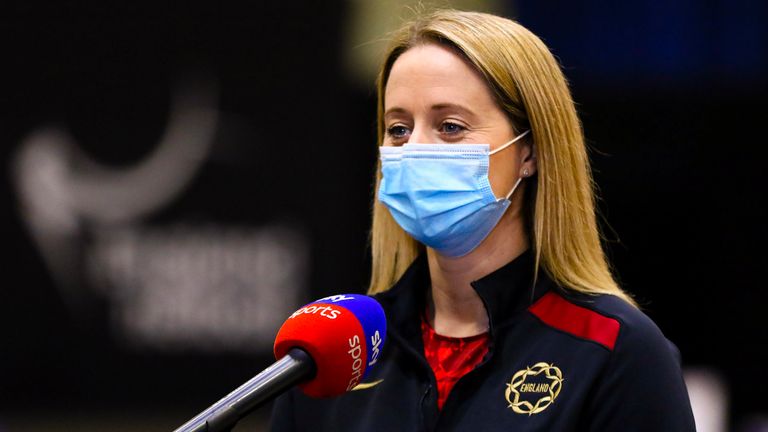 What really impressed me with England in the Vitality Netball Legends Series was that they took on the information Jess Thirlby was giving them and they executed those tactics in the third quarter. In all three games we saw them step up a gear, and really stamp their authority on the game.

Moving forwards, England will take confidence that, regardless of the score at half-time, they know that they can make changes, be given information and go out and execute. That’s going to be really important when it comes to playing against the likes of Australia, New Zealand and Jamaica, because that belief system gives them the confidence if things aren’t going their way.

It wasn’t just the third quarter where they injected something new. In the second game we saw a shift in the attack-end to mean that the group played a lot wider to open up space, as well as a shift on first phase and second phase to create depth.

One thing I will say though, is that at some point Jess Thirlby will probably want to see her starting seven stay out there in a match and see if they can sort things out themselves, as opposed to relying always on changes being made. I sometimes feel we rely heavily on changes to fix issues rather than information to current players out there.

Overall, the Roses should be pleased with the development they showed over the course of the Vitality Netball Legends Series. They showed that they can adapt tactically, that they have a range of styles and a whole heap of talent to pick from. Right now, that’s an exciting position to be in.