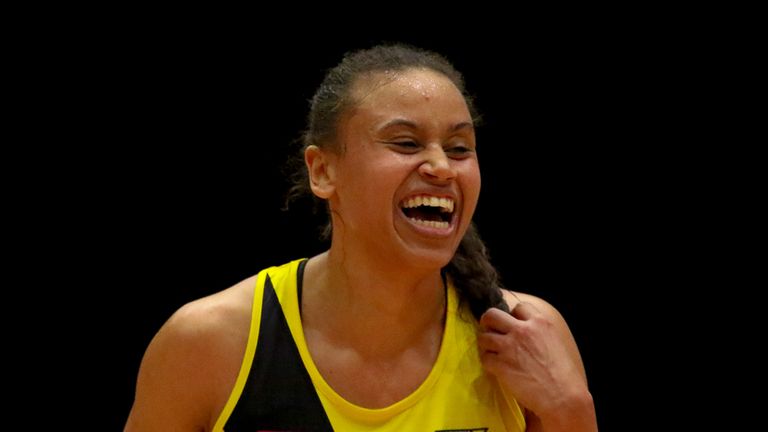 Manchester Thunder moved up into the top four after a second successive victory in Round Nine of the Vitality Netball Superleague.

Karen Greig’s outfit added a 59-37 result against Saracens Mavericks to the impressive way in which they ended Loughborough Lightning’s seven-match winning streak on Sunday.

Meanwhile, in the first match on Monday evening, London Pulse finished the round on a high as they beat Melissa Bessell’s Severn Stars by five goals.

If you did miss any of the action, then you can watch every match back in full on the Sky Sports YouTube channel and the competition returns on Friday with a 10-match weekend.

Thunder turn it on against Mavs

Manchester Thunder, the 2019 champions, showed that they’re getting into an excellent rhythm as they backed up their performance against Lightning with another assured outing on Monday night.

After seeing Mavericks beat Team Bath Netball the previous day, Greig’s team knew they needed to start fast, and they did.

Thunder put the building blocks in place during the opening minutes, before they pressed down hard on the accelerator and kept their foot there for the whole of the first half.

Elia McCormick and player of the match Laura Malcolm were tenacious in defence, while Amy Carter and Caroline O’Hanlon picked up where they left off on Sunday and showed their creativity in attack.

With Eleanor Cardwell and Joyce Mvula being such a tight unit, Mavericks weren’t able to gain the same amount of ball as they did against Bath. That was proving to be costly and it meant that Thunder were able to create a 30-20 lead at the interval.

With their head coaches’ words ringing in their ears and personnel changes for Mavericks, both teams upped the ante in the third quarter and there was plenty of body-on-body as it played out.

Mavericks’ confidence grew as they found shooter Britney Clarke, who’d arrived on for Ine-Mari Venter earlier in the match, in good form, while in defence they hassled and disrupted Thunder more.

The reward was a much closer quarter, just 10-9 in Thunder’s favour, and although Mavericks began the last strongly, they couldn’t sustain it.

In contrast, the 2019 champions accelerated again. With Malcolm leading by example, they continued to add to their tally and didn’t let up for a moment. In the final minutes, Greig introduced a number of her players off the bench and the final 22-goal margin will have been noted by every other side in the competition.

London Pulse put in a strong first-half performance to finish Round Nine on a high with a 41-36 victory over Severn Stars.

The outfit’s third win of the season was built off the back of a confident start and connections at both ends of the court coming together.

Meanwhile, in the first two quarters Stars struggled to match Pulse’s height across court and found themselves under intense pressure in attack. Ahead of the contest, both head coaches highlighted how evenly matched the two teams were and the majority of the first quarter went goal-for-goal.

However, as the first half played out the dynamic Funmi Fadoju performed superbly at WD and alongside her defensive colleagues, she made life difficult for Stars.

Pulse then used the second quarter to really tighten their grip on the contest and their productivity meant that they led by 12 at the midway point.

After the break Stars hit back, as they backed themselves more in attack and found Georgia Rowe and Paige Reed more frequently in the circle. Not only did they force Pulse into making changes in their defensive end, but they won the quarter 11-9.

At 33-23 down, Stars knew that they had to make inroads into the 10-goal deficit quickly. Initially, they weren’t able to do that as the industrious Halimat Adio kept the pressure on Rowe, and Lindsay Keable’s arrival added further experience in the circle.

Then, with four minutes to play, Stars made their move. As the minutes ticked by, Bessell’s team grew stronger however when Adio stepped up at key moments, it meant that Pulse were able to hold firm and Stars ran out of time.

Sky Sports is your home of netball. The Vitality Netball Superleague continues on Friday with Round 10 and the start of a 10-match weekend, live on Sky Sports and streamed on the Sky Sports YouTube channel.