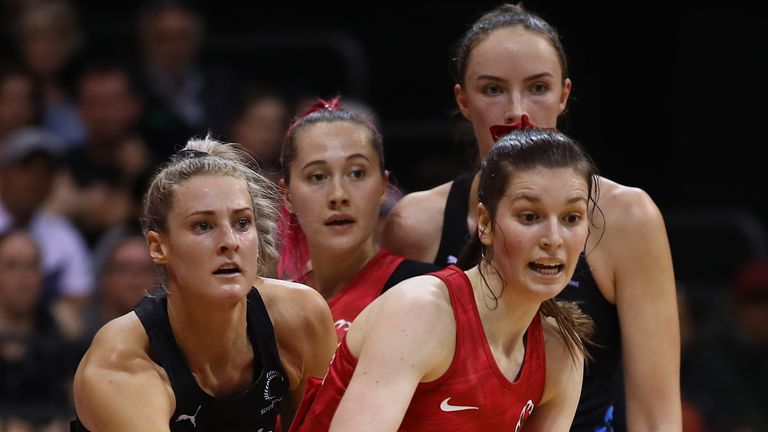 As England’s Vitality Roses return home from New Zealand, we take a look at four players who took their opportunity with both hands against the world champions.

Jess Thirlby’s outfit headed to New Zealand off the back of having played no competitive netball since March, and then they found themselves having to navigate the tour without their head coach being there in person.

Despite none of the three matches resulting in a victory, the touring party did make life uncomfortable for the world champions and they asked questions of them throughout.

Of Thirlby’s 16-player party, 10 had 15 caps or fewer going into the tour and when the heat was on, a number of her less experienced players stepped up. Here we take a look at four in particular…

The final Test of the series was the most overt showing of Razia Quashie’s talent.

She finished it with six gains and four intercepts and completed her third 60-minute performance of the series in style. Needless to say, the Roses’ head coach Thirlby was quick to praise her after the final whistle.

“I think that Razia has come of age [in this series],” Thirlby told Sky Sports.

“She’s been there or thereabouts in the squad for a while now so she’s not completely new to it [Test netball], but in this context she’s seized her opportunities.

“To have been able to reproduce her standards during each game, from start to finish, was incredibly impressive. I think it’s going to be one of the best positives for us to take away.”

Razia Quashie’s partnership with Fran Williams, and being able to leave that out there on court to really grow, was great. I’ve been speaking to both of them and I can sense that they’re really enjoying that opportunity and that time together.

Quashie, who was introduced to netball by her mother, is a natural reader of the game and has previously said that she’s keen to emulate the footwork and style of Geva Mentor.

A pleasing element for Thirlby will have been that Quashie wasn’t fazed by facing the world’s most in-form shooter right now, Maia Wilson. Instead, she saw it as a challenge and worked hard alongside Fran Williams to disrupt Wilson as much as possible.

QUASHIE!!! She was incredible & has huge potential. Also Drakeford-Lewis has really improved since Nations Cup too.

The other half of England’s defensive unit was also excellent when faced with the Silver Ferns’ captain and their superb shooter.

Fran Williams’ hustle was clear for all to see, as was her ability to pick off ball higher up the court and provide vital turnovers for the Roses.

Thankful for the opportunity provided by @englandnetball and @silverferns to play and represent netball right now. Not the result we wanted but lots learnt with an exciting team🌹⁣⁣The support has been incredible and we hope you enjoyed it as much as we did😆 pic.twitter.com/UKGdqInqOE

Williams may only have 16 caps to her name, but having being part of the 2019 Vitality Netball World Cup squad, means that she has actually amassed a great deal of experience during that time.

Clearly Thirlby is impressed with the 22-year-old’s leadership style too, having made her vice-captain for the series.

It’s a role she’ll continue to take when she returns at Wasps Netball and her competitive nature means that the presence of others within England’s squad will only further her development. 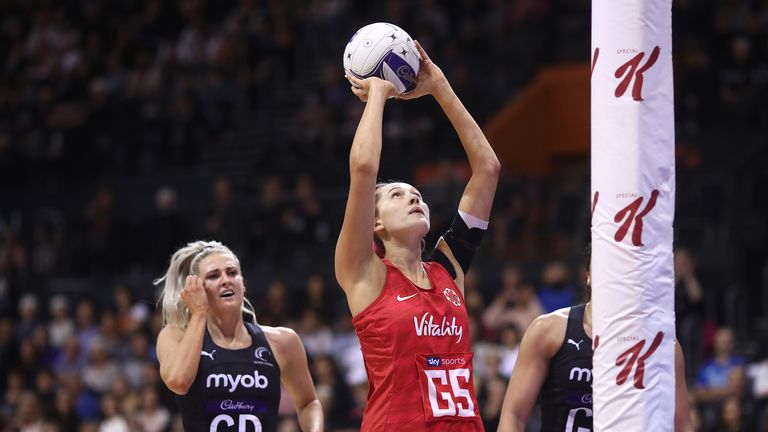 Upon hearing about their Test series against New Zealand, George Fisher would have been one of the most excited members of England’s squad due to her move to Southern Steel next season.

From the moment she stepped onto court in Hamilton, it was clear that she was out to impress her new head coach and New Zealand’s netball fans.

Fisher turned to post with confidence and physically, she looks fitter than she ever has done before. During the first lockdown, the former Saracens Maverick placed some of her at-home workouts on social media and in New Zealand, it was clear that they have paid dividends.

I feel that I learn and grow on every tour. Thankful for the opportunities. Thank you @SilverFernsNZ & @EnglandNetball for making this tour real. I can’t wait to be back in this awesome country where I’ve been made to feel so welcome. Bye for now. See you all soon. @SteelNetball pic.twitter.com/eu1kOLE6dw

“I think she’s putting her hand up in terms of her ability to shoot and go to post, I like her accuracy,” Southern Steel’s head coach Reinga Bloxham told Bridget Tunnicliffe at RNZ in New Zealand.

“It’s nice to see her muscle up against the physicality of our defence and not shy away from that.

“That was something that we talked about when she was going to be coming to this competition, so for her to experience that before she gets into ANZ is going to be vital for us going forward.”

Sophie Drakeford-Lewis went into this tour to New Zealand having made just two appearances for her country. Yet during this tour, she really stamped her authority on court and did it mostly, whilst up against an intimidating opponent in Jane Watson.

Watson is a formidable defender and one with the ability to make attackers think that they are an option before she pounces.

Across the three Tests, Drakeford-Lewis held her own. She used her speed to cut through the Silver Ferns’ zone and made the right moves inside the circle, which ensured that either she was an option herself or that her shooter could be.

Finally, it came to her shot, the young GA kept her fluid style well in the face of significant pressure and put up 23 of her 27 attempts at goal.