Warriors Alumni Hold Tight to Their Place in a Dynasty

TORONTO — At 31, Leandro Barbosa was the oldest player on the roster when he joined the Golden State Warriors before the start of the 2014-15 season. His teammates were so young, they might as well have practiced at recess. Stephen Curry was just beginning to edge toward global stardom, and the Warriors had not won an N.B.A. championship since 1975. Nobody was using the word “dynasty.”

“We were underdogs,” Barbosa said. “No one believed that we could go so far.”

The Warriors had signed Barbosa, a guard known as the Brazilian Blur, in large part for his experience, and he found himself surrounded by willing learners. He recalled how Curry and Klay Thompson were always peppering him with questions.

“They would just nod their heads and say ‘Thank you,’” Barbosa said recently in a telephone interview. “It’s kind of funny to think how big they are now.”

Barbosa was there for the start of what has been an exhilarating five-year ride for the Warriors and their fans, and a soul-crushing stretch for pretty much everyone else. Curry and Thompson — the Splash Brothers — were plenty good even then. But few could have anticipated all the records their Warriors would smash, and all the rings they would chase.

Golden State is now making its fifth straight appearance in the N.B.A. finals, facing the Toronto Raptors for a shot at a fourth championship in that span.

Barbosa left the Warriors in 2016 after two seasons that included the first title in the run, but he still feels a deep connection to the franchise — and to the sorcery that his former teammates continue to conjure. He is not alone. 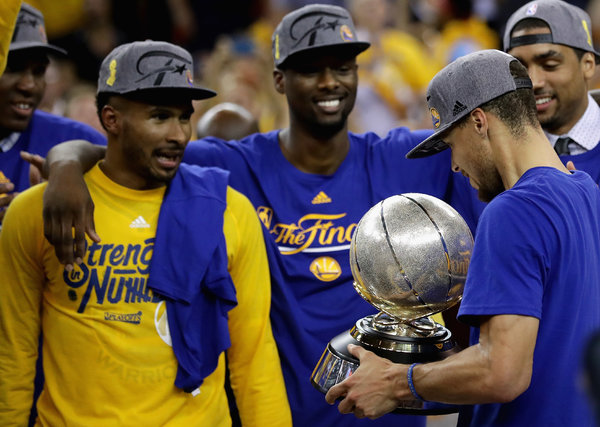 Curry and Thompson are among the five players who have been with the Warriors for the entire five-year stretch — a celebrated core that also includes Draymond Green, Andre Iguodala and Shaun Livingston. But the team has otherwise featured an evolving cast of characters: 38 players in all, including 21 who are no longer with the team. Some look back in wonder.

No team is static. Change for the Warriors has come in the form of 10-day deals, trades and free-agent signings. (For example, a bunch of guys were jettisoned to clear room for Kevin Durant in 2016.) The result is a long list of alumni.

Some were key contributors, while others barely vacated the bench. Some left on their own terms, while others were not given much of a choice. Patrick McCaw is with the Raptors this season after a contract dispute. David Lee got engaged to the pro tennis player Caroline Wozniacki. Marreese Speights spent last season in China. And there is Barbosa, now 36 and angling for an N.B.A. comeback after two years in Brazil.

“I still have a little juice left,” he said.

What many of the past Warriors share, though, regardless of their individual circumstances, are ties to the 12,294 points they scored, the 831 3-pointers they made, the championships they helped win.

Yet the run keeps going without them.

West, who retired last summer after two titles in two seasons with the Warriors, said he would probably still be playing this season if they had lost to the Cleveland Cavaliers in the finals a year ago. He wanted to go out on top, and he did that, helping Golden State sweep LeBron James’s hometown team out of the finals.

West has since tried to create some separation for himself. He texts his former teammates and coaches on occasion, but he has avoided the Warriors’ practice facility.

“I just needed a break from the game,” he said.

West and his wife have kept busy with a newborn whom he calls his “retirement baby,” but he would like to eventually return to the N.B.A. in some capacity, whether as a coach or as an executive. With that in mind, he said, he was well prepared through his time with the Warriors, learning about accountability from stars like Curry, Green and Thompson and about leadership from Coach Steve Kerr, who had an acute feel for team dynamics.

West recalled an otherwise humdrum game against the Phoenix Suns in February 2018, when everything was stale. Kerr could sense that his players had been tuning him out, and he told them as much before the game.

“So he basically let the players coach the team that night,” West said. “That’s something that will always stick with me, because I thought it was a huge risk on his part. But it was his way of getting through to the team, and it showed how much he understood his group. It was one of those aha! moments.”

(The Warriors, it should be noted, won that game by 46 points.)

James Michael McAdoo, a reserve forward who spent three seasons with the Warriors, from 2014 to 2017, keeps his two championship rings in a safe. He knows he was fortunate to start his career with the Warriors, just as they were on the cusp of big things. He was fresh out of college.

“Even halfway through my rookie year, no one had any idea of what it was going to become,” he said. “To have been on that team and to have gone to the finals three times, that’s something that no one can ever take away from me.”

McAdoo, 26, never had a formal conversation with the front office when his contract was up, he said. He could sense that his time with the team was over. His basketball odyssey has since included a stint with the Philadelphia 76ers and a season with Fiat Torino in Italy’s Lega Basket Serie A, where he played for Larry Brown — before Brown was fired.

“It was kind of a failed experiment,” McAdoo said. “But Italy was amazing.”

He has been so focused on his own career, he said, that he does not feel particularly connected to the Warriors anymore.

“I’ve only been gone for two years,” he said, “but it feels like forever ago.”

But McAdoo does keep in touch with his old teammates, and he laughed a couple of weeks ago when Iguodala started screaming at his hands after he sealed a playoff win against the Portland Trail Blazers by stripping the ball from Damian Lillard. McAdoo said he sent Iguodala a text message: “Bro, you’re hilarious.”

Barbosa is especially happy for Andrew Bogut, who rejoined the Warriors this season, nearly three years after he left. Bogut is the rare former Warrior who returned. Barbosa reached out when he heard the news.

“We made a little party on the phone,” Barbosa said.

As for his own experience with Golden State, Barbosa has just one regret: the way it ended, with the team blowing a three-games-to-one lead against the Cavaliers in the 2016 finals.

“It really hurts,” he said. “People in Brazil ask me all the time what happened that year, and I don’t know how to answer it. I still don’t know.”

That series was the exception, though, and Barbosa has fond feelings for the Warriors. He has made a handful of appearances at Oracle Arena in Oakland in recent seasons, joining fans in the stands as a spectator now, and he receives ovations whenever he is shown on the Jumbotron.

“They give me so much love,” he said.

It is heartening for Barbosa to know that fans remember the old days, back when the magic started. Like them, he hopes it never ends.