EDDIE HALL stepped up preparations for his boxing match against Hafthor Bjornsson – by bench-pressing four women!

Brit Hall will fight strongman rival Bjornsson later this year in what is dubbed the ‘heaviest boxing match in history’. 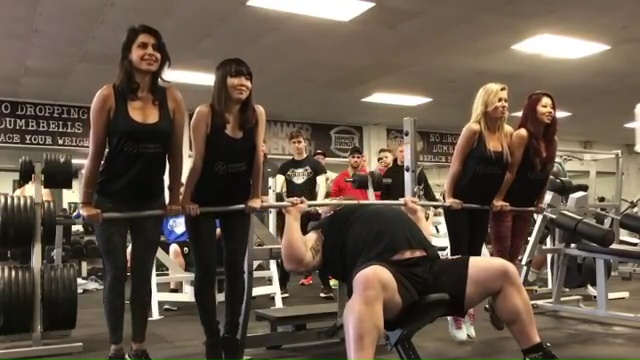 The duo are set to slug it out in Las Vegas in September.

They have been busy shedding weight ahead of the fight to be more dynamic in the ring.

He cut down to 25st 5lb in the summer – but that is still over two stone heavier than Nikolai Valuev, the heaviest champion in history.

A post shared by Eddie hall – The Beast (@eddiehallwsm)

Hall expressed concern in December that he had lost some of his power.

But his latest update from the gym shows that he's still got it.

In the clip posted to his Instagram page, two women jump on both sides of the barbell before Hall presses out three reps in front of an admiring crowd.

The clip wowed his followers.

One said: "Need to see a triple drop set Eddie."

A second commented: "My man didn’t have to flex this hard, but he did it for us."

Bjornsson, known as 'Thor', also showed off his weight loss last summer, having dropped to 29st through strict boxing training.

The Game of Thrones star called out Hall to a boxing match after breaking the 501kg deadlift world record last May.

Bjornsson will make his boxing debut next week against Steven Ward – a fighter 12 stone lighter than he is.