MOHAMMAD KARAKI was brutally knocked out last weekend after being on the receiving end of a nasty eye poke at UAE Warriors 20.

But his promotional bow soon turned into a nightmare following a crazy opening round, which saw both men score knockdowns.

Karaki's right eye was accidentally poked by Melillo during a wild exchange, which the Italian capped off with a beautiful counter left hook.

Karaki immediately grabbed his eye and turned away from his opponent, despite referee Frank Trigg not stopping the action.

And Mellilo made the former ONE Championship star pay for his mistake by sparking him out cold with a vicious right hand.

A furious Karaki, who is now on a two-fight skid, took to Instagram after the fight to appeal the controversial result.

He wrote: “If you are a fan of MMA you definitely know how often this injury happens and if you aren’t a fan of this game and never tasted such a thing let me tell you eye pokes are the worst you can ever have, extremely painful and you just have no chance to do anything your natural body response to it is to cover your eye. 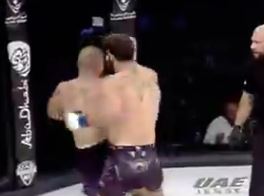 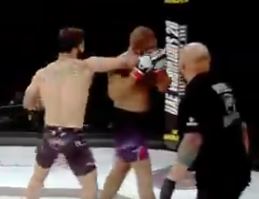 "I didn’t know what happened in the fight all I remember was a bright light in my right eye and extreme pain that had me to back up thinking the referee will stop to check on me .. didn’t happen and this was the end!

"I ask those in charge of the company to relook at the result and revise the output and be fair!

"Not asking for anything else, I know myself very well, I am extremely confident with my skills, I never complain about any output but this one my friends is my total right and I totally deserve a payback!."

Karaki wants the fight to be ruled a no-contest and to be given an immediate rematch.

He added: “If there's an eye poke, the referee gives the other fighter a warning to keep his fingers intact and give the sufferer fighter a breather to recover. PERIOD!

"I don’t care what commentators say or what anyone says I have been in this game for a quite enough time to know rules and regulations and I believe the referee’s only job is to protect two fighters going for a kill inside a closed cage!

"I blame no one for this, each one sees it from a different aspect however rules are always set to protect fighters!

"And I am claiming what is my total RIGHT! #nocontest and a rematch for sure.

"If you also think what I am claiming is right, share this post and tag me also tag @uae_warriors, @franktrigg thank you!”

Ex-Bellator star Melillo also took to social media after the fight, writing on Instagram: "I am very happy about my win last night in UAE Warriors.

"I am sorry for the way it played out but I am a fighter and I am trained to finish the fight unless the referee steps in.

"I understand the concern and the sadness from Mohammad's side and I was myself very worried about his health.

"I know he is good now and this is the most important thing.

"I am sorry to have bad feelings related to my fights but sometimes this is the way it is."