‘We want to make netball even bigger’: NSW in mix for 2027 World Cup

With those words, NSW Sports Minister John Sidoti launched the official bid for the 2027 Netball World Cup while overlooking Sydney Harbour on Friday. 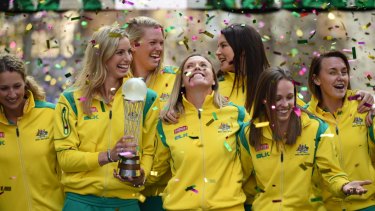 Shine on you crazy Diamonds: Australia could be out to replicate their 2015 home World Cup success in 2027 should a NSW bid win hosting rights.Credit:Brendan Esposito

If successful, Sydney and regional NSW will host the world's best netball players in the same year Netball Australia will celebrate its 100th anniversary.

"This is a collaborative effort to bring our worlds best netballers to our own backyard again and to help inspire the next generation of stars," Sidoti said.

"We have already seen the effect of hosting the World Cup four years ago has had on the participation rates and we want to capitalise on that legacy.

"We want to make netball even bigger right across our state and this great country."

The bid launch comes just 24 hours after it was revealed Australia would push to host the 2034 FIFA World Cup.

If successful, the Netball World Cup bid will provide an estimated $30 million boost to the NSW economy.

Hosting the tournament would also leave a "legacy fund", which will be invested directly into grassroots netball.

"A lot of these World Cup bids also come with a legacy fund," Sidoti told the Herald.

"The T20 (World Cup) cricket for instance, there is a legacy fund there now.

'That encourages participation, infrastructure upgrades that really make a difference to a sporting organisation that often doesn’t have the capacity to do that."

Economic windfall aside, Sidoti and Netball Australia want to inspire the next generation of Diamonds – particularly in regional NSW.

"We are encouraging our youth through all of our programs to be participate and be part of sport. We have to give them an end line, a the finish line, the ultimate," Sidoti said.

"It’s important, just for the well-being of children in particular and the next generation.

"There is so much stress, there is pressure, there is mental health (issues) and sport is a great medicine, it really is.

"I have noticed that from Wollongong to Newcastle to Sydney, there is a lot of common denominators and I think the more events that we take to regional NSW, the better it is.

"It’s an economy and we have to help our cousins in regional NSW."

"What an exciting day for netball, netball in NSW and netball in Australia," Fechner said.

"Netball Australia has a long and proud tradition of hosting World Cups and if we are successful in our bid for 2027, it will be no different.

"The process will start in earnest later this year and we promise our big will be bigger and bolder than anything we have ever seen with the support of the Berejiklian government and Netball NSW.

Fechner also believes hosting rights would be the perfect celebration of the game's 100th Australian anniversary.

"What better platform than a World Cup to celebrate our centenary," Fechner said.

"The sport is so proud of our history of empowering and connecting communities and we will work hard with our partners to ensure we are able to bring the World Cup to NSW in 2027."

The Diamonds kick off their 2019 World Cup campaign in the UK next month.