Home » Sport » What to Watch Thursday at Wimbledon

What to Watch Thursday at Wimbledon

Last month Nadal won his 12th title at Roland Garros, losing only two sets along the way. Although he has won just two Wimbledon titles, the third-seeded Nadal looks in fine form at majors this year, having also reached the final at the Australian Open. None of that will intimidate Kyrgios, the enigmatic player who can throw tantrums one minute and make subliminally difficult shots the next. Kyrgios has beaten Nadal three times, including in the fourth round at Wimbledon in 2014, when Nadal was the No. 1 seed. After Kyrgios defeated Nadal at the Acapulco Open in February, Nadal said he “lacks respect for the crowd, his opponent and towards himself.” Kyrgios lived up to this description in his first-round match, a five-set spectacle against Jordan Thompson, in which he alternated between joking with the crowd, admonishing himself for poor decision making, and trying to be conciliatory. Late Wednesday night, Kyrgios was even spotted by reporters at a Wimbledon Village bar. It’s hard to know which version of Kyrgios will show up Thursday, but, at the least, you can expect a match full of scorching forehands and high emotions under the watchful eye of the Centre Court crowd.

Just gone 11pm and Nick Kyrgios is still in the Dog and Fox, the night before he plays Rafael Nadal on Centre Court. No sign of Nadal for that beer… #Wimbledon

Thursday’s lineup is so star-studded and full of British players that even Roger Federer and Serena Williams are playing on No. 1 Court instead of Centre Court. Barty, the world No. 1 and the recent French Open champion, was relegated to No. 2 Court. She carries a 14-match winning streak into the first match of the day on that court (6 a.m. Eastern). She is against Van Uytvanck, who won her first round match in a tough three-setter against Svetlana Kuznetsova, a two time Grand Slam winner. Look for Barty to continue using the same strategy that helped her win at the Eastbourne International, deep slices that will pull her opponents out of position and allow Barty to finish off the points at net. 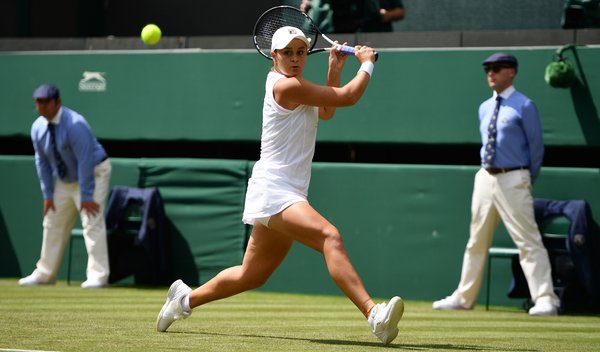 Konta, the 19th seed and top-rated Briton in the draw, reached the semifinals of the French Open this year. She will face off against Siniakova, last year’s doubles champion at the All-England Club, in the second match on Centre Court. Although Siniakova has not had a good grass season, she did beat Naomi Osaka in the third round at the French Open, using her shot selection to disrupt Osaka’s powerful baseline play. Konta will rely on the faster bounce off the grass to assist her in overwhelming Siniakova’s defensive capabilities.

Murray, a two time singles champion at the All England Club, continues his slow return from a hip injury at Wimbledon. Murray last played doubles at the All England Club in 2005, but recently won the Queen’s Club doubles title alongside Feliciano Lopez. To help him at Wimbledon, he’s recruited the doubles specialist Herbert, who has won four Grand Slams in doubles — one at each major. On the other side of the net, Humbert has been having a good week, having beaten Gael Monfils on his way to the third round in singles, where he will face Felix Auger-Aliassime. Copil lost a tough match in the first round against Guido Pella, one which could have ended differently had Copil not lost the first tiebreaker, 13-11. Humbert and Copil will be significant underdogs against the seven combined Grand Slam championships across the net.