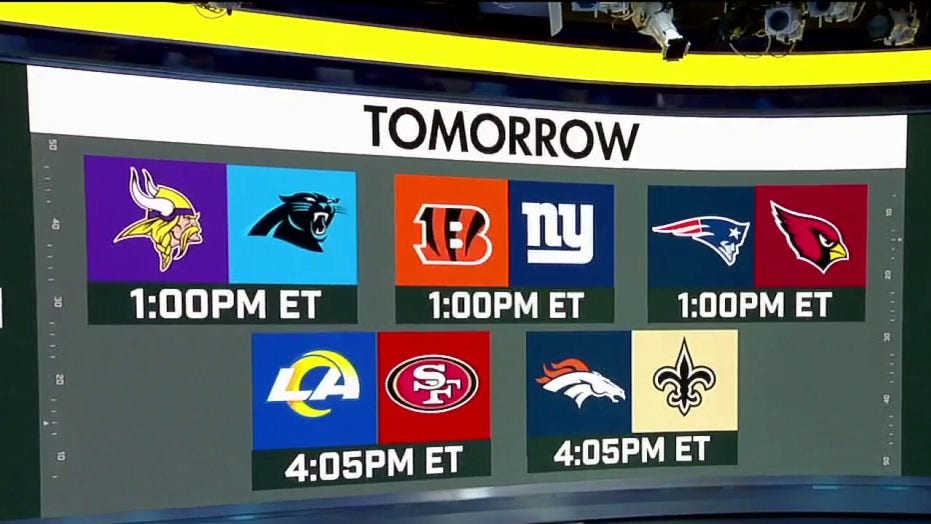 In two of the last three weeks, we’ve seen some of the worst teams in the NFL start to turn a corner when it comes to covering the spread. Will that trend continue this week, when fans have a chance to win $100,000 absolutely for free in the FOX Super 6 NFL Challenge?

It’s easy to forget – these are professionals who take pride in their work. And the point spread is the great equalizer. Outside of the extremes – KC and a few teams at the top, the Jags and Jets at the bottom – the other 25-ish teams aren’t separated by much.

The Panthers defense played well against the Lions last week – 185 yards allowed, zero trips to the red zone permitted – but let’s not forget how they allowed the Bucs to score on eight straight possessions two weeks ago. Plus, the Lions were missing their best skill position players, D’Andre Swift and Kenny Golladay.

Carolina is second in the NFL in missed tackles (85), which is not ideal going up against Dalvin Cook, who leads the NFL in rushing yards per game (118.8). The Vikings secondary was torn apart by Andy Dalton (68 percent completions, 3 TDs), and whoever starts for the Panthers – Teddy Bridgewater or PJ Walker – could have success as well.

Just remember that Bridgwater started his career in Minnesota with Mike Zimmer, so there’s some familiarity there. Vikings by 4-6 points.

The Cardinals head to the East Coast for their third 1 p.m. start this season (they beat the Jets and lost to the Panthers the other two times) in a game with huge playoff ramifications for both teams.

This will be the fourth running QB the Patriots have faced in the last five weeks, and running QBs have given Bill Belichick some problems. Josh Allen has rushed for 92 yards and 2 TDs combined in his last 3 games vs the Patriots; Lamar Jackson in his last two games totaled 116 rushing yards; and DeShaun Watson rushed for 36 yards last week.

Kyler Murray should have success through the air and on the ground, but the Patriots will be able to batter a soft Cardinals run defense sorely missing Chandler Jones and Corey Peters in the middle and safety Jalen Thompson on the back end. Seattle controlled the clock with 165 rushing yards last week vs Arizona, and expect Belichick to try and do the same with Damien Harris. Cardinals by 1-3 points.

The last time these two teams met, Miami blanked Joe Flacco 24-0. Now, the Dolphins are coming off a loss to Denver in which they permitted 189 rushing yards.

The winless Jets, who have covered in three of their past four games, rank last in the NFL in pass defense, and allowed rookie Justin Herbert to go 37-for-49 for 366 yards and 3 TDs last week.

Now, New York faces a game Ryan Fitzpatrick who has a lot to prove. Dolphins by 10-12 points.

Nobody is going to want to bet the Falcons this week after Matt Ryan was sacked eight times and Atlanta lost to Taysom Hill.

Everyone is going to want to bet the Raiders after a huge national TV audience watched Derek Carr go toe-to-toe with Pat Mahomes. The Chiefs are the best team in the NFL; the Raiders have covered twice against them and won one.

Yet the Raiders didn’t sack Mahomes and only hit him once last week; if Matt Ryan has time, he’s going to find Calvin Ridley and Julio Jones wide open against a subpar Raiders secondary. Grady Jarrett and the Falcons' surprisingly stout run defense (10th in the NFL) removing Josh Jacobs from the game means we could be looking at a 38-35 type shootout. Falcons by 1-3 points.

Joe Burrow’s season-ending injury was devastating to the Bengals last week. They led Washington 9-7 and moved the ball easily before he went down. They were outscored 13-0 the rest of the way, as all backup Ryan Finley could generate offensively was a meek 25 yards in 21 plays. But Finley was facing Washington’s pass defense, which is fourth in efficiency; the Giants are 29th.

And while New York is coming off a bye week, there’s a chance it could have derailed momentum – they had won two straight while rushing for over 150 yards in each game. The Bengals just let Washington rush for 164 yards, so expect the Giants to hammer away on the ground. And oh yeah, second-year coach Zac Taylor is dealing with an ugly “toxic culture” story this week.

It’s tough to take a 3-7 Giants team as a significant favorite with all of that swirling around, but backing Finley here might just ruin your holiday weekend. Giants by 7-9 points.

The Saints are not playing defense like they did through the first eight weeks, when they were shredded by Justin Herbert, Derek Carr, Aaron Rodgers and Teddy Bridgewater.

In shutting down Tom Brady three weeks ago and Matt Ryan (eight sacks) over the weekend, New Orleans instead has vaulted into third in defense in the NFL. They are the only team to rank in the Top 10 marks in offense (fifth), special teams (fifth) and defense according to the Football Outsiders efficiency metrics.

I had New Orleans in a blowout before that, so naturally, I'm still going with the Saints by a whole heck of a lot. Saints by 13+ points.