Home » Sport » Why Joseph Suaalii should choose rugby over league

Why Joseph Suaalii should choose rugby over league

Suddenly things were quiet … maybe a little too quiet.

From speculation about the schoolboy footballing prodigy Joseph Suaalii being at fever pitch – has rugby secured him from the clutches of league, or versa-vicky, both for fabulous sums of money – suddenly there is near radio silence. 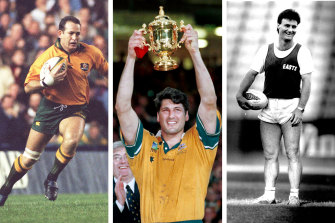 The answer has to be hands-down rugby union every day of the week and twice on Saturday afternoons.

This is not, despite the bleating you will soon hear, a matter of me disrespecting rugby league. The NRL puts out a great game and in recent times – not that you care – I have preferred watching it to rugby union. It's fast, furious and on a good day, full of spectacular action. In Australia it has many times the footprint of rugby union.

But for your purposes it comes with two huge downsides.

They tell me you are not the kind of young man to think in terms of your "brand", which is to the good – and you shouldn't start now. But as you weigh up your decision, there is one incontrovertible truth that needs to be factored in. That brand has a value which can be monetised. And there is no doubt that turning out for, say the Rabbitohs, NSW and the Kangaroos would see a big return on commercialising that brand.

But comparing that to the value of the global brand you'd have by being a household name around the planet, and not just the East Coast of Australia?

Joseph, there is no comparison. And as big as rugby is now globally, it is growing exponentially, with huge increases in audiences in America and Asia particularly.

The other factor is to compare the amount of punishment your body will take in the two codes.

You likely haven't heard a lot of Brett Papworth, a brilliant Wallaby of the mid-80s, but his is the name that most comes up when I ask rugby people to describe your skills. Like you, Brett could step brilliantly off both feet, pick gaps that no-one else could see and somehow jink through defensive lines without losing any speed before accelerating away from grasping hands.

He had to face a decision like you and ended up going to rugby league for a huge amount of money at the time. I can't remember now if he played six games or seven games over the two or three years of his contract, but it was no more than that and his constant litany of terrible injuries were shocking. I don't say the same will happen to you, and Ricky Stuart is a case in point of a brilliant rugby union player who turned out to be even better as a rugby league player.

But again, there can be no doubt whatsoever that league is the more brutal game. Rugby league types boast of their game's toughness, and for good reason – it is likely the toughest football code of the lot. With some notable exceptions like Cameron Smith, players tend to get smashed up a lot. (My favourite rugby league quote of all time comes from former halfback Geoff Toovey who, upon his retirement was asked what operations he had had in his career and replied: "The usual reconstructions.")

And the final factor is this. Think of the honour, the glory, the satisfaction of being part of a team that wins an Olympic gold medal. Sport has no higher prizes. You have the opportunity to be part of the Australian Sevens team that might win it, and turn your back on it? Say it ain't so! 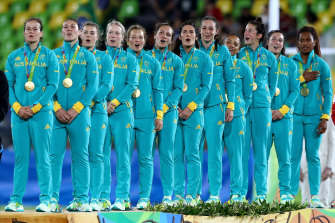 A chance at Olympic gold? Surely rugby is the place to be?Credit:Getty

In sum, this really is a no brainer.

In a choice between a brilliant and brutal local football code, and a globally glorious one that is way less physically punishing and offers the possibility of an Olympic gold medal to boot, there actually is no choice.

choo, Joseph, should, Suaalii, why
Celebrities