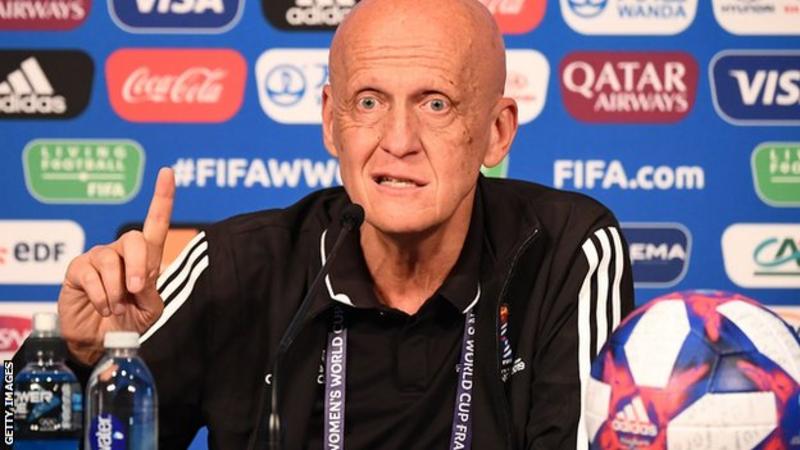 Fifa says it has been “surprised” at criticism over laws regarding goalkeepers encroaching at penalties.

World football’s governing body says the same rules have been implemented across all competitions from 1 June.

It claimed VAR helped referees reach a 98.18% accuracy rate in decision-making during the group stages in France.

“The only issue, apparently, concerns penalty kicks,” said Collina, who is chairman of Fifa’s referees committee. “And honestly we have been a bit surprised.

“VAR cannot be blind, cannot ignore. If you have a tool that offers you the possibility to check, you have to check.”

Without VAR, Fifa says the group-stage accuracy rate for match-changing plays – those leading to goals, penalties, red cards or instances of mistaken identity – would be down to 92.51%.

“We can never be perfect. No one player, no one coach is perfect,” added Massimo Busacca, head of Fifa’s refereeing department. “We are not perfect. What’s the problem?”

Asked why there had been more problems at this tournament, Collina said VAR’s success rate was “not very different to last summer” at the men’s World Cup in Russia.

“What is important to me is that the decision taken in the field of play is correct and very few mistakes which were committed so far did not affect the result of any game,” he told BBC Sport.

Why is new law causing controversy?

New laws which came into effect on 1 June and were outlined by the International Football Association Board (Ifab) mean a penalty kick can be retaken if goalkeepers are spotted advancing.

Scotland goalkeeper Lee Alexander saved a late penalty in her side’s 3-3 draw with Argentina but a retake was ordered after VAR ruled she had moved off her line before the kick was taken.

The retake was scored and Alexander became one of three players booked for encroachment during the tournament so far.

France also benefited in a group game when a penalty against Nigeria hit the post.

VAR determined that Nigeria keeper Chiamaka Nnadozie had moved off her line early and Wendie Renard scored the winner from the second spot-kick.

Italy scored their first goal in a 5-0 win over Jamaica with a retaken penalty after goalkeeper Sydney Schneider was punished for moving off her line in saving the initial spot-kick.

The decisions were correct according to the new laws, although Fifa has since said goalkeepers will not be booked if they break the rule during a shootout.

Collina said football’s law-makers had changed the rule to help goalkeepers by allowing them to just have one foot on or level with the line rather than two.

“We acknowledged that saving a penalty by keeping two feet on the goalline until the taker kicks the ball makes the goalkeeper’s job almost impossible,” he added.

“If something is written in the laws of the game it must be respected.

England boss Phil Neville said this Fifa had “major decisions to make” over the use of VAR after controversy around decisions dominated the group stage, while Manchester United Women manager Casey Stoney said it was “ruining the game”.

Media playback is not supported on this device

Collina denied claims teams at the tournament in France were being used as “guinea pigs”, saying new rules are always implemented from 1 June and that has previously been the case at men’s World Cups.

“Were the World Cup in ’98 and Euro 2016 considered as guinea pigs because a new law was implemented?” he said.

“New laws are implemented on 1 June, tournaments played in summer are played with new laws. This is something that has been going on for many years.”

Speaking at a media briefing, he added: “We didn’t consider the Women’s World Cup, which is our flagship tournament in 2019 as a World Cup, we cannot consider this competition as an experiment.”

The Premier League has said it will use VAR for the first time for the 2019-20 season but will not use it to rule on goalkeepers moving off their line to save a penalty.

Professional Game Match Officials Limited (PGMOL) will leave such decisions to on-field officials, although it could review the situation during the season.

However, Collina said he was unaware of this and “the rules of the game must be enforced in every country and competition”.

“You cannot decide how to enforce the rules of the game,” he said. “If you don’t like something you need to respect the laws of the game, that is what we are enforcing here in France.”