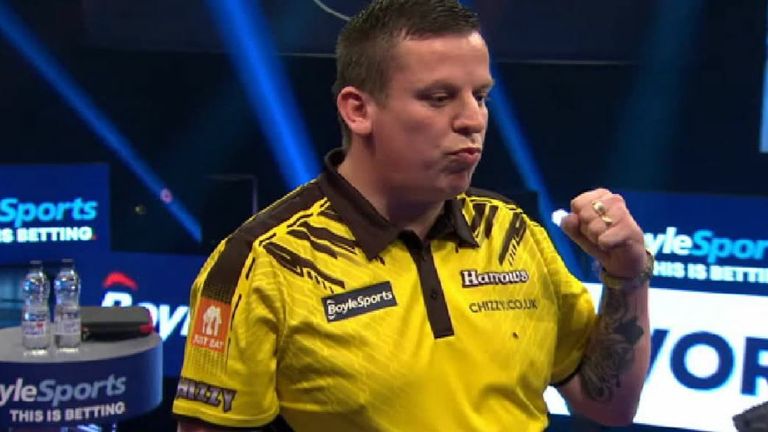 Ryan Joyce delivered the shock result of the night as he marked his World Grand Prix bow by eliminating world champion Peter Wright.

Gabriel Clemens accompanied Joyce as yet another seed-slayer by knocking out Nathan Aspinall, while the outstanding Dave Chisnall breezed past Glen Durrant to set up a meeting with Joyce in the next stage.

Gerwyn Price will join Michael van Gerwen as the only other seeded player in the second round after he overcame 2019 quarter-finalist Jermaine Wattimena. Daryl Gurney, who won the Grand Prix in 2017, was also beaten by the impressive Joe Cullen.

Simon Whitlock and Jeffrey de Zwaan meanwhile entered the fold as the respective replacements for Adrian Lewis and Stephen Bunting, both of whom tested positive for coronavirus and were therefore forced to withdraw from the tournament at late notice. While Whitlock brushed aside Chris Dobey, De Zwaan followed suit by making the most of his opportunity with victory over Jamie Hughes.

Joyce knocks out the world champion

Debutant Joyce produced the upset of the evening to stun Wright with an outstanding performance that included 10 ton-plus visits, six scores of 140 or more and one maximum. 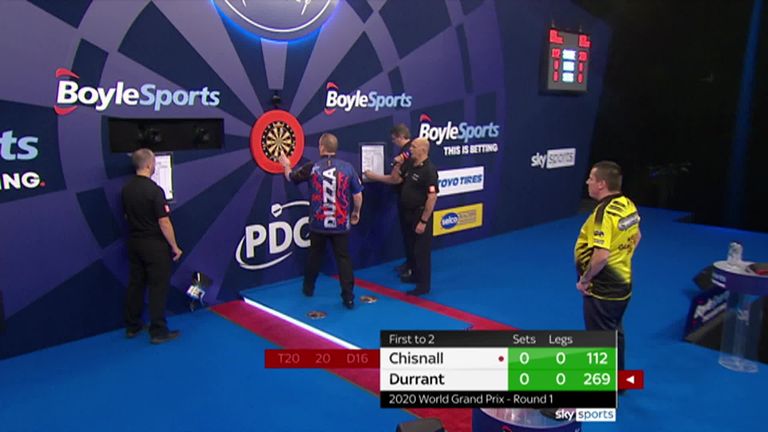 ‘Relentless’ mopped up 36 to take first blood before finishing off 92 and then checking out 51 for the set following a superb 180 set up shot.

The 35-year-old, who only joined the PDC in 2019, remained resolute amid Wright’s efforts to fight back in the second as he finished 69 to level it at two legs apiece before sinking double eight for the win after Snakebite had missed two darts at the double.

A red-hot Chisnall awaits him after he came out the blocks at blistering speed against Durrant to cruise to a place in the second round having averaged above 100 for much of the contest. 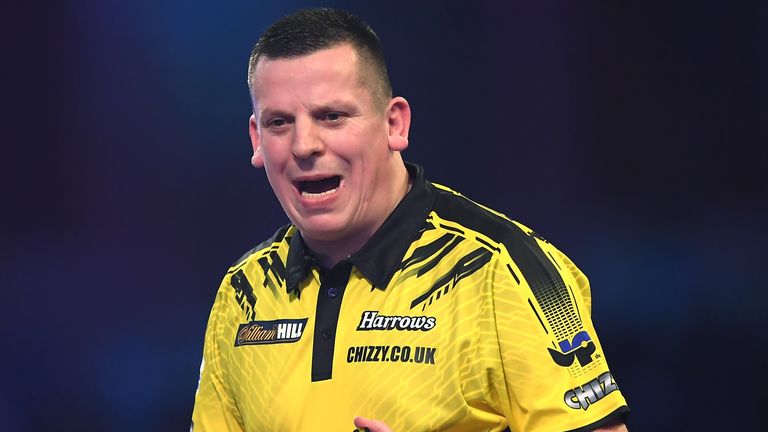 The 2019 World Grand Prix finalist opened with a 15-dart leg followed by a quick-fire 11-dart break, before Duzza took out a superb 97 to get himself back in the match.

Chisnall continued to benefit from the double-to-start format, though, and returned to wrap up a first set in which he averaged 104.95.

His excellent scoring refused to waver, Chizzy taking the first leg in the next set and starting the second with a 160 visit before seeing Durrant miss double tops for a 135 checkout.

Chisnall came back to make it 2-0 and then threw seven perfect darts to put him in the ascendency en route to winning the set and the match. Durrant recorded just one score of 140 or more on the night.

Price shows his class against Wattimena

Having lost 7-0 to Price as a Premier League challenger on Judgement Night in August, it was Wattimena who started the better as he secured an early break before checking out 76 to go two up. 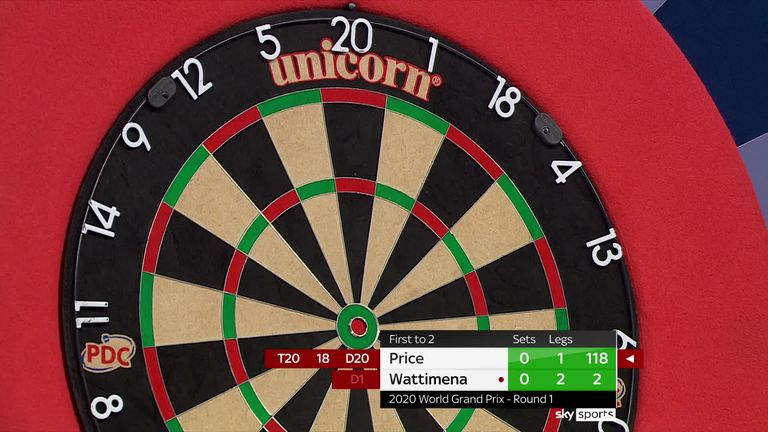 Price’s reply was emphatic, the Welshman getting himself off the mark, then capitalising on Wattimena’s miscue on double one to clean up 118 and pinning double five to make the first set his after his opponent had missed two darts to win it.

For all of Price’s efforts to dictate the tempo, Wattimena retained his rhythm from earlier in the game to go 2-1 ahead in the second set, but the world No 3’s class continued to show and he soon sealed the win with a clinical double 12.

He will face Kim Huybrechts, who opened the evening by coming from a set down to beat former World Grand Prix runner-up Brendan Dolan.

Dolan had looked in command in what was a back-and-forth matchup as he was handed the chance to throw for the match at 2-2 in the second set, but to no avail.

Clemens took advantage of a slow start from the 2019 UK Open winner by going 2-0 up after Aspinall had failed to take out 92. 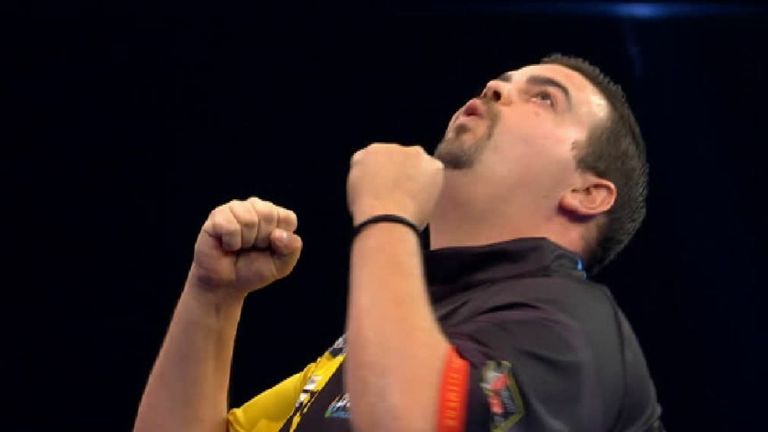 The Asp began to grow into the contest and it showed as he made light work of 72 to hit back, however proceeded to take eight darts to get away on the double in the next leg. That paved the way for Clemens to secure the opening set via double four having bust on 92, fallen short on his return visit and then been afforded a third and final attempt.

The opening leg of the second set went to Aspinall, who was then gifted the second when Clemens missed double 16 for a 109 finish and then three darts at double eight upon his return to the oche as his opponent made sure with double four.

Clemens refused to go away and sent 85 on its way via the bullseye before breaking back on double 16 to prompt a frustrated look from Aspinall. He confirmed the win in the next leg by finding double 10 on his third match dart after Aspinall had missed double tops for a 54 checkout to keep himself alive. 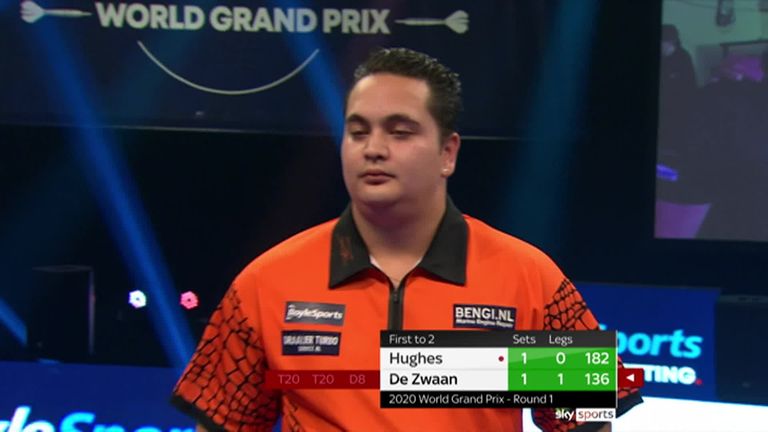 In the final match of the night, De Zwaan went ahead with an 80 checkout in what proved a slow burner, with Hughes eventually levelling the score having exchanged poor visits after busting on 92. The Dutchman found double 10 to restore his lead in the next leg and wrapped up the set with a 53 finish on double tops.

The 24-year-old took out 40 for an immediate break in the second set, however Hughes recovered to reel off three straight legs and make it all square after nailing double 16.

De Zwaan turned on the style in the third with a 90 checkout to start it, a 136 to extend his lead and then a confident 72 to finish Hughes off.

Cullen holds his nerve to see off Gurney

The tricky Cullen reminded all of his ability from the off in his win over Gurney, opening with an 11-darter before dispatching 76 to chalk up a slick first set. 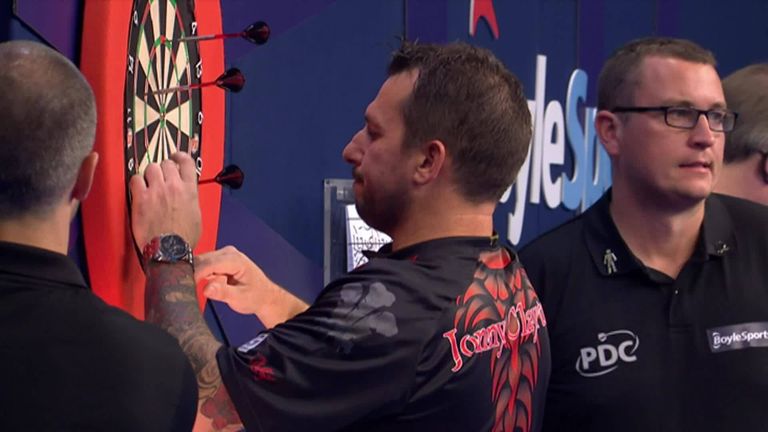 Gurney replied with an 80 checkout for a 14-darter to start the second followed by a 73 finish to take control. Cullen came back with a 14-darter and was then afforded a return visit to take the fourth leg having squandered a chance on 100.

Having missed tops for the match while facing another 100 checkout, Cullen was punished when Gurney pinned double 16 to win the set.

Cullen built himself a 2-1 lead in the decider but saw a slow start to third leg invite Gurney to level it up once again. Nevertheless, ‘The Rockstar’ held his nerve for a match-winning double tops.

He will play Jonny Clayton after the UK Open semi-finalist fended off Ian White 2-1 with a 106 checkout to seal the win.

Clayton flew through the first set before seeing White respond with a 104.7 average to claim the second, but the Welshman would not be denied as he kept his composure to weather a tense finish.

In the night’s additional match, Dobey might well have been left wishing it had been Lewis he had faced after he was subjected to an imperious display from Whitlock.

The Australian dropped just one leg and averaged 101.12 in the match, finishing the job with a 49 checkout for one of the performances of the first round.

Darts is back on to Sky Sports throughout October with the World Grand Prix and the Premier League Play-Offs. Follow us @SkySportsDarts to stay up to date with all the news.