Tokyo: There are nearly 8 billion people in the world. The second tallest of them all is an Iranian man in Tokyo spending most of his time sitting on a Paralympic volleyball court.

Meet Morteza Mehrzad, whose sitting volleyball team will play in their semi-final against Bosnia Herzegovina on Thursday. 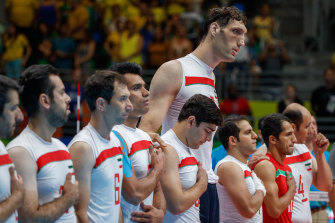 He is the Tiger Woods and Roger Federer of his sport, for a reason that isn’t hard to work out.

Mehrzad is a whopping 246 centimetres tall, equivalent to eight feet one inch.

To put Mehrzad’s incredible frame into perspective, the height of a standard door in Australia is 204cm, and the winning gold medal jump in the men’s high jump at the recent Olympics was 237cm.

Mehrzad is the equal second-tallest living man in the world, behind Turkey’s Sultan Kösen.

But like so many individuals well over two metres tall, Mehrzad’s upbringing was difficult. He attributes sitting volleyball as the light that saved his life after having few friends as a child due to his disability. 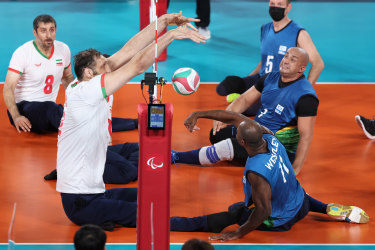 Mehrzad blocks a shot in a match against Brazil this week. Credit:Getty

In 2011, five years before the Rio Paralympics, Iran national coach Hadi Rezaei was watching a television program in his home country that highlighted people with a physical impairment and unusual talents.

Rezaei quickly got in contact with the television network about Mehrzad, who appeared on the program. He had been diagnosed with acromegaly at a young age – a condition that causes the body to produce too much growth hormone.

At age 16, Mehrzad fell off a bike and fractured his pelvis, which caused his right leg to stop growing, and the limb is now 15 centimetres shorter than his left leg. He has to use a walking stick. 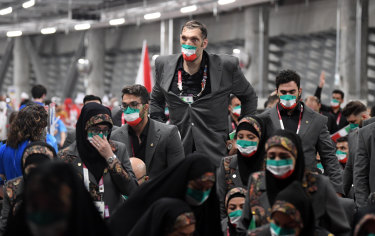 Mehrzad preparing to walk into the Olympic Stadium for the Tokyo Paralympics opening ceremony. Credit:Getty

“It is my duty as a coach to discover players, to find talents and teach them,” Rezaei said this week in Tokyo.

Rezaei convinced Mehrzad to take up sitting volleyball, a Paralympic sport for individuals who have various impairments, and by 2016 he was in Iran colours.

“Due to my impairment I was very depressed,” Mehrzad said. “I felt like I was in prison and was afraid to go outside due to my appearance. I could never imagine such a future for myself.

“Sitting volleyball has had an immense impact on my life.”

Mehrzad’s ability to block and spike from a far greater height than his opponents helped Iran win a gold medal in Rio. He scored 28 points in the gold medal game against Iran’s fierce rivals Bosnia and Herzegovina.

On the court, while sitting down, Mehrzad has a highest recorded block reach of 1.96m, to go with a highest spike reach of 2.30m, which is a nightmare for other teams.

“We have to sit shorter to the net because of the angle he can hit and that’s how we can defend some spikes from him,” said German player Florian Singer.

Rezaei tries to deflect attention away from his star player.

“I don’t consider one player the best, I consider them a team,” Rezaei said. “Morteza is not finished improving yet. He needs more time to improve and become a more complete athlete.”