Home » Sport » Yankees, Coming Off a Hot Streak, Slog Through an Ugly Loss

Yankees, Coming Off a Hot Streak, Slog Through an Ugly Loss

The Yankees probably knew it would not be their day the moment James Paxton allowed a leadoff home run to Charlie Blackmon. The missile shot landed in the right-field seats and set the tone for a dreary Sunday afternoon in the Bronx.

Paxton was knocked out in the fourth inning, the Yankees allowed four unearned runs over all, and what had been a hugely successful homestand ended with a forgettable 8-4 loss to the Colorado Rockies.

With a 5-5 record and an E.R.A. that is now back above 4.00, Paxton blamed himself for his continuing problems in the first inning and his overall lack of consistency.

Still, the law of averages suggested a Yankees stumble would be coming soon: Before Sunday’s loss they had won five in a row, part of a stretch in which the team had won seven of nine and 16 of 19 at home. During that time the Yankees opened up a commanding lead in the American League East — now nine games ahead of the second-place Tampa Bay Rays — that makes it increasingly hard to imagine them collapsing in the second half.

The cushion is large enough to absorb the occasional clunker like Paxton’s, in part because Manager Aaron Boone said the Yankees were “hungry” as they pulled away in the division, realizing “we have a chance to do something special.”

The question, however, is whether the starting rotation can be trusted in October to handle the Minnesota Twins and the Houston Astros, the Yankees’ two remaining challengers in the American League. This week’s three-game series with the Twins should be telling. As Luke Voit said, “they’re right behind us for most wins, so they’ll be out to get us.”

The Yankees and Astros are tied for the American League lead with 64 wins, while the Twins have 60. The Los Angeles Dodgers lead the majors with 67. 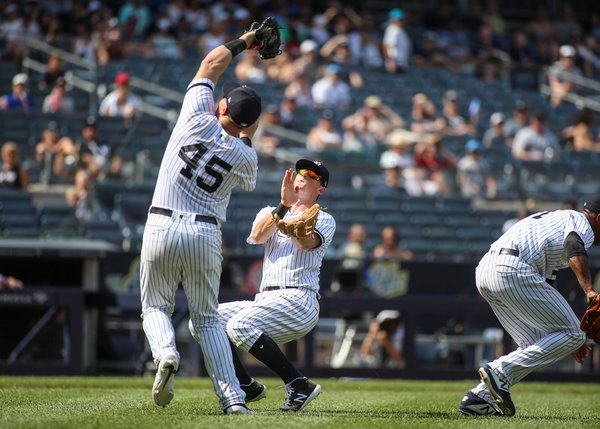 But short-term gains in the standings for the Yankees are less important than getting a clear picture of the trade market and whether the team can find another starter. General Manager Brian Cashman has made no secret he is searching — and Paxton’s performance no doubt steeled Cashman’s resolve to find another arm. But members of the organization say there are few, if any, serious talks going on.

The market, which a few weeks ago might have been robust, has dried up as teams have suddenly become wild-card contenders, making them no longer interested in hearing from Cashman.

With time running out on the possibility of acquiring the Cleveland Indians’ Trevor Bauer or the San Francisco Giants’ Madison Bumgarner, no momentum in discussions with the Toronto Blue Jays for Marcus Stroman — and zero chance of landing Max Scherzer from the Washington Nationals — Cashman might have to gamble on the return of the right-hander Luis Severino. He has been on the injured list all season with shoulder and lat problems but is on schedule to start throwing by the end of the month.

Severino, the youngest and most dynamic of the established Yankees starters, could theoretically be the weapon they use against Houston’s Justin Verlander in a season-deciding contest. But what if the Yankees’ fate came down to one game with Paxton? Boone insisted he still had faith, praising him as “someone we’re going to lean on down the stretch and into October.”

But Paxton, a left-hander, conceded that he had failed to live up to the Yankees’ expectations. He was especially frustrated by the chronic early turbulence — highlighted by Blackmon’s home run — and the complete collapse two-plus innings later. Over all, Paxton has a 10.12 ERA in the first inning this season, which he admits is confounding.

“I haven’t figured that out yet,” Paxton said, adding that he “didn’t have a good feel for where my fastball was going” in the third and fourth innings.

He allowed nine of the 12 Rockies he faced to reach base in back-to-back rallies before being lifted by Boone. By then the Yankees were trailing, 7-1, turning the rest of the afternoon into a contest of who could survive the 100-degree heat. Large swaths of Yankee Stadium were empty in the later innings; the fans had either decided that the Yankees’ winning streak was indeed over, or else they just needed air-conditioning.

The Yankees unsurprisingly picked up all their runs via the long ball — on home runs by D.J. LeMahieu, Mike Tauchman and Aaron Hicks — but unlike so many other games on this homestand their offense looked just as worn out as the ticket holders. They dressed quickly afterward, preparing for a charter flight to Minneapolis and the beginning of an important road trip. The three games with the Twins will be followed by four on the road against the Boston Red Sox, which will bring the Yankees to the doorstep of the July 31 trading deadline.

Cashman will no doubt work the phones until the final hours, although with each passing day he and the Yankees come closer to a realization about the starting rotation. For better or worse, this is us.