6 clues, hints and questions after Part 2 of Emmerdale's survival week 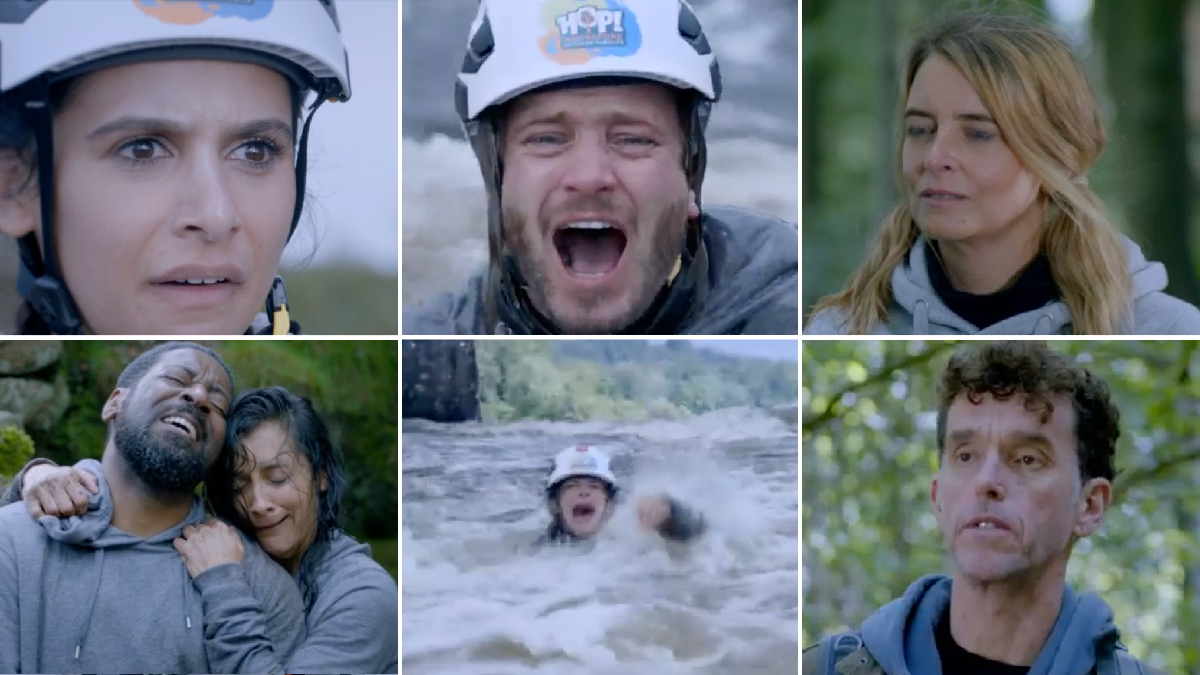 Emmerdale’s second survival outing proved to be as compelling as the first, as several of the soap’s finest found themselves fighting for their lives, battling waves and falling from great heights.

Picking up from where the previous left off, Tuesday’s (October 19) edition of the ITV serial drama saw Victoria Barton (Isabel Hodgins) and David Metcalfe (Matthew Wolfenden) clinging to the remainder of the bridge for dear life.

Tragedy struck, however, as the pair ended up falling into the rapids below, before Vic ultimately descended down a terrifying waterfall!

Manpreet Sharma (Rebecca Sarker) and Charles Anderson (Kevin Mathurin), meanwhile, managed to make it to safety after they were thrown about violently in the water.

So much to digest, right?

We thought so too, hence why we’ve decided to dive back in – if you’ll excuse the pun – to Part 2 of the survival week ahead of Part 3, to take a closer look at the biggest takeaways from the instalment in question.

Who is Meena talking to?

The first edition of survival week kicked off with a chilling flash-forward sequence which featured a voiceover from Meena, describing to the viewer the true scale of the atrocity that ensues during the week in question.

Tuesday’s episode featured a similar sequence, as Meena’s dialogue continued. But it seems as though her voiceover is not just for dramatic effect, but rather it’s coming across as though she is talking to someone.

Perhaps her words are snippets from a police interview that she does after the shocking events of this week?

Either way, it’s likely that each of this week’s episodes will commence in a similar fashion, and if so, who knows what neat little clues – about what transpires – the crazed killer might give away?

‘Terrible things happen in the woods’

After arriving at the campsite to find it empty, Marlon and Paddy wandered around the woods, desperately hoping to locate their teammates.

The jaunt allowed the pals to bond further, as they reflected on their childhoods and how things can get better as one gets older.

But having no idea which direction they’re supposed to be heading in soon became frustrating, and the stillness of the environment around them led to Marlon to comment that ‘terrible things happen in the woods’.

He’s not wrong! Many horror films have been set in the woods, for example. In Emmerdale’s case, it’s known that someone will lose their life this week during the survival challenge, so Marlon has kind of unknowingly foreshadowed what’s to come!

Does Charity feel the same about Mackenzie?

Mackenzie refused to see the funny side when Charity pretended to drown in the pond. His reaction, however, left Charity in shock, which ultimately forced him to explain why he reacted in such a fashion.

Charity was taken aback by Mack’s admission. The question is: does she reciprocate these feelings? If so, will she admit it to both herself and to Mack?

Will Meena tell Andrea about Charles and Manpreet’s moment?

Manpreet and Charles managed to make it to safety, after spending much of the episode in the water. The experience left the pair exhausted and struggling to breathe.

Charles had suffered a blow to the head during the ordeal, and thus Manpreet tended to him. The former lovers shared what was quite clearly a moment, one which was witnessed by manipulative Meena, who was chuffed to see them getting on like a house – or should we say a maze? – on fire.

Meena has spent quite a bit of the last couple of episodes winding up Andrea about Charles’ close connection to Manpreet. But will she relay what she saw to the wedding planner?

Manpreet declared that Charles would live after examining his head wound, much to his relief. But Charles failed to tell her that he’d injured his leg while battling through the unforgiving waters.

The cut looked incredibly deep when viewers got a close-up on it, and the ominous incidental music that played in the background indicated that this is very much something we should be worried about.

Will Charles make it out the survival challenge alive? Or will this open wound prove to be the end of him?

Will Victoria die after her waterfall plunge?

Victoria and David fell from the bridge into the water within minutes of the opening credits, and they remained in the water for the rest of instalment.

The two desperately tried to cling on to one another, but the strength of the current kept separating them.

They were given a momentary reprieve, however, gripping tightly onto a nearby rock. But the strength of the water tore them apart once more, forcing David to watch as a terrified Victoria plummeted down a waterfall!

Will Victoria live to see another day? Or has her fate been sealed by the dangerous waters?