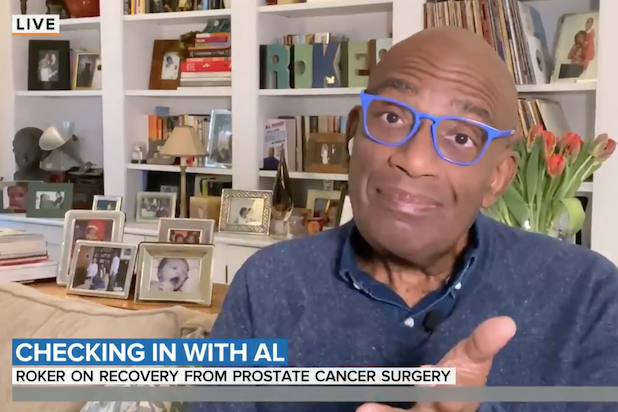 Al Roker says he expects to return to the “Today” show next Monday following his surgery for prostate cancer last week, which means he’ll also be back on the air in time to handle his annual duties at the Macy’s Thanksgiving Day Parade for NBC.

Roker gave an update from home in an interview with his “Today” colleagues Savannah Guthrie and Hoda Kotb Tuesday, who were in the studio. Roker’s physician, Dr. Vincent Laudone of Memorial Sloan Kettering Cancer Center, also appeared.

Laudone said that, based on lab results, it appears Roker’s cancer was isolated to his prostate and removed, giving him “an excellent prognosis. However, the doctor noted that America’s weatherman will need regular cancer screenings for the rest of his life.

“It was this great relief,” Roker told Guthrie and Kotb of hearing that news for the first time with his wife, ABC journalist Deborah Roberts, and their son, Nick. “We’re not out of the woods… but for a first start, this is terrific news.”

Roker told his co-workers he feels “good,” though he is dealing with a bit of swelling, which made him compare himself to “the Michelin Man.”

“Can’t wait to see all of you back in person, hope on next Monday,” Roker told his colleagues. “And then, of course, we’ve got the big Thanksgiving Day parade.”

Roker announced his cancer diagnosis on air Nov. 6. Given the aggressive nature of his cancer, he announced he would be taking time off immediately and hoped to be back in two weeks.

“One in nine men are going to be diagnosed with prostate cancer in their lifetime,” he told his colleagues and viewers at the time. “But for African-American men, that number is one in seven and is more deadly. If you detect it early, it is a very treatable disease.”