Home » TV & Movies » Alex Jones’ appearance puzzles The One Show fans as outfit causes a stir: ‘In her pyjamas’

Alex Jones’ appearance puzzles The One Show fans as outfit causes a stir: ‘In her pyjamas’

Nigel Havers, Liam Gallagher and Elaine Page joined Alex Jones and Amol Rajan on Monday’s The One Show as the BBC magazine show kicked off the week with a bang. However, with the FA Cup third round draw taking place at 7pm, fans had to wait an extra half an hour until they got to see Alex and Amol on-screen. And despite the star-studded line-up and detailed interviews, it was Alex’s outfit which caught the eye, with viewers claiming the presenter had turned up in her “pyjamas”.

As soon as the duo kicked off tonight’s show in its slightly later time slot, several The One Show viewers made their thoughts known on Twitter.

“Alex got her jim jams on again I see #theoneshow,” weighed in a second.

“Is Alex wearing her pyjamas?  #theoneshow,” queried a third viewer, with a fourth echoing: “#TheOneShow is Alex wearing pyjammas???” (Sic) 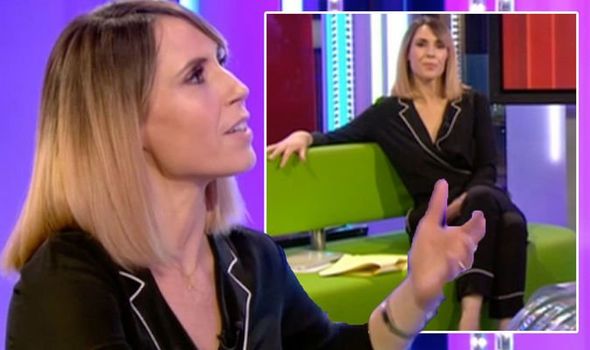