Home » ‘Amend’: Netflix Documentary Series Is an Invitation to Participate in American History

‘Amend’: Netflix Documentary Series Is an Invitation to Participate in American History

The subtitle for “Amend,” the new Netflix documentary series, is “The Fight for American History.” It’s an apt description in many ways, both in the evolution of the U.S. Constitution that the six-part season describes — and in how those advances are understood in the present day.

Hosted by Will Smith, “Amend” presents a concise history of the Constitution’s 14th Amendment. Ratified in 1868, its first section spans just 80 words, but contains provisions for due process and equal protection that have become an engine for change across any number of areas of American life. To help make an overview of those shifts both powerful and accessible to the wide variety of potential Netflix viewers, figuring out how exactly to approach this expansive timeline was one of the project’s core challenges.

“Let’s say you’re a high school freshman and you’re watching this. We wanted you to be able to follow us for the whole journey, giving people permission to not know who we were talking about. You may have heard of the 14th Amendment, but you might not know the whole history of it? That’s OK. You’re invited,” series writer Sasha Stewart said. “Will and Larry [Wilmore] and our producers, Candace [Rodney] and Jamal [M. Watson] and I talked about ‘Who is our audience? What does the audience know? And what does their audience need to know?’ We really wanted to make this accessible, so we didn’t want to make really broad assumptions.”

Having previously worked with Wilmore on “The Nightly Show,” Stewart had experience in helping to put a slightly different lens on different periods of American history. Though different in scope and specificity, the six episodes of “Amend” each follow a thematic overview. Moving from the lead-up to the Civil War up through the civil rights fights of the 1960s to the present day, some of those chapters follow a broad, forward-moving direction. But to capture the true impact of different points along the 14th Amendment timeline, parts of that overview had to tackle different time periods at once.

“Episode 2 was a really big challenge, because we cover a lot of history. We go from Reconstruction all the way through the 1930s. We realized that trying to tackle that strictly chronologically, almost the way we do in Episode 1, you kind of lose the thematic resonance of the fact that the 14th Amendment is getting ripped apart,” Stewart said. “And so we thought, ‘If thematically this is about the 14th Amendment’s death, what are the ways in which it dies? Who was attacking it, and who was trying to save it?’ It’s in the courts, it’s in the streets. Most lastingly, it’s in our own hearts and minds. That ended up helping us with Episodes 4 and 6 as well, which also don’t really adhere to a strict chronology.” 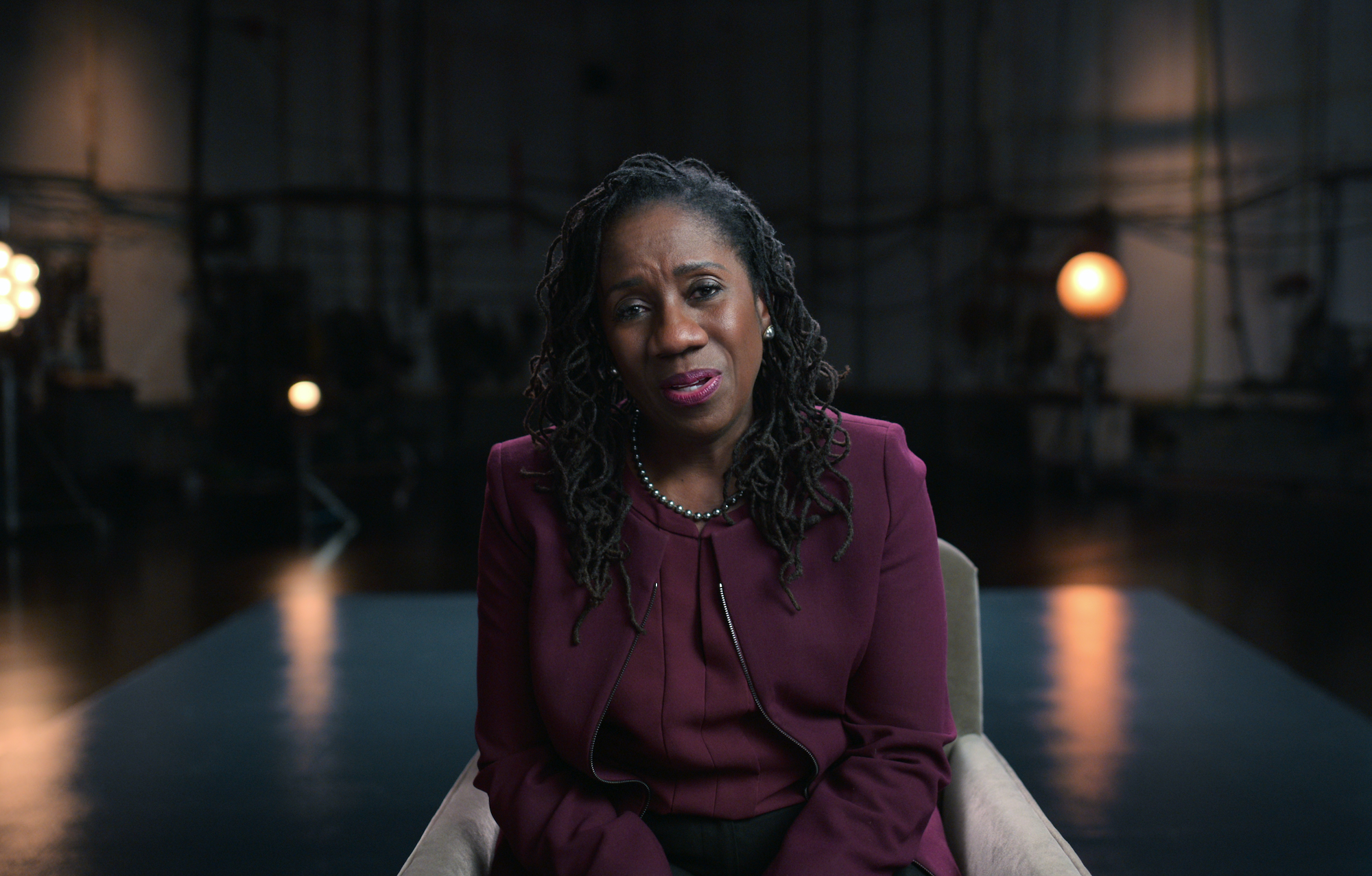 The process of making “Amend” involved drawing on the participation of historians and activists as voices for some of the underdiscussed segments of America’s past. Part of the success of the final product came from taking cues from those interviews and emphasizing historical figures who weren’t in the original plan.

“We had an idea of what the series would be, but it really came to life after we did those interviews. I think it was in our interview with Sherrilyn Ifill, she mentioned Pauli Murray. We got Melissa Murray and other experts to come in and give us a fuller picture of her. And suddenly, Pauli Murray is the hero of Episode 4! A similar thing happened with Ida B. Wells and Episode 2,” Stewart said. “As a writer, I couldn’t have been more thrilled to be able to listen to these amazing interviews with these incredible people, essentially getting a free graduate history lesson, and then using those bits and pieces to expand into new narrative ideas.”

Maybe the most visually striking element of the series is the ongoing collection of recitations and reenactments that help put the words of past speeches and writings and affirmations in a different context. A lengthy list of performers including Sterling K. Brown, Pedro Pascal, Randall Park, Samira Wiley, and Yara Shahidi give voice to the words of decades and centuries past that are by turns painful and inspiring. Given that these people — Presidents, journalists, abolitionists, and more — have volumes of oral and written records to their names, finding a few ideal sentences to exemplify each was an absorbing task.

“We had a great research team that helped with that. And having that interplay between the quotes and our historians and activists talking was also a huge help. To say that Roger B. Taney, the worst Supreme Court justice ever, said this and then Martha Jones saying that his rhetoric is ‘bone-chilling.’ To then be able to give that to our performer and say, ‘You’re giving a bone-chilling reading.’ That was so helpful,” Stewart said. “David Blight talks about Frederick Douglass’ ‘What to the Slave Is the Fourth of July?’ speech. We ended up picking the quotes for Mahershala Ali based off of how he talked about it. The way he talks about how it has this calm opening, how Douglass is putting his audience at ease. Then he like comes thundering in and then quiet again, and at the end he gives you that light of hope. That really helped guide us: What are the pieces that are the most forceful for that middle section and where is that hope at the end?”

Shaking hands between generations, letting daguerrotypes feel as urgent as modern-day news footage, meant focusing on the ways that viewers could more easily imagine the atmosphere of years past. Douglass’ speech, in addition to providing an anchor for the series’ opening episode, also became an example of what the show could do in partnership with those minimalist-staged reenactments.

“The note from Will, that was probably my favorite episode for the whole series, was, ‘I want to see it in people’s eyes. Get me in people’s eyes,’” Stewart said. “If you’re thinking about that sequence, we show Mahershala’s incredible performance and then we also show this archival of how people might have been reacting to the speech. It’s not just about him giving the speech. It’s about how these people are responding. You see how difficult it must have been to be talking to this huge, entirely white audience at a time when he was in grave danger for speaking what he was saying.” 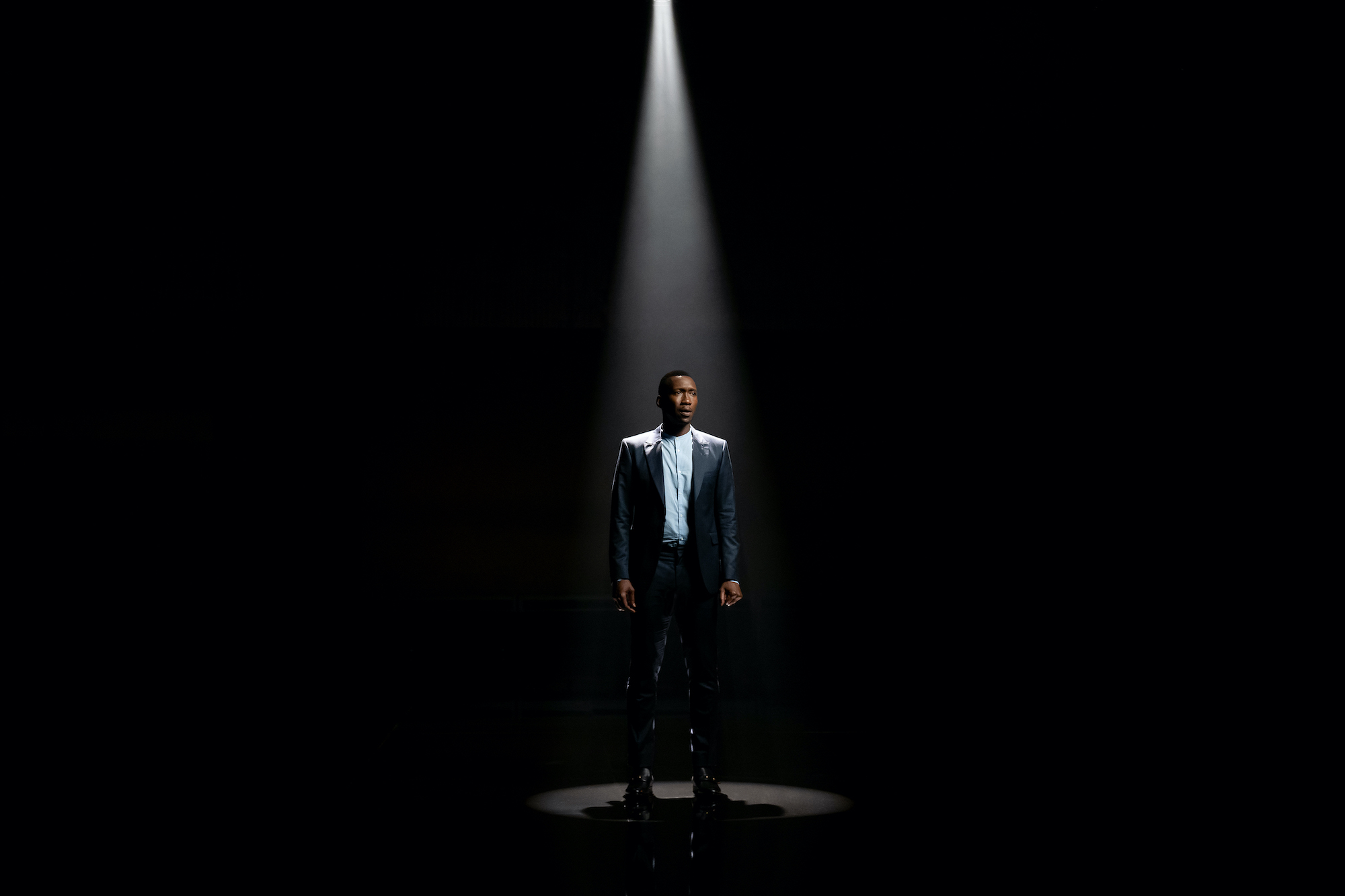 Mahershala Ali on the set of “Amend”

Another way that “Amend” takes cues from language itself comes in the series’ animated sequences, produced by the LA-based MakeMake. Each episode takes the single-word title of an episode and fashions an evolving scene where that word stretches high above the animated landscape. The production team referred to these words — “LOVE” or “RESISTANCE” or “WAIT” drawn in impossibly tall letters — as the “monoliths.”

“Picking each word for each episode was incredibly challenging. But having those words as our North Stars was so helpful in building the story and the narrative,” Stewart said. “Going back and forth with the editors and story producers, figuring out what is actually happening to those monoliths as they’re going through, it was just so rewarding. They really help anchor you as a viewer throughout the episodes. We’re always coming back to not just the 14th Amendment, but what the 14th Amendment means to actual human beings as they’re living their lives.”

Even when they’re not addressed directly, intersectionality and allyship become two of the main threads of the series. In documenting the efforts to make the Constitution work for all who reside in America, the goal was to make “Amend” a series that could reflect the full spectrum of participation.

“We trust that the audience can see themselves throughout the series, no matter who they are. It was more important to us that if you are a part of marginalized group that you saw yourself. I think you see that in the casting of the performances as well. We really wanted everybody to be to feel seen,” Stewart said. “We are being honest about white America’s role in history, and especially in American history. But there are also people like John Bingham, who we elevate, because he is a co-conspirator in trying to make real equality happen. That was definitely on our minds, making sure that if you’re a guy watching Episode 4, that you feel like that you feel like you’re not being shut out. If you’re a straight cis person, and watching Episode 5, that you also feel that you have a vested interest in watching this, and as a white person watching Episodes 1 through 3 that you feel really engaged as well. Lincoln doesn’t exist in a vacuum. He exists because Frederick Douglass pushes him.”

That widespread work is not limited to a single amendment. In the way that “Amend” argues that the Reconstruction amendments to the Constitution represented a new birth for the American project, there are other amendments in the years since that capture the wide, sweeping changes as to how the country sees itself. One thing that connects them all is that their protections persist when a wide coalition works to ensure that they do.

“Something else we were trying to convey is that people were pressing for change, always. Even when it was the darkest, most horrible moments of history, there were always people fighting to make things better. I think a lot of people feel like the Civil War happened and then it was silence and then it was the Civil Rights Movement. And that’s not it at all,” Stewart said. “Showing that even when all of the anti-Asian discrimination was happening in the 1880s and ’90s, that there were Chinese Americans fighting for their own rights and going to court, it shows you that there have always been people who have been fighting. I think that helps you, as an audience member, realize that you can make change happen, too. You can be a part of this struggle for equality.”

“Amend: The Fight for America” is now available to stream on Netflix.

Amend, Amend: The Fight for Am
Celebrities