'Animaniacs' Revival Misses the Zany Magic of the Original

Tom Ruegger wanted no part of a Tiny Toon Adventures spin-off. The animation vet had created the Tiny Toons — kids inspired by the original Looney Tunes characters, now learning comedy from Bugs Bunny and friends — but was already burnt out on them when he was asked if he could build a new show around Plucky Duck or one of Babs and Buster Bunny’s other classmates. “We’ve had it up to here with Tiny Toons,” Ruegger says he replied. “We’re about cooked on them. Let’s do some new stuff.”

That “new stuff” became Animaniacs, which didn’t feature a single vintage Looney Tunes regular, but was gloriously true to the anarchic spirit of “Duck Amuck” and “What’s Opera, Doc?” Following boss Steven Spielberg’s mandate for the series to offer “a marquee name,” Ruegger took inspiration from the name of their studio itself, and dreamed up the Warner brothers, a pair of vaguely puppy-ish creatures named Yakko and Wakko, plus their sister Dot. The Warners were figures of pure chaos in the vein of the Marx Brothers, with Yakko the verbally relentless Groucho figure, Wakko as a prop-wielding Harpo (who happened to talk like Ringo Starr), and Dot as a girl who had learned to weaponize her own cuteness. They wreaked havoc throughout time and space, running afoul of everyone from Michaelangelo to Beethoven and Albert Einstein. No matter where they went, Ruegger says, the ethos was the same: “Yakko, Wakko, and Dot are telling adults who are jerks that they shouldn’t be jerks.”

To the Warners, Ruegger and fellow Tiny Toons vets like Sherri Stoner, Peter Hastings, and Deanna Oliver added a host of characters who were similarly strange and appealing: Pinky and the Brain, a mismatched pair of lab mice who spent every night trying and failing to take over the world; cranky old cartoon star Slappy Squirrel and her adorable young nephew Skippy; the Goodfeathers, a trio of combative pigeons modeled on the three male leads of Goodfellas; and many more. Beginning in 1993, across five seasons on Fox and then the WB, Animaniacs was a staple in the lives of many millennial kids and teens, and featured the sort of double-edged humor that made it a delight for people well outside the demo. (I watched it religiously with my friends in our college dorm.) Songs like “Yakko’s World” (where Yakko lists all the nations of the world at the time, to the tune of “The Mexican Hat Dance”) and lines like “Pinky, are you pondering what I’m pondering?” (always greeted with a non sequitur like, “I think so, Brain, but where are we going to find a duck and a hose at this hour?”) took on lives of their own beyond any of the plots Ruegger and his collaborators dreamed up for the Warners and their weird friends.

The show’s original run ended in 1998. After a direct-to-video 1999 movie, Wakko’s Wish, the Warners got figuratively locked back up in the studio water tower, just like their origin story says they were in the 1930s. Starting on November 20th, though, the Warners will again escape, and it’ll be time for a new Animaniacs on Hulu. After all this time, the Warners are still animan-y and totally insane-y.

Animaniacs as a whole, though? Not quite the same-y.

The new version smartly brings back original voice actors Rob Paulsen, Jess Harnell, and Tress MacNeille as Yakko, Wakko, and Dot (with Paulsen doing double duty as Pinky, opposite the return of Maurice LaMarche as the Orson Welles-esque Brain), plus a few members of the old show’s crew. Nearly all of the other characters are gone, though, from Slappy and Skippy to the Warners’ regular nemesis, exasperated studio psychiatrist Dr. Otto Scratchensniff. Also missing: Ruegger and most of the original writers, who weren’t asked back.

“They had decided to make the show, and by the time I even heard about it, they had a showrunner and a staff,” Ruegger says. When his agent reached out to the new creative team suggesting they involve Ruegger in the process, they declined, Ruegger says. “He said, ‘Well, at least bring him in to meet them.’ So I went in there with my agent and said, ‘I’d love to be involved in some meaningful way,’ and they said, ‘OK. But we’ve got it under control.’”

(A source close to the production disputes several details of Ruegger’s account, insisting that Warner Bros. went out of its way to keep Ruegger’s team informed about the revival and the fact that he would not be in charge of it.)

The new showrunner is Family Guy writer/producer Wellesley Wild. He and his team do a pretty good job on the Pinky and the Brain shorts, but they largely miss the mark with the Warners.

In the original show (also available to stream on Hulu), the Warners were superhumanly annoying, but in service of a greater good. As Ruegger says of their old stories, “Almost all of them are about going up against assholes, authority figures, and puncturing the balloon of pomposity, hoisting them by their own petard.” The revival has them mostly reckoning with all the ways the world has changed since we last saw them. Where their powers of exasperation once made them unstoppable, now they’re the ones who seem impotent and irritated by the people and culture around them. Thanks to Paulsen, Harnell, and MacNeille, the Warners sound like they should, but the magic is otherwise missing.

Wild and the new writers are clearly aware of what made the old show special, but they’re too wrapped up in bringing the characters into contemporary America(*) to do those things. One story has the studio overrun with bunnies, in a clumsy gun-control allegory that prevents Yakko from getting musical; he laments, “Now the children will never hear my educational song about Italian mannerist portrait artists!” In one episode, the Warners transform into anime fighters; in another, they travel to Russia to try to shut down an unauthorized (and extremely sexist) imitation show whose Dot is played by a large bearded man in a pink skirt.

(*) There’s also the matter of animation’s long lead time making many of the references feel dated. At one point while discussing politics, Yakko says, “At least, we think there’s still a President Trump. The writers are writing this in 2018.” 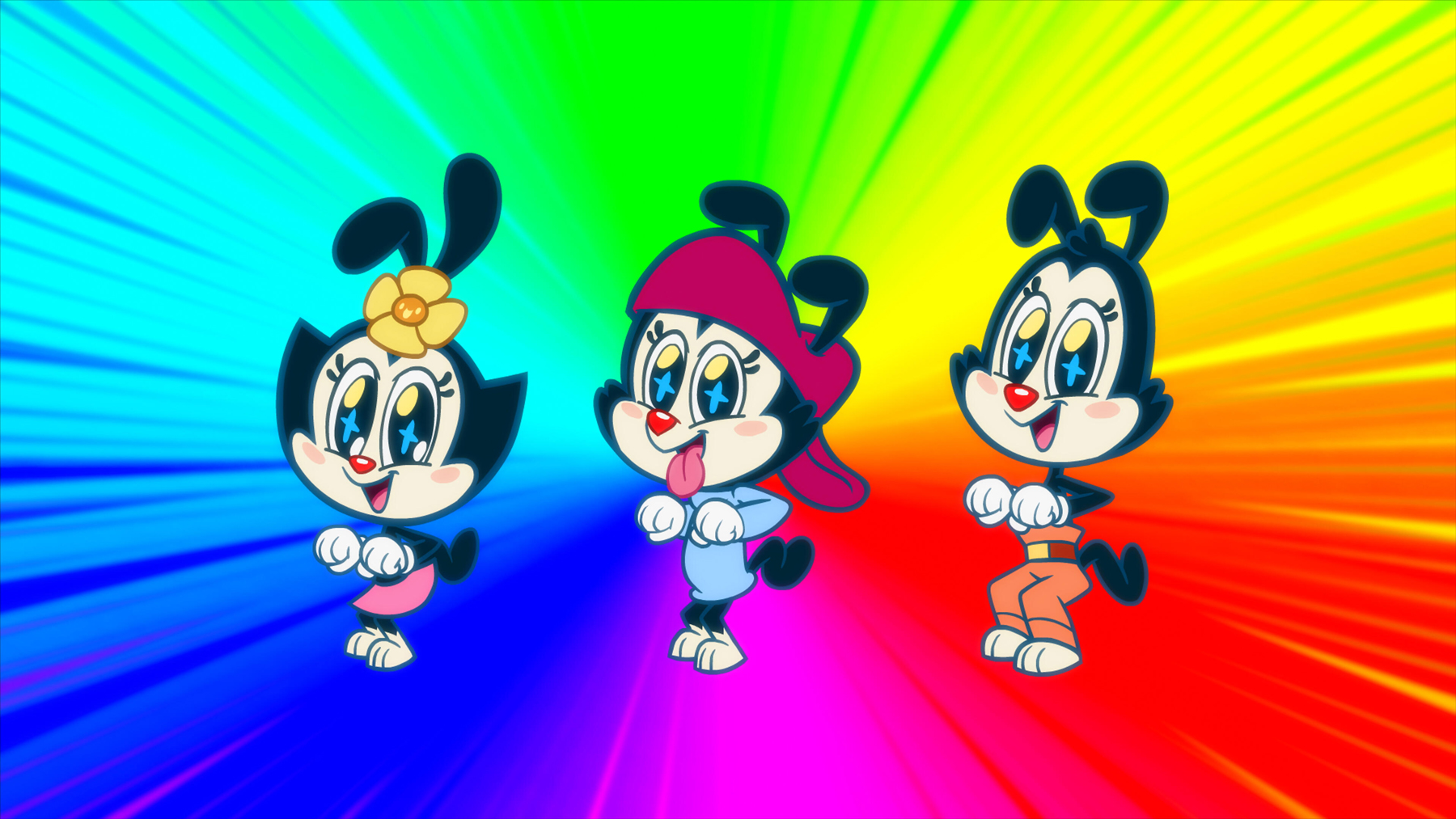 Dot, Wakko, and Yakko in the ‘Animaniacs’ revival on Hulu.

Ruegger noted that the original Animaniacs was just contemporary enough to prove more appealing to kids than the Looney Tunes shorts that shared their sensibility. But nods to modern life weren’t prevalent, outside of the line in the theme song about Bill Clinton playing the sax, plus Goodfellas only being a few years old at the time the Goodfeathers were introduced. (And even those shorts were often an excuse to get retro, like a West Side Story parody about dueling bird gangs.) The original writing staff didn’t worry much about whether their target audience would get old references, and just did whatever made their colleagues laugh. “King Yakko,” maybe the defining Animaniacs short, is essentially Duck Soup remade with the Warners. “Hearts of Twilight,” where the Warners journey deep into the heart of the studio lot to prevent Jerry Lewis from finishing a terrible movie, is simultaneously a parody of Apocalypse Now and a riff on Lewis’ infamous, uncompleted concentration camp film The Day the Clown Cried. Not exactly kids’ stuff, but the jokes were all that mattered.

“We had no one breathing down our necks about that,” says Ruegger, who remembers Spielberg encouraging them to follow their old-fashioned passions. In an episode of the Pinky and the Brain spin-off, “we did a take on [the 1949 film noir] The Third Man. Steven commented, ‘I’ll bet this is the only current cartoon about The Third Man.’”

A lot of the original show’s adult-oriented humor was by accident, and not discovered until the actors were in the recording studio, where Paulsen would be asked to blow the audience a kiss and say, “G’night, everybody!” after an inadvertent double-entendre came up. In a mystery parody, Yakko orders Dot to “dust for prints.” Instead, she reappears holding Prince in her arms. Paulsen performed the follow-up line, explaining that he meant fingerprints; MacNeille heard “finger Prince” and quipped, “I don’t think so.” The improvisation stayed in the final version, with studio execs either not noticing or not minding by that point.

That said, Yakko and Wakko’s unbridled lust for Scratchensniff’s voluptuous blonde assistant, a.k.a. Hello Nurse, was intentional from the start, and one of the areas where Ruegger would have changed course from the original had he been in charge of a revival. “I’d put Hello Nurse as the studio boss,” he says. “We’d insinuated that she was particularly bright in several cartoons.” He also would have made Skippy Squirrel an adult, still living at home, with Aunt Slappy desperate for him to move out, and also provided glimpses of what Pinky, the Brain, and the Warners had been up to in between: “Yakko, Wakko, and Dot have been controlling/fixing the internet from inside the water tower.”

Instead, he’s on the outside looking in, disappointed with the revival on levels both micro (he doesn’t think Animaniacs should be used as the name if the show doesn’t feature the larger ensemble, since “It’s an umbrella title for all the characters”) and macro.

“I find it morally, ethically, and professionally wrong,” he says, laughing ruefully. “That’s pretty much it. Whether it’s legally wrong, I don’t know. They own the show, Warner Bros. and Amblin own Tiny Toons, Animaniacs, Freakazoid, Pinky and the Brain. I think they feel they can do whatever the heck they want with it. If we, the creators of the show, had passed away, I could completely understand what they did. But we’re not. We’re all alive, thriving, active, and I really don’t get it that they wouldn’t want the people that know the show better than anyone to be involved. It’s odd.”

Animaniacs sprang to life all those years ago because Ruegger didn’t want to be part of a spin-off. The reboot, however, he very much wanted in on. It’s unfortunate for everyone involved, particularly the audience, that he wasn’t given that chance. But at least Hulu still has all those old episodes ready to binge while you enjoy some chicken chow mein-y.