Home » TV & Movies » Between Being the Ricardos and Spider-Man, J.K. Simmons Continues to Win the Perfect Casting Game

Between Being the Ricardos and Spider-Man, J.K. Simmons Continues to Win the Perfect Casting Game

Though it would take three decades for “Being the Ricardos” writer-director Aaron Sorkin to cast J.K. Simmons in something Sorkin wrote, the filmmaker well remembers when the urge first came to him.

“He was an understudy in my first play ‘A Few Good Men,’ back in 1990,” Sorkin told IndieWire of the now widely esteemed actor, “And I got a call from the stage manager just to alert me that he was going on at a Wednesday matinee, so I ran to the theater. I wanted to catch his performance, understudying the role that Jack Nicholson played in the movie. He just blew the roof off the theater, a full house on Broadway went crazy. And I knew after his first scene, ‘This guy is a star. Keep your eye on him, keep yourself handcuffed to him.’”

Sorkin’s debut stage hit with its indelible “You can’t handle the truth” line, legendarily composed in part while the budding playwright was still employed as bartender in another Broadway house, would run nearly 500 performances. Simmons, meanwhile, would continue solid repertory work and also be onscreen with the likes of his recurring appearances on the mandatory generational touchstone series “Law and Order.”

You could look at his voluminous resume’ since and call him an actor’s actor, most memorably for his Oscar win as Best Supporting Actor as the martinet instructor of “Whiplash.” And it’s no surprise to find him with three notable films emerging this month, though much of the focus is on his warmly reviewed turn for Sorkin as William Frawley, the Fred Mertz character in “I Love Lucy,” as part of a central quartet that includes Nicole Kidman and Javier Bardem as the titular couple and Nina Arianda (who recently tangled with Simmons-as-outright-villain George Zax in Season 4 of the Amazon Prime Video series “Goliath”), scrapping with him in her role as Vivian Vance’s Ether Mertz.

The performance as the almost covertly kind-hearted Crawley is in some ways career-summarizing for Simmons. In one of his sporadically arriving but inevitably telling scenes, his Frawley tells Kidman’s combative Lucy that he’s talking her down her based on the hard lessons of “thirty years of vaudeville.” Simmons has been variously singled out for reviewers’ praise as “the standout” who “has a field day,” showing up “rumpled and nearly perfect,” as well as “wonderful,” ”effortlessly entertaining,” “spectacularly funny,” and, in inhabiting Frawley, emerging as “petty and grumpy and yet somehow wise.” 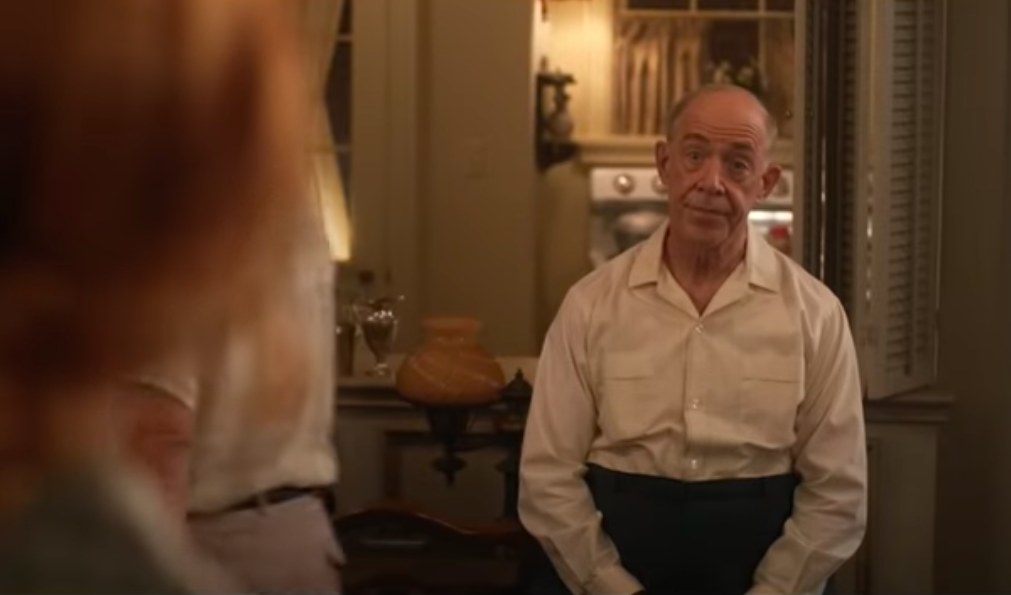 Never quite hidden amidst other highly touted performances, Simmons, per his habit, walks away with the trophy for flawlessness. He quietly commands our eye with authenticity, and if he makes the scenery disappear, it’s never by eating it. Simmons assesses the process with typical self-deprecation: “Listen, with the number of parallels between William Frawley and myself there was not much of a stretch for me to begin to inhabit this guy,” he told IndieWire. “Our backgrounds are startlingly similar, except that vaudeville is not really a thing. But my version of vaudeville was regional theater for 20 years and then Broadway. Finally, somebody pointed a camera at me when I was in my forties.”

As Simmons appears on screen this month in ”Ricardos,” as well as reprising his much-praised socko take as growling editor J. Jonah Jameson in “Spider-Man: No Way Home” (“The same blowhard, with less hair,” Simmons confides), with several other jobs he’s out in the can following quickly behind, Sorkin has no doubt of his versatility. “J.K. is the kind of actor you want to cast in everything,” he said. “And the character will become right if even if that character is described in the script as being completely different than J.K. When J.K. inhabits the character, it becomes perfect casting.”

The confidence is well-placed. During Simmons’ initial rise into indispensability for such directors as Sam Raimi, Jason Reitman (who has described him as a “muse”) and Damien Chazelle, he showed an almost dizzying range. For Raimi, he knocked off two quick if memorable performances in “The Gift” (a psychological thriller he feels is underrated) and “For the Love of the Game,” and then became a Spidey series fixture. In the latter, he played a hard-bitten baseball manager with Kevin Costner as his troubled charge. He modeled his character on iconic Tigers skipper Jim Leyland, embodying the not-always-salty manager’s credo “I love the players — I always will.”

In “National Champions,” Simmons’ top-dog NCAA coach is ensnared between that kind of pained empathy and a lust for “glory” which leads to a bravura speech (filmed with a hastily-recruited college-age audience) that could have derailed in a lesser actor’s hands. “As an actor there are always things that, somewhere in your psyche, you’re not sure you can pull it off,” he said. 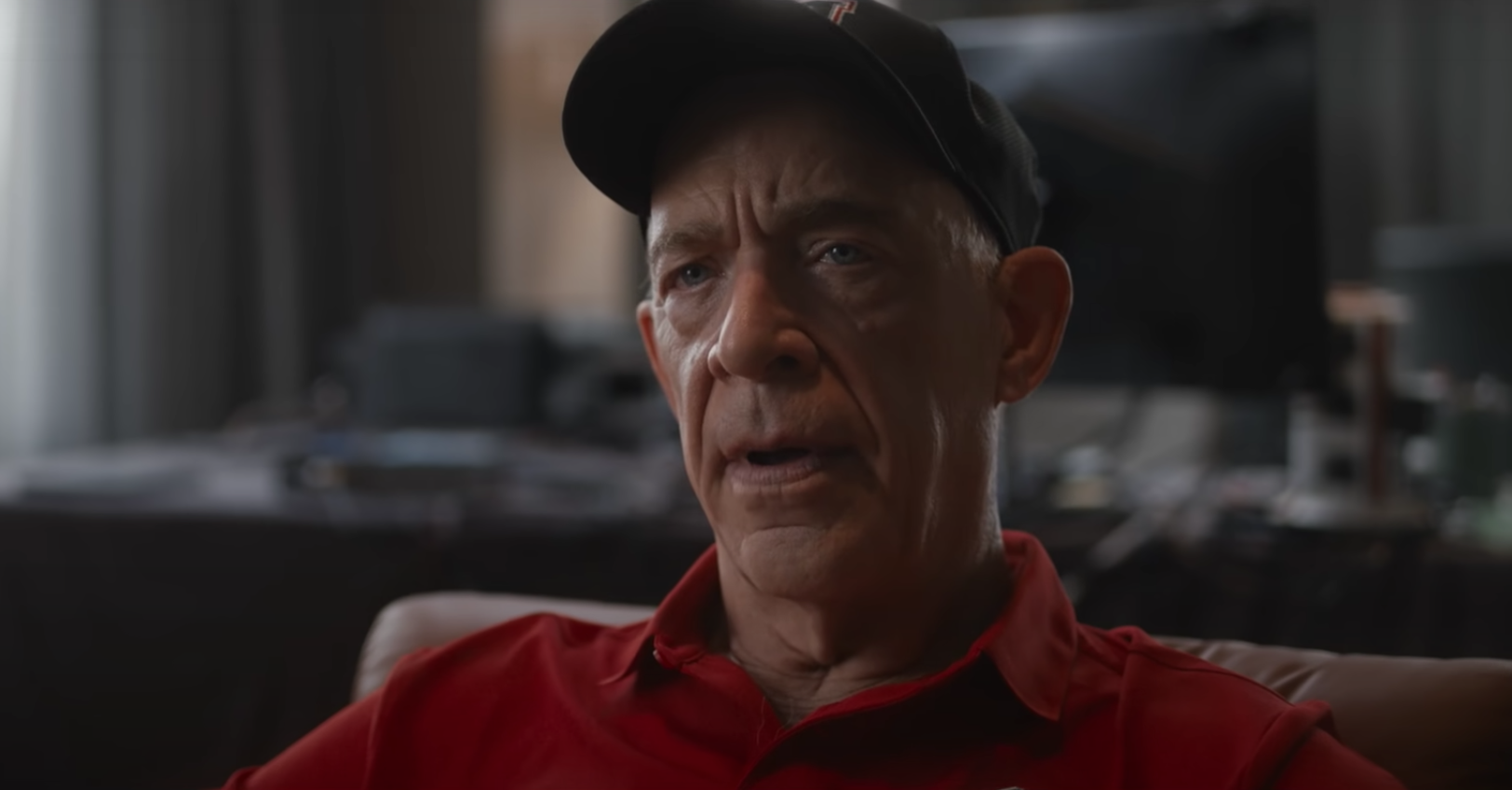 Prep time was minimal. ”I finished ‘Ricardos,’ had a weekend off and then immediately went into ‘National Champions,’ which is such a different style of shooting — having come from where every syllable is rhythmically there for a reason to a script, to where you had much more leeway to play with it,” the actor explained.

Simmons can score in any scenario — in an Oscar-winning script for Reitman’s “Juno,” perhaps not line gets a bigger laugh than his perfunctory “Heating and air conditioning” — but in this case he had to deliver as both anti-hero, the voice of the establishment sports machine, and hero, the man who truly loves the players.

“There were wonderful words on the page, but we were free to depart from that,” Simmons said. “And certainly in that speech I was getting across all the ideas that were in the script, but every take was significantly different, partly to elicit a different response from the 60 background actors — and a few principal actors — that I was playing the speech for. There was a lot of electricity in that room, a lot of love as well as conflicted emotion flying back and forth between between those kids and me.”

For all the discipline in Simmons’ line readings for a committed wordsmith like Sorkin — “Honestly, I cannot recall having to give J.K. an adjustment,” Sorkin said — he is also sought after for his willingness to go off the high dive if the director offers him the space, as Raimi did for Jameson’s somehow good-natured explosiveness.

“Immediately after reading the script and talking to Sam, I had a solid handle on how I wanted to portray that guy,” Simmons said. “It seemed like J.J.J. should jump off the pages of the comic book directly and unfiltered — maybe more so than a lot of the other characters more grounded in in a contemporary reality. He always struck me as a bit of a throwback, and the new version is the same guy abusing his position as, now, the head of a multimedia conglomerate. Instead of screaming at his employees in his office now he’s screaming at everybody from the Jumbotron.”

Simmons’ inescapable commercial forays as the avuncular oracle of a major insurance company’s accident adjustments (“…because we’ve seen a thing or two”) and the voice of the yellow M&M candy have undermined his acting credibility not a whit, and he’s the pro’s pro. It says much that he did three takes of a key pratfall off a chair in “Ricardos,” even though it was the second one that tweaked his back.

Simmons finds a through-line in his body of work from Shakespeare in repertory to Damon Runyon’s “Guys and Dolls” (in which he shined on Broadway) to Sorkin’s writing. “In all three of those cases every syllable is very precise, and is there for a reason, and there’s a rhythm and an intelligence to it,” he said. “But I think something that people undervalue sometimes in Aaron’s work is there’s such great heart to it, intertwined with the rhythm and the intelligence.” 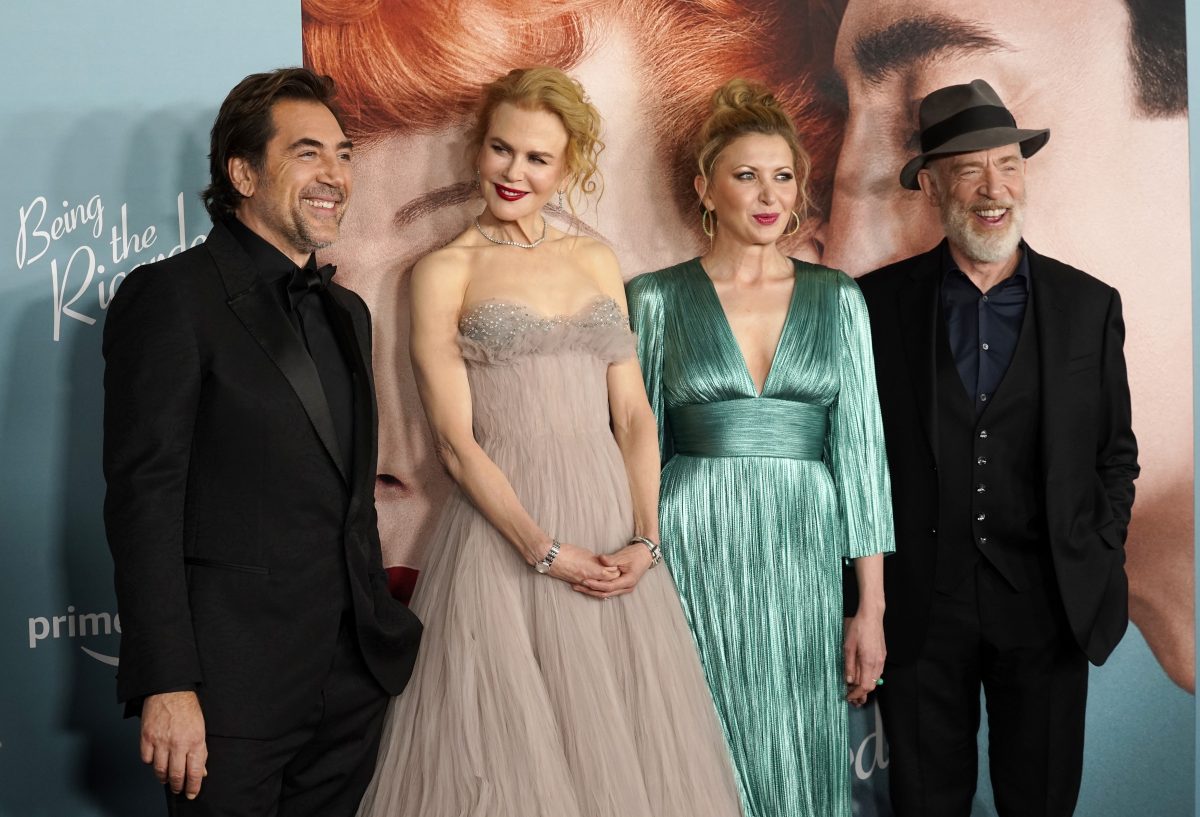 Javier Bardem, Nicole Kidman, Nina Arianda, and J.K. Simmons, cast members in “Being the Ricardos,” pose together at the premiere of the film

Heart is a component that’s long been obvious in the actor’s work, and his touching remarks on the centrality of family from the Oscar stage will long be remembered in Hollywood and beyond. Now that a profusion of scripts keep piling up on his doorstep, he admits to enjoying the latitude he has to keep things close to home, especially when his filmmaker wife Michelle Schumacher (her “In the Woods” is due in 2022) and their two adult offspring are thoroughly in the mix.

“I have been in a position to be able to pick and choose for quite a while now,” he said. “It’s just fortunately coincided with the times when our kids were born, and family life was the most important thing. Our whole family is involved. Her brother is the producer, our daughter is in the film, our son is currently working on scoring the film. Now it’s the ideal combination of work time blended with family time — it doesn’t get much better than that.”

An Amazon Studios film, “Being the Ricardos” is in limited theaters now before being available to stream on Prime Video starting on Tuesday, December 21.