'Bling Empire': All of the Show's Asian Customs Explained 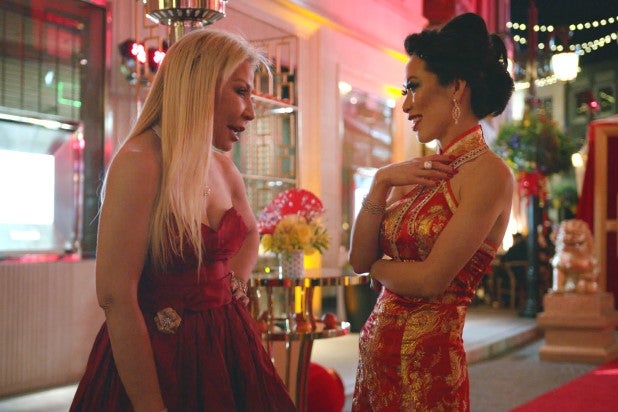 “It was a collaborative effort where we shared a lot [of knowledge] with the crew,” producer and cast member Kelly Mi Li told TheWrap of incorporating the cultural elements into the show. “We had a good amount of Asian Americans on the crew working, which helped a lot.”

Major Asian holidays and cultural events, including Chinese New Year and a 100-Day party, serve as backdrops for the show’s most dramatic moments.

TheWrap breaks down all of the Asian customs from “Bling Empire” below (warning, major spoilers ahead):

The docusoap kicks off with Christine and Gabriel Chiu’s lavish New Year’s Party in Beverly Hills. New Year’s Day is the most important day in the lunar calendar, symbolizing new beginnings. In the season premiere, which was filmed in 2019, the cast gathers to ring in the Year of the Pig (The Year of the Ox kicks off on Feb. 12, 2021.)

“The white new year, what do you get to celebrate?” castmember Kane Lim rhetorically asks in his on-screen confessional. “You have a new goal in life. You want to lose weight. You wake up with a hangover. [For] Chinese New Year, you wake up with money! You collect money in a red envelope. It’s such a good holiday.”

Families exchange red envelopes (hongbao) filled with money as gifts. The practice is so common, banks in cities with large Chinese populations (i.e. San Francisco, Singapore, Sydney) will print red envelopes each lunar new year for their clients to give away.

The color red, which is seen throughout the series and worn by many castmembers, symbolizes luck. Lion dancers also recur throughout to bring luck and ward away evil spirits.

Following the Chinese New Year celebration, Anna Shay invites the Chius to a formal dinner at her Beverly Hills residence. As a party favor, they are given a Baccarat butterfly paperweight. In Japanese culture (Shay is of Japanese-Russian heritage), butterflies symbolize joy, with two butterflies symbolizing marital happiness. Though it’s never outright explained in the series, the one butterfly may hint at the Chiu’s rift over having another baby. And, as in many other cultures, butterflies are a symbol of fragile beauty, perhaps another commentary on the Chius, who operate a successful plastic surgery business.

When Kane and his friend Kevin Kreider visit expectant-mom Cherie Chan at home, they come across a pot of pork knuckles and ginger stew bubbling away on the stove. Cherie explains that she’s been preparing it for a month and just added pigs feet and eggs.

“Why is it black?” Kane asks, lifting the lid and immediately retching from the overwhelming smell.

“It’s because of the vinegar,” Cherie explains.

Indeed, black pork knuckle and ginger stew is eaten by many moms post-partum; the bones dissolve over the long cooking process to provide collagen, the meat and eggs add protein and calcium depleted during childbirth, and the vinegar and ginger are cleansing for the body and digestion.

“The funny thing is, I grew up eating the pig’s feet vinegar because around wintertime,” Cherie explained to TheWrap, “it’s a warm food for your body. You don’t have to turn on the heat because there’s so much ginger in there.”

Shrine to the dead (Episode 2)

Later in the episode, Cherie, Kane and Kevin gather at a home altar dedicated to Cherie’s mother Cindy, who passed away from pancreatic cancer. Such shrines are common in Chinese homes; they include a photo of the departed loved one and offerings like fruit and incense. The trio lights candles for Cindy, while Kane and Kevin begin a Buddhist chant to help send her soul to the afterlife.

“In Buddhism, the soul stays in the body after you’re dead. There’s a period of time where your consciousness doesn’t know where they are and by chanting, it helps guide a person to a better place,” Kane explains. 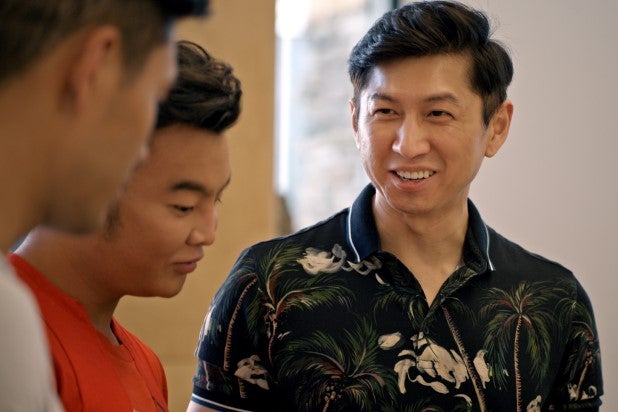 Kane, Kevin and Cherie’s boyfriend Jessey visit a Chinese apothecary, Wing Hop Fun, to source more ingredients for post-partum soup. The apothecary contains many herbs and delicacies, including dried sea cucumbers, which can cost hundreds of dollars per pound.

“$239 for this? Man, I’d be poor shopping here,” Kevin says in disbelief. But the true sticker shock hits when he sees the items in the special locked case, which includes dried fish maw that costs a whopping $15,000 per pound. According to the Wing Hop Fun website, the fish maw, which comes from the air bladder, is high in protein, collagen and vitamins and low in fat, making it an optimum ingredient in a post-partum soup.

Another popular delicacy not seen on the show is bird’s nest, which is made from cultivating bird saliva, which is then dried, hardened and shaped. It’s also high in collagen and also used to stimulate the libido. As you can imagine, bird’s nest is insanely expensive, with a premium 21-ounce box going for over $2,000.

Back at home, Jessey and Cherie discuss the upcoming birth of their son Jevon (to learn more about his unusual name, which is NOT Chinese, click here).

Ideally, they are aiming for August 8, or 8/8, as the number is extremely lucky in Chinese numerology. In fact, many Chinese couples plan to have their babies born on that date, with some moms going as so far as to try inducing/or holding labor on that date.

The Mandarin word for 8 (ba) sounds close to the word for fortune (fa), so a child born on August 8 would have double happiness. It’s also why you see 8 on the license plates of many Chinese people’s cars and also in house and phone numbers. 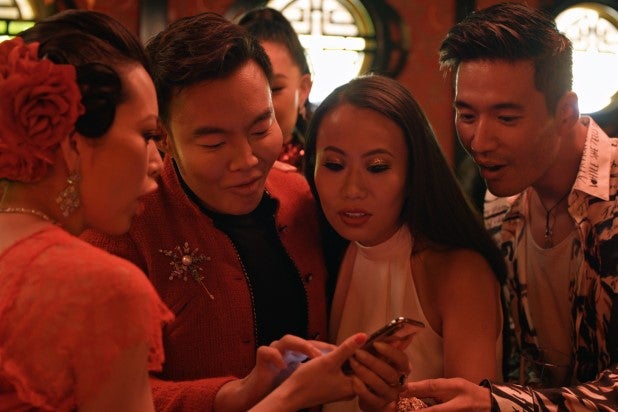 Kane, who is of Singaporean Chinese descent, holds a Singapore Day party for the cast. Unlike the Lunar New Year, it is not a traditional holiday. Instead, the date commemorates Singapore’s independence from Malaysia in 1965. Also called the National Day of Singapore, it’s observed on August 9. During the party, the cast learns Cherie has delivered baby Jevon, so it appears she may have just missed giving birth on August 8.

Anna tells the new mom to save her placenta. According to Quartz, while human placenta has been used in traditional Chinese medicine, the practice of mothers consuming their placentas is a relatively recent phenomenon (and practiced by non-Asian moms as well).

Obviously, baby shoots are a modern, Western convention. Baby Jevon is dressed in multiple outfits for an Anne Geddes-like photoshoot. One of the looks is Jevon wrapped all in red (the luckiest color) and surrounded by red envelopes (also seen during Chinese New Year) for prosperity.

Besides New Year, the Mid-autumn Festival is another major holiday. Kelly’s mom Emily explains it’s like the American Thanksgiving, a festival of harvest. The lion dancers make a reappearance here, as do butterflies (this time in Kelly’s fancy headdress).

Things turn sour at the celebration when Kevin calls out castmates Kim Lee and Guy Tang for rummaging through Anna’s house without permission and discovering a sex toy in her bathroom.

Master Yang studies Kelly’s “M-shaped” face and says she’s independent. He follows by reading her hand and tells her it’s okay to “keep looking” past her volatile relationship with her on-again/off-again boyfriend Andrew. Christine, on the other hand, is very skeptical after Yang predicts she will have five children. 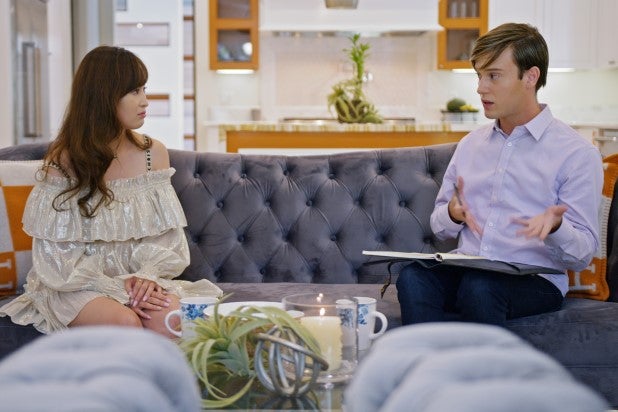 Still reeling from the death of her mother Cindy, Cherie invites Western medium (and reality TV star) Tyler Henry over. Tyler tells Cherie that Cindy will make herself known to Cherie.

Comforted by that thought, Cherie ponders if Cindy has come back as baby Jevon. After her daughter Jadore calls Jevon “po po” (the Chinese word for grandma), she is even more convinced.

“In Buddhism, reincarnation is definitely possible,” Cherie says during her confessional.

When Kevin visits Kane in his condo, Kane tells him to remove his sneakers. Most Asian people remove their shoes before entering the home. The reason is practical; you don’t track dirt and germs into your house. In Japan, where real estate is limited and space is limited, there is often a demarcation right when you enter a home (either a bilevel or painted off area) where guests are expected to remove their shoes.

Ironically, Kane allows Kim to enter without taking her heels off. He also has an entire wall of shoes that he swaps out with his bare hands.

The tradition is rooted in history when infant mortality rates were higher; if a baby reaches 100 days he/she is in the clear.

A close inspection of the menu shows that red eggs are served, another symbol of luck. An alternate name for the 100-Day party is a Red Egg and Ginger Party. As with the black stew, eggs are served for protein and pickled ginger is served for cleansing.

And of course, red envelopes appear again as gifts for the newborn.