Scottish meteorologist Carol Kirkwood has spent more than 20 years at the BBC and usually presents the weather forecast on BBC Breakfast. If Carol is unable to host, emerging presenter Owain Wyn Evans often steps in to give the latest weather news. However, on Saturday, Ben Rich arrived to host and it didn’t go unnoticed by viewers.

Taking to Twitter one viewer quizzed: “WHERE IS CAROL KIRKWOOD THE WEATHER LADY? She is missed so much…”

Another tweeted: “What happened to that new Welsh weather forecaster?”

Carol first joined the BBC as part of their secretarial reserve in the nineties before working in different sections and falling in love with meteorology.

She trained with The Met Office and presented forecasts on The Weather Channel before returning to the corporation. 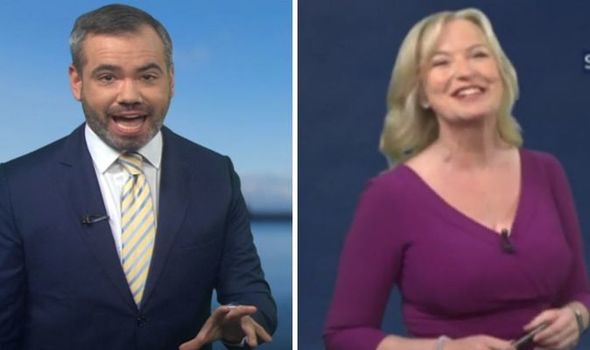 The 58-year-old rose up through the BBC’s ranks and admitted she considered BBC Breakfast her “dream job”.

However, emerging weather presenter Owain is tipped for a bright future at the BBC and some claim he could get Carol’s job if she decides to leave.

Earlier this month, one fan branded him the star’s “heir apparent” after watching his broadcasts during the weekend.