This is part of an ongoing series that looks at the history of disability issues in television. You can find Part One in the series here and Part Two here. As a disabled writer, I will use both person-first and identity-first language interchangeably for purposes of brevity and clarity.

Animation and children’s programming long have been at the forefront of disability representation. They’ve never solely been focused on introducing disability in children’s lives early — more often than not, they are creating fully-fleshed out characters to help children who might be disabled themselves.

I talked in the first part of this series about watching “The Wild Thornberries” as a kid and seeing the character of Bethany, who used a wheelchair. It wasn’t until after I wrote it that I realized I had an earlier experience: During the first four years of school I was asked constantly if I once had been on “Sesame Street.” I always thought it was cool to hear this, because I assumed they were obviously confusing me with some girl who had brown hair or wore glasses.

Never did I assume it was because I was disabled. It wasn’t until years later that I learned I was being confused with actress Tarah Schaeffer, who was a regular on the series and was a wheelchair user with my same disability.

Like many series in the 1970s and 1980s, disability was quickly spotted on children’s shows of the time. Just two years after it debuted, “Sesame Street” broke barriers by casting deaf actress Linda Bove — who you might remember as Allison in that very special episode of “Happy Days” — as a character of the same name. Bove’s character would introduce children to sign language but, more importantly, her character would become a series regular on “the Street,” eventually developing a romantic relationship with fellow “Sesame Street” regular Bob (Bob McGrath).

It’s often said that children should be shielded from the harsh realities of the world and acknowledging disability becomes part of that conversation. Rosemarie Truglio, Vice President of Education and Research for “Sesame Street” producer Children’s Television Workshop, said the series always has been cognizant of that stigma. “Babies notice differences,” she told IndieWire. “And they’re noticing differences because they’re trying to figure out the world around them.” Adults, she explained, are the ones generally left uncomfortable, leading them to punish children for their curiosity about differences, which then leads  to internalized behavior. 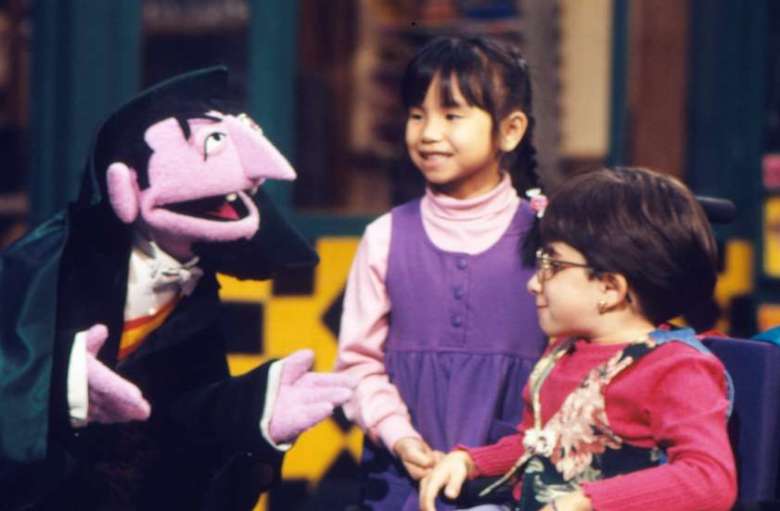 The Count and Tarah Schaeffer on “Sesame Street”

“The Street is grounded in reality,” Truglio said. “And it’s really about who makes our community.” Disabled characters would show up here and there on other children’s shows, like Jeff Erlanger’s memorable turn on a 1981 episode of “Mister Rogers’ Neighborhood,” but Bove was the first to become a permanent resident next to Big Bird and company and she’d spark more appearances by other disabled characters and real-life people, including the late Christopher Reeve.

“When we brought on Christopher Reeve there was a lot of discussion about that,” Truglio said. Many assumed Reeve’s wheelchair would be too scary for children. But Reeve, along with his son Will, not only were able to show kids how wheelchairs help people who need them, but became a wonderful moment for father and son to have a frank talk about disability.

Because the show deals with puppets, the puppeteers are usually sitting or laying on the floor with their arms raised with the goal to put them on the same level as the human actors. When Ben Lehmann, executive producer for “Sesame Street,” first arrived on the series, he took note of the large wooden platforms everyone was using.

“Some carpenter who had been there for 30 years explained ‘Well, they were designed for Tarah,’” Lehmann said. The “Tarah platforms,” as they’re called, are the width of a wheelchair and can be stacked so that the height can be adjusted for anyone, whether they’re in a wheelchair or not, to be on the same level as the puppets.

“Sesame Street” led the way and numerous other series have followed suit, especially in the world of animation. When it comes to animation the rules are limitless — and that extends to creating a landscape populated with disability. “In an animated world there’s no reason not to [include disabled characters],” said Johanna Stein, executive producer of the animated kids’ show “Madagascar: A Little Wild.” Because an animated show creates everything from scratch, there’s no reason not to fill it with more disabled characters than you’d find anywhere else. 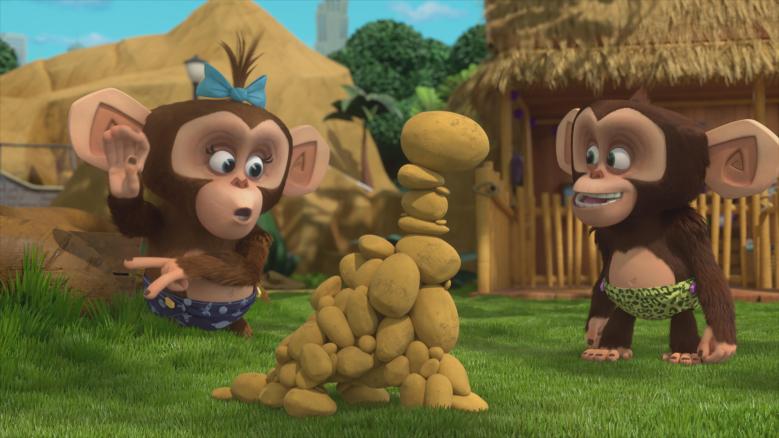 Pickles and Dave from “Madagascar: A Little Wild”

The PBS series “Arthur,” based on the series of children’s books by Marc Brown, first touched on disability in 1996 when they showed series regular Buster needing glasses. Carol Greenwald, executive producer for the series, says the show received so many messages from kids that it was a no-brainer to go further. Other characters have tackled disability head-on, from blindness to disability to autism — but what’s important is showcasing those character in stories that don’t confront disability in the same overt manner.

In children’s programming the goal isn’t to make every disabled narrative turn into “event programming.” In the “Arthur” episode “The Princess Problem,” wheelchair user Lydia Fox and Arthur’s little sister D.W. are talking about a group of superhero princesses. Lydia no longer likes the group because there isn’t a character who uses a wheelchair. The goal, according to Greenwald, is to use these stories to “open a kid’s eyes to the fact that not everybody is represented in these kinds of groups.” Hopefully, those dealing with the same issues can identify.

Stein calls it “casual representation” and it’s something the team behind “Madagascar: A Little Wild” have been using for their deaf character of Dave, whose sister, Pickles, is his interpreter. “We never wanted to point to it [Dave’s] disability,” Stein said. “It’s just a fact of who Dave is.” The goal, then, becomes to help children model appropriate behavior when they do interact with someone who is disabled, while simultaneously creating representation for disabled children. The show wanted to avoid tokenizing Dave, or making him the stock disabled character. “It was very important that Dave be an equal partner,” Stein said.

But even in the world of animation and shows aimed at kids, inclusion can be improved upon. There’s a need for voice actors with disabilities to voice disabled characters. Dreamworks Animation’s children series “Spirit Riding Free: Riding Academy,” recently cast wheelchair actress Cassidy Huff to voice the role of Eleanor, a world-class equestrian rider who uses a wheelchair. But the majority of disabled characters are voiced by able-bodied actors. One such actor is Rob Tinkler, who provided the voice of wheelchair user Pelswick on the Nickelodeon cult show of the same name. 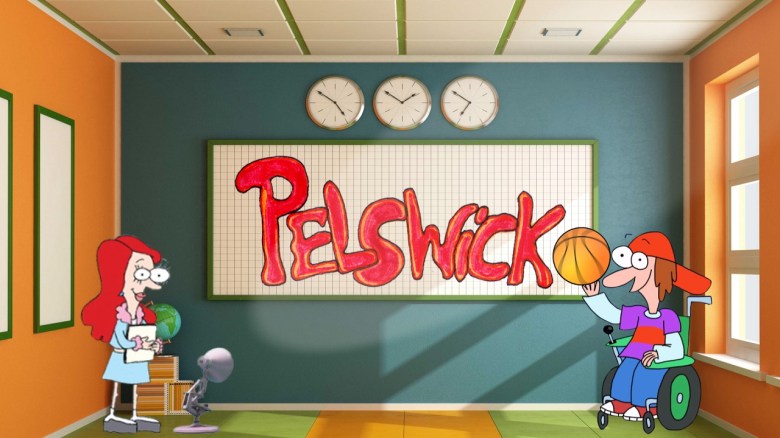 Created by disabled cartoonist John Callahan, “Pelswick” was unlike anything children had seen and Tinkler knew it was special. “What I really loved [about the character] was his eternally positive yet acerbically comedic way,” Tinkler told IndieWire. Ironically, Tinkler never had the opportunity to meet Callahan, who died in 2010, nor did he know the artist was actually in a wheelchair. But to watch “Pelswick” during its brief run in 2000 was to see a disabled character for kids that was witty, frank, and honest. Most importantly, he was the leading character of the entire series.

Looking back on it now, Tinkler said there should have been (and should be) a more thorough search for disabled voice talent. Tinkler walked away from many roles, including voice character of color, because of the need to be more diverse in voicework. “[Someone might say] ‘Yeah, I know, but it’s just a couple of lines.’ But this is a couple of lines that would mean a lot to somebody who could play this,” he said.

In the case of “Arthur” and “Madagascar: A Little Wild,” Stein and Greenwald admit there aren’t disabled writers working on their respective series nor are there animators with disabilities, and it’s something they want to change. In the case of “Arthur,” the Corporation for Public Broadcasting provided funding to native Alaskan writers to work on “Molly of Denali,” an animated kids show produced by the same production company as “Arthur.” Greenwald says that search galvanized them to do more and they hope they can receive more funding to bring on disabled writers. Stein is similarly committed: “I say this as much out of a sense of responsibility and as a sense of need but it’s crucial to better programming.”