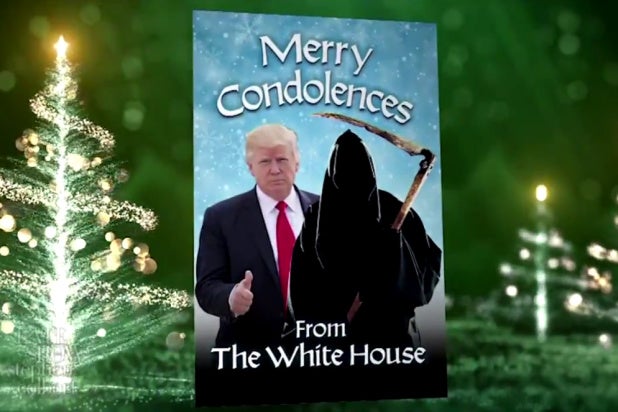 Donald Trump and the folks in his administration have been downplaying the COVID-19 pandemic from the very beginning, scoffing at any and all measures to restrict the spread of the virus and carrying on as if everything was normal. The latest example: An indoors Christmas party at the White House on Tuesday, which “The Late Show With Stephen Colbert” mocked in a skit that opened Thursday night’s episode.

The party was notable not just because it took place inside and few attendees wore masks — a combination that has proven deadly for many Americans as thousands die each day. The party also saw Trump tacitly admit he lost the election by teasing another run at the presidency in 2024.

But “Colbert” kept the focus, for the purposes of this little skit, on the fact that this party featured folks in close quarters during a global pandemic while few of the attendees made any attempt to protect themselves or others from the virus.

Watch the full skit from Tursday’s “The Late Show With Stephen Colbert” below.

Most notably, the “Colbert” skit introduced a new party guest we didn’t previously know about: Death. As in, the physical embodiment of death in the form of a skeleton wearing a robe and holding a scythe.

The short skit largely consisted of photo booth jokes. There’s people coughing while having their picture taken, and one of a woman kissing a coronavirus particle. At the end, we get a fun rendering of a Trump Christmas card, with Trump himself standing next to Death.

But instead of saying “Merry Christmas,” the card read: “Merry Condolences.” That’s pretty morbid, though Colbert is certainly no stranger to that sort of “upbeat in tone but sad in its substance” humor.

The New York Times recorded 1,857 new COVID-19-related deaths on Thursday, bringing its total confirmed number of American deaths from the coronavirus pandemic — Trump cabinet member Herman Cain among them — to more than 275,000. Wednesday and Thursday were the deadliest days of the pandemic thus far.