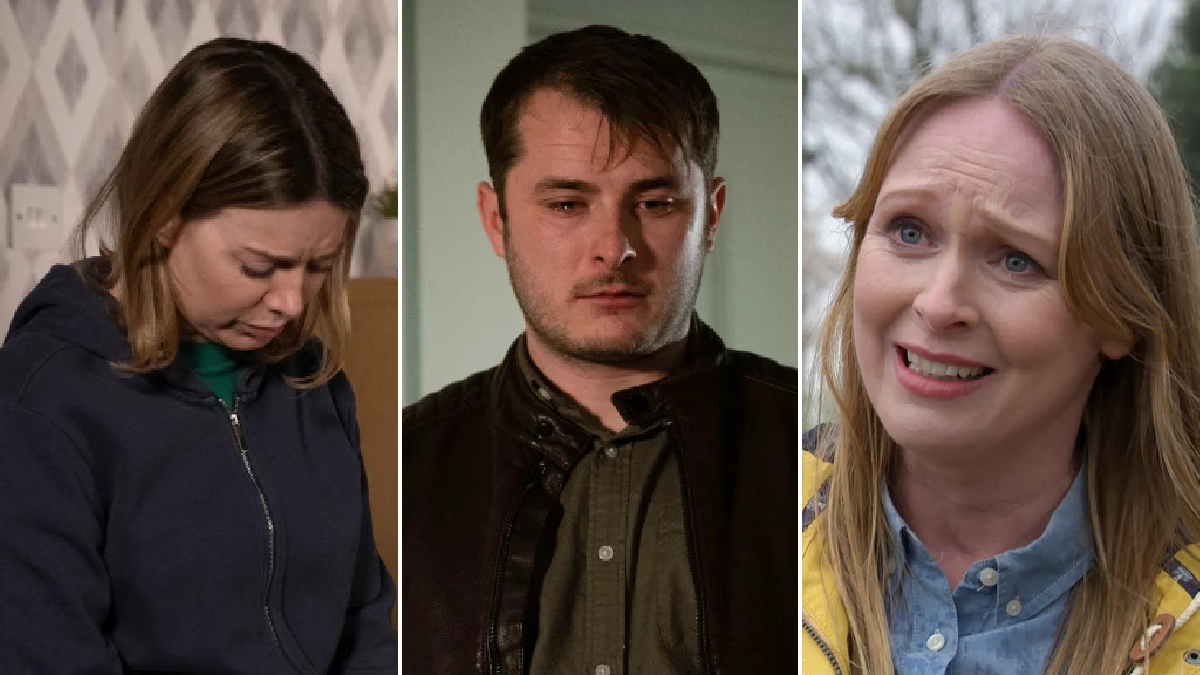 A new week brings with it drama aplenty for the mainstays of our favourite soaps, with major discoveries and blasts from the past all on the cards.

Abi Webster sets her exit plot in motion in Coronation Street, but will she manage to make it out of the street before it’s too late?

EastEnders, meanwhile, sees Lewis Butler rape Ben Mitchell in harrowing scenes. Over in Emmerdale, Suzy Merton has some explaining to do.

And last but not least, Ollie Morgan and Brooke Hathaway receive a big blast from the past, as their two-year-old son Thierry comes back into their lives.

It’s going to be a week of change, that’s for sure, and here’s just a selection of the biggest developments ahead.

Tyrone and Phill go to war over Fiz in Coronation Street

Tyrone’s suspicions about Phill are realised when Hope makes a discovery on his laptop. In a bid to get revenge, Hope enters the digger, and proceeds to pull the lever, sending the arm of the digger straight through Phill’s windscreen! Ty, meanwhile, picks up Fiz’s belongings from Phill’s, but a fight ensues, and the pair end up brawling in wet concrete! Phill, however, loses an engagement ring, but upon finding it, he pops the question to a stunned Fiz!

Ben and Callum argue, and some difficult words are shared between the two, leaving both wondering if this truly is the end of their marriage. Ben heads to The Vic to drown his sorrows, and sends message to Lewis on a dating app. He meets up with Lewis, and flirts with him. After the Prince Albert shuts for the night, one thing leads to another, and they find themselves upstairs. Ben reconsiders having sex with Lewis, after he receives a selfie from Callum and Lexi. Lewis, however, refuses to let him go, and rapes him.

Vanessa is stunned after Leyla lets slip that Suzy knew Holly, and she wastes little time in confronting her girlfriend. Suzy, feeling guilty, attempts to break up with Vanessa, but Vanessa convinces her to give their relationship another go. Leyla, meanwhile, is concerned about where she’s going to get her next fix, as Suzy tells her she’s going to start living a cleaner life.

Ethan arrested for murder in Hollyoaks?

Ethan’s world comes crashing down, as Zoe reveals that Maya’s body has been found – and he is prime suspect! Saul, meanwhile, warns Zoe that she’s jeopardising her career by dating Sam, given that his uncle is thought be involved in Maya’s murder.

Abi calls at Toyah’s, asking if she can have Alfie for a full day next week. Toyah agrees, as does Imran. Abi, however, is planning on kidnapping her son, and she reveals her plan to Kevin, who admits that he’s still in love with her. Abi asks him to keep shtum, but Kevin later spots Imran in the street. Will he dob Abi in?

Stuart opens up to Rainie in EastEnders

Rainie discovers pills Stuart has tried to dispose of and realises Stuart has been lying about taking his painkillers. Rainie questions why Stuart would make her believe he’s addicted again but Stuart rushes off to his chemotherapy appointment and avoids Rainie. Rainie’s heart breaks when Stuart admits he has no feelings towards Roland.

Moira take Faith to the hospital, and urges her to tell her kids about her diagnosis. Faith, however, fears that Cain will lose his temper, knowing that she kept a secret from him. Trying to be strong, Faith tells Moira to head back to the farm and she’ll let her know when she’s done. Drawn and weary after her procedure, she worries as she struggles to get a hold of Moira.

Ollie and Brooke reunite with Thierry in Hollyoaks

Ollie prepares to reunite with his estranged son, Thierry! His family urge him to tell Brooke, but he ultimately decides to keep it to himself. Cindy, however, puts her foot in it by revealing the news to Brooke, and just as they go to confront Ollie, they are faced with their son and his adoptive parents. When backs are turned, Brooke finds themselves alone with Thierry, and a misunderstanding leads to panic.

Summer in danger in Coronation Street

Summer secretly tips her insulin down the sink, before setting off for a maths exam. Her vision becomes blurred during the exam, and she’s horrified to realise she’s left her diabetic kit at home. Summer is subsequently loaded into an ambulance, tearfully explaining to Aadi that her blood sugar level is sky high.

Frankie invites Jay to Clara’s photography exhibition and when Lola spots the exchange, she gets the wrong end of the stick. Clara isn’t happy to see Frankie stealing her thunder and things get worse when Lola barges in and accuses Jay of cheating with Frankie, causing a scene. Clara enjoys the drama.