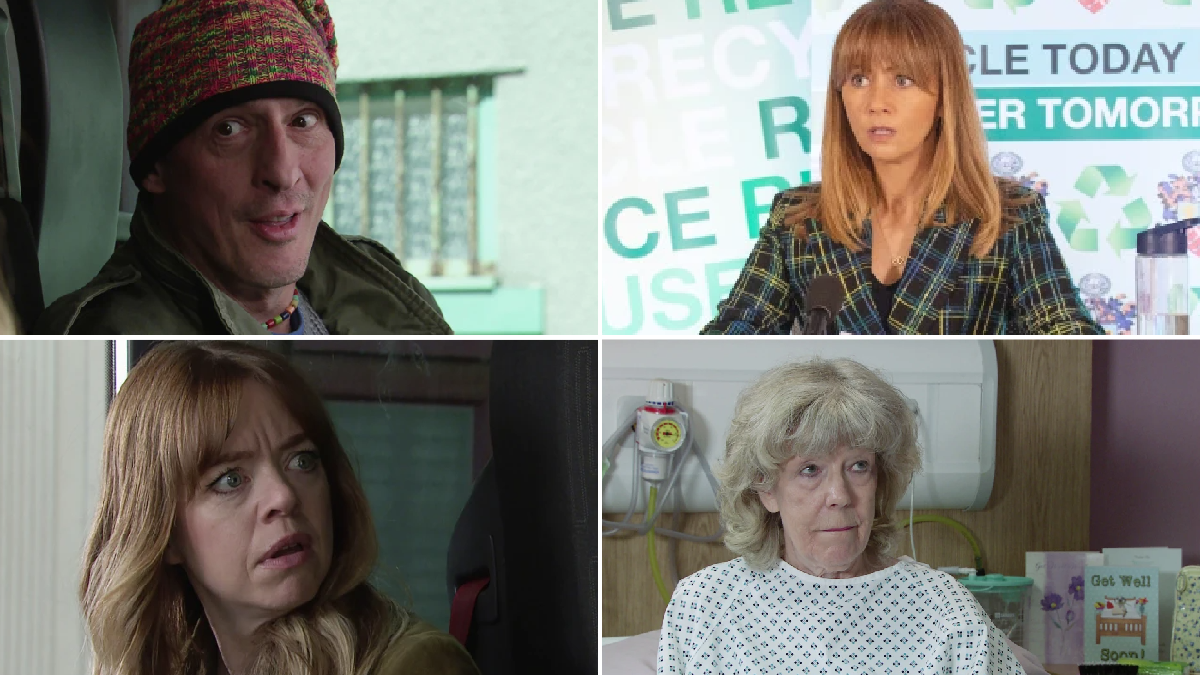 Toyah Battersby (Georgia Taylor) is seriously struggling as she faces murder charges and she soon distracts herself by throwing her energy into a big local campaign in Coronation Street.

But she is stunned when she soon comes face to face with her old eco warrior sweetheart Spider Nugent (Martin Hancock).

They have some catching up to do!

Elsewhere, there’s torment ahead for Maria Connor (Samia Longchambon) as the vile campaign against her takes an even more sinister turn.

A stressed Maria bites Max’s head off in the barbers as she worries about the video, while coming under fire from her neighbours over their unemptied bins.

Carla warns Peter to think carefully about rejecting the life-changing sum of money on offer from Thorne. Simon also points out to his dad that a hundred grand could change their lives forever.

As Peter begins to waver, Thorne clocks their exchange. Meanwhile Peter meets up with Tricia the nurse and, realising she can’t offer any new evidence, confides he’s thinking of giving up the fight.

Stephen apologises for blaming Gail for Audrey’s accident and offers to broker peace between mother and daughter.

At Audrey’s bedside, with Gail in tow, Stephen firmly warns her that if they don’t patch things up, he’ll be on the first plane home. Will Audrey thaw towards Gail? There’s a frisson of attraction between Stephen and Elaine as he thanks her for her help.

Todd tells George today’s the day to expose Frank’s bullying ways. When George reveals Frank once flushed his head down the loo for spilling water on him, Todd forms a plan and sloshes a drink down Frank’s shirt. How will Frank react?  Ed’s not happy to hear Tim talking to Ronnie about how Aggie is feeling neglected by her husband and accuses Tim of meddling in their relationship.

A Thorne in Peter’s side

As they await the verdict on Thorne from the GMC, Carla urges Peter to be grateful for his health and focus on their future.

Thorne meets Peter in the pub and orders him not to undo all his skilled work and embrace the second chance he has to live. As Thorne gets into his car Peter can no longer contain his rage and angrily confronts him.

Maria reckons the police need informing about the threats she’s receiving. Despite Gary’s misgivings, Maria refuses to hide away and hosts a press conference. As she’s heckled by Jimmy, the refuse team leader, Gary decides that he’s behind the online alias making threats and aggressively pins him against the wall.

Maria decides that being on the council isn’t worth all the strife it’s putting their family through. Sally’s shocked to hear that Maria’s withdrawing from local politics and, explaining that she’s been in her position, implores her not to be beaten in her quest to make a difference. Will Maria be swayed?

Telling Leanne she intends to repay her the money for her legal bills, Toyah returns to work at Underworld. But with Toyah snapping at customers on the phone, Jo Lafoe warns Sarah that employing someone charged with murder isn’t a good look.

When George overhears Frank threatening someone over the phone, he makes a decision and finally explains to Sean how Frank made his school days a misery by humiliating him at every turn. Despite Frank’s insistence that he’s changed, Sean finishes with him.

Fiz gets worked up ahead of a pre-wedding visit from Mimi as Hope kicks off about her bridesmaid dress and Fiz worries her veil is frayed. As Fiz asserts that everything needs to be perfect, Hope earwigs from the hallway.

Along came a Spider

Trying to distract herself from her troubles and Leanne’s lack of faith in her Toyah mounts a protest against waste incineration. Leanne refuses to back off and insists she wants to help. Toyah invites her to join the protest. Leanne, Mary, Brian, Nina and Asha join Toyah and the gang of seasoned protestors she’s mobilised, and successfully block in the council bin wagon on Victoria Street. Toyah leaps into the cab of the bin wagon much to Leanne’s dismay.

A man picks his way through the protest group and clambers into the cab next to her. Toyah’s gobsmacked to see it’s her ex-boyfriend, Spider Nugent. As the pair catch up and reminisce, Toyah breaks down about Imran’s death. She invites Spider to stay over.

Much to Evelyn’s dismay Fiz is forced to ask Phill’s mum Mimi to stay when she tells them no hotel will take Coco her dog. But when Mimi is knocked flying by Cerberus and sustains a sprained hip it is evident that Evelyn and Mimi living under the same roof is going to be a strain for everyone!

As Peter refuses to forgive Simon for falling for Thorne’s trick a frustrated Carla lectures Peter about being bitter. Heading to the police station to pick up a fair Peter is surprised to see it is Nicky who has been arrested for no reason. The pair bond over their shared contempt for authority trampling over the little man. Peter tells Daniel and Carla about his encounter with Nicky but he is shocked by Daniel’s response.

Aaron and Summer plan their holiday in Spain. Summer admits she’d rather focus on tourist attractions as she’s not confident enough to sunbathe in a bikini. Aaron’s sympathetic.Aaron clocks Summer’s unease when he reveals they have been given a free water sports session with their holiday booking.  Summer admits a skintight wetsuit isn’t for her. Feeling bad about the holiday, Summer tells Aaron she intends to look on the water sports as a personal challenge for herself. Aaron’s pleased by her positivity. Summer runs her hands down her body and, hating her shape, tips away her insulin.

Liam has a Star Trek themed birthday party at the bistro. Gary pulls him, Maria, Kelly and Jake in for a family selfie but the happy moment is short-lived when Maria orders him not to share it online for fear of another backlash. Maria’s upset that she chose to censor herself by not sharing the family selfie, and tells Gary that her trolls are winning by making her scared. Gary comforts her.