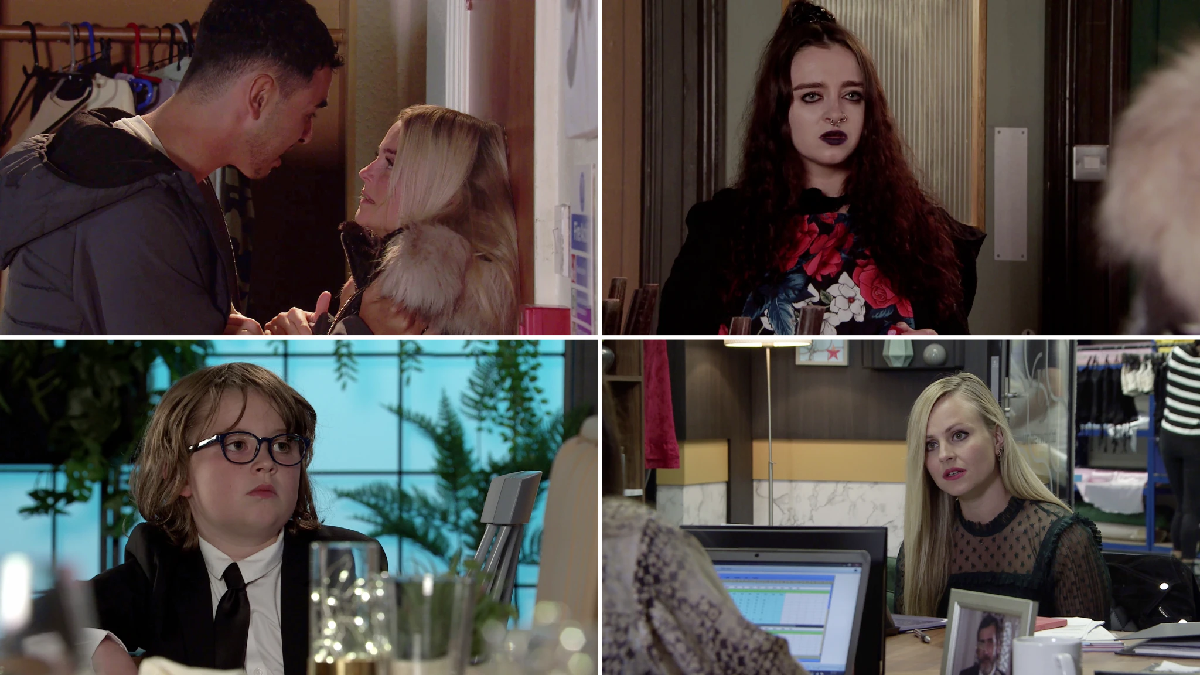 Kelly Neelan (Millie Gibson) has been released from prison but reintegrating into Coronation Street is not going to be easy – as Nina Lucas (Mollie Gallagher) can’t bring herself to forgive her. As Kelly ends up going missing, she is led into serious danger.

Elsewhere, Sam Blakeman (Jude Riordan) continues to struggle with the loss of his mum and Nick Tilsley (Ben Price) is more afraid than ever. Can he get through to his agonised son.

Kelly’s appeal hearing takes place and the judge declares that she’s releasing her with immediate effect. Imran runs into Sabeen at the court and Sabeen assures him that she’ll always be there for him. How will he react?

After a visit from the social worker, Imran and Toyah are appalled to realise they might have to choose between Kelly and Elsie.

Ronnie takes James to one side and urges him to have a word with Danny about turning down the job offer. James confronts Danny and suspects it’s because of him. What will Danny do?

As the funeral cars pull up on the street, Sam slips his hand into Nick’s, who squeezes it tightly. Audrey, David and Shona watch, heartbroken.

Summer offers to babysit for Bertie. In return, Daniel agrees to help her prepare for her Oxford interview when he gets back.

With the funeral over, the mourners gather in the Bistro to say farewell to Natasha. Sam silently hands Nick a piece of paper on which he’s written a eulogy to his mum. As Nick reads out Sam’s eulogy, he struggles to contain his emotions.

Abi hands Jack a document and explains that she’d like to adopt him if he’s still happy to have her.

Summer tells Daniel how much she’s enjoyed looking after Bertie. Daniel’s pleased and suggests they make a start on her interview prep. As Summer comes out of Daniel’s flat, she bumps into Aadi. Aadi’s delighted to see her and glancing wistfully back, Summer paints on a smile for him.

Imran and Toyah fervently hope they’re not made to choose between their girls. Kelly returns to the street and approaches Nina in a bid to build bridges, but Nina makes it clear that she will never forgive her.

Toyah reveals to Kelly that Imran cheated on her and they’re no longer a couple. Kelly urges Toyah to give Imran a second chance. Toyah reluctantly reveals to Kelly that Elsie might have to move out. Kelly reaches a decision and for Elsie’s sake, tells Lou she wants to live somewhere else.

Imran and Toyah are disappointed to learn that Kelly has chosen to move out. Toyah tells Imran that she’s willing to give him a second chance.

Later, Kelly lets herself into her supported living accommodation to find someone has sprayed the word ‘murderer’ on the wall.

James urges Danny to follow his dream and accept the job in London. What will Danny decide?

When Hope reveals she has to build a model of the solar system for her science project and Phill has offered help, Tyrone insists he’ll be the one to help her.

Phill calls at the garage and hands over the kit to build a solar system model. Tyrone’s begrudgingly grateful.

When Daniel reveals his babysitter has let him down, Summer suggests she gives Max his coaching in Daniel’s flat so she can look after Bertie at the same time.

Gazing at her adoringly, Max thanks Summer for his lesson. Daniel suggests to Summer she stays and shares his takeaway. Adam calls round and quizzes Daniel about his intentions towards Daisy. Mistakenly assuming they’re discussing her, Summer’s thrilled.

In her supported living accommodation, Kelly scrubs away at the graffiti on the wall. When Kelly enquires after Nina, Dev reveals that Nina is in bits, having lost Seb’s ring.

Kelly presents Nina with a ring, making out it’s the one she has lost. Nina isn’t fooled and Kelly admits that she took a trip to York in a bid to find a replacement as a way of showing her how sorry she is.

Nina chucks the ring back at her, leaving Kelly heartbroken. In the cafe, Roy advises Nina to cut Kelly some slack as she appears to be genuinely sorry.

Aadi broaches his London plans with Dev, hoping he’ll fund his rent. Dev tells Aadi that rather than lose him to a London firm, he’d like to make him general manager of his three shops.

When Bernie reveals that Dev can’t afford to bankroll his move to London because he spends all his money on Asha, Aadi’s gutted to think that’s the real reason for Dev’s job offer.

Dev takes delivery of his new car. Later, Dev sees the scratch on his car and he assumes Kelly to be responsible.

Craig questions Kelly about the vandalism to Dev’s car. Kelly assures him she spent the afternoon in York with a mate. Craig reveals that Kelly’s so-called mate reckons he hasn’t clapped eyes on her all day. Is Kelly telling the truth?

Nick and Leanne agree it’s time to seek professional help for Sam. After a zoom appointment with Sam, Dr Gaddas confirms that she’s referring him to Mental Health Services for talking therapy.

As Summer heads out of class, she spots two tickets for The Importance of Being Earnest on Daniel’s desk. Daniel catches up with Summer in the school corridor and asks her if she’s free this evening, and he explains that he’d like her to babysit.

In the corner shop flat, Adam warns Daniel that Daisy is trouble and he’ll end up getting hurt.

Meanwhile, Dev reveals that the police are checking the CCTV. Aadi returns home and points out how he rescued Asha but left him to die in a burning car. Dev does his best to reassure Aadi that he loves him and his sister equally.

Asha arrives home and Aadi turns his anger on Asha, telling her he’s spent his whole life playing second fiddle. Aadi slams out of the house.

Kelly approaches Nina and Asha outside the chippy and assures them she didn’t key Dev’s car and is telling the truth about her trip to York. Will they believe her story?

In the factory, Sarah notices the Dexter order is due out to the States in two days’ time. A stressed Carla promises to sort it. After a tip-off from Sarah, Peter drags Carla out for lunch and admits that he’s worried about her.

Tyrone calls at Number 9 just as Phill arrives back from the school run with Hope and Ruby. When Phill reveals that Ruby’s been invited to a party, but Hope’s not welcome, Fiz is annoyed, but Tyrone assures him it’s not his fault. At the kids’ party, Tyrone makes it clear to Penny that he’s not impressed by her attitude towards Hope.

Having been left to look after Sam, Simon does his best to persuade him out of his room, but without any success.

Carla tears a strip off Sarah for whining to Peter and announces that she’s taking two weeks’ holiday as of now. Knowing how busy they are, Sarah’s horrified. When Carla reveals she’s booked some time off to recuperate and deal with her grief over Johnny’s death, Peter’s overcome with relief.

Aadi asks Summer if he can crash on their sofa. Aadi and Kelly strike up an unlikely friendship and Kelly tells Aadi he’s welcome to crash at her digs.

As Kelly and Aadi approach her digs, Cole appears and threatens Kelly, revealing that she’s inadvertently dobbed him into the police as he used their trip to York to pick up a consignment of stolen phones.

Isla approaches Tyrone and Phill and was impressed at the way Tyrone put Penny in her place. Isla suggests they all go for a milkshake together.

While Hope and Isla’s daughter Darcy giggle over their milkshakes, Isla flirts with Tyrone and suggests they meet for a drink sometime. When Tyrone reveals that he’s agreed to a date with Isla, Fiz is annoyed.

Summer arrives at Daniel’s flat for babysitting duty. Daniel collects Daisy for their theatre date. Daniel returns home and hastily ushers Summer out of the door. As Summer heads off, she turns, only to see Daniel welcoming Daisy into his flat.

Leanne talks to Sam through the locked bedroom door and tells him she understands his pain but as part of his family, she just wants to help. Will Sam soften to Leanne?