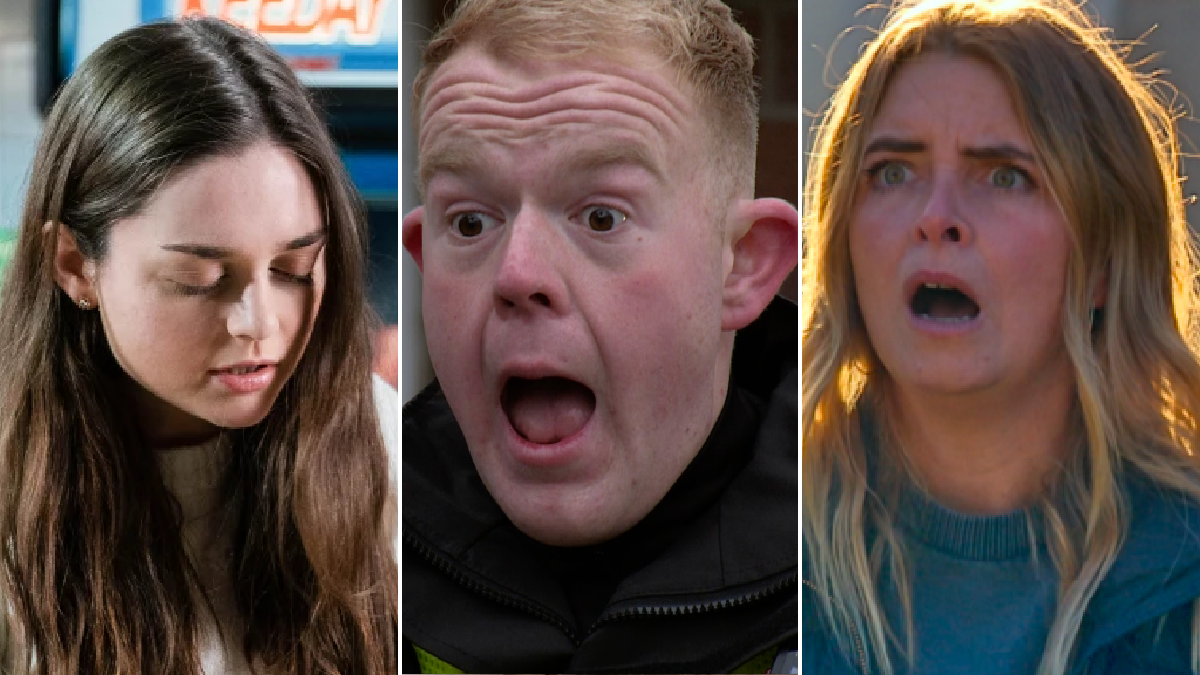 A number of big returns take centre stage in the soaps this week.

Luke Morgan is stunned in Hollyoaks to be faced with one of his attackers, Stephen McGregor, while Emmerdale sees the highly-anticipated comeback of killer Meena Jutla, who is out for deadly revenge.

Over in Coronation Street, discoveries are made, as the truth about Ted’s death is finally revealed.

It’s another unmissable week in soapland, that’s for sure, and here’s everything you’ve got to look forward to.

Sally arrested as Tim’s operation goes ahead in Coronation Street

Tim begs Kevin to speak to Sally for him, hoping he can make her see how sorry he is for not telling her about his triple heart bypass. Will Sally forgive him before the operation? That remains to be seen, but as the anaesthetic takes effect, Tim hears a commotion coming from the hospital corridor, as Sally is arrested!

Phil breaks up with Kat in EastEnders

Unable to tell her the truth about his sentencing, Phil breaks up with Kat! Kat, heartbroken, relays the news to Sharon, who quizzes Phil, determined to find out what’s going on. Phil ultimately comes clean, admitting that he’s facing life in prison. Sharon is stunned, and subsequently gives him an ultimatum: tell Kat, or she will do it for him!

Meena is back in Emmerdale

Dawn, determined to tie the knot with Billy as soon as possible, posts a ‘save the date’ announcement on social media. Meena, meanwhile, sees the announcement in a park, and seethes – hellbent on revenge.

Following his admission, Warren collapses and has a seizure. Will he be okay? That remains to be seen, but Joel swoops in to save his dad, and keeps a watchful eye on him in the aftermath. Misbah warns Warren that a change of lifestyle is necessary, but will he listen to what she has to say?

More bad news for Faye and Emma in Coronation Street

Craig is summoned to the station immediately after taking a call from a fingerprint expert, leaving Emma worried sick. It’s a false alarm, however, as he returns home, revealing he’s in trouble for wasting police time. But the nightmare is far from over, as Craig reveals that Ted’s post mortem indicates he was run over, which could’ve triggered the blood clot that killed him.

Chelsea is prescribed anti-depressants from the GP. She’s upset that she can’t breastfeed now, but Denise wants what’s best for her. Gray pretends to agree but it’s clear he’s fuming. He plays on Chelsea’s emotions and, ultimately, she decides not to take the medication. Whitney, however, sees her throw her meds in the bin.

Charity gets dressed up as she heads off the play date with Vanessa. Ryan, meanwhile, receives the terrible news that his adoptive mum Irene has died. He confides in Mackenzie, who attempts to call Charity. Thick in conversation with Vanessa, Charity rejects his call. Mack blurts out the news, stunning Charity to silence, who berates him for not telling her sooner.

Luke sees an old face from the past in Hollyoaks

Becky finds out Cindy has been sending letters to Stephen McGregor, one of Luke’s attackers. She relays her discovery to Ollie, who resolves to meet with Stephen, all the while posing as Luke! Luke, meanwhile, encounters Stephen, and they end up talking about old times, but whether or not Luke truly understands what’s going on remains to be seen. Afterwards, Luke is missing.

Bernie warns Hope to stay away from Joseph and keep shtum about her deal with Clint. She stresses to Joseph to keep quiet too, but Evelyn is on to her. Bernie is forced to defend herself, denying that she had anything to do with Joseph’s disappearance. Evelyn, however, is unconvinced and thus calls the police. Both Bernie and Chesney are hauled in for questioning.

Dana is unwell in EastEnders

Dana calls Peter to let him know that she’s not feeling well and therefore won’t be making it into work. However, she forgets to hang up the call, and Peter overhears her subsequent conversation with Mila and Kioni.