While the Directors Guild of America Awards aren’t exactly the most accurate Emmy forecasters, Saturday night’s virtual ceremony did offer momentum-building wins for a few key programs — and one final prize for a longtime favorite.

As expected, “The Queen’s Gambit” director Scott Frank took home the DGA Award for Best Movie for Television or Limited Series, beating out the likes of Matt Shakman (“WandaVision”) and Thomas Kail (“Hamilton”).

“If I’m honest, I think this award is more a reflection of my uncanny ability to surround myself with people more talented than I am,” Frank said, adding that he’s “incredibly honored” to be given this award, as well as to be a guild member in general.

After an excellent winter awards run, Netflix’s hit limited series starring Anya Taylor-Joy has established itself as an Emmy frontrunner. The series won an AFI Award, PGA Award, WGA Award (for Frank), SAG Award (for Taylor-Joy), and two Golden Globe Awards, for Best Limited Series and Best Actress. All of these should help the breakout drama sustain buzz through the long build-up to July’s Emmy nominations.

In the first award of the night, Susanna Fogel won for directing “The Flight Attendant,” triumphing in a competitive Comedy Series category that saw dual nominations for “Ted Lasso” and “Curb Your Enthusiasm.”

“Thank you to the DGA, thank you to all my fellow directors in my category — and everyone else, for inspiring me,” Fogel said, going on to note that everyone she worked with on the HBO series “is a good human,” proving “it really is possible to be nice and still make great things.”

Vote splitting could have hurt “Ted Lasso” and “Curb Your Enthusiasm,” but if you’re thinking the only hourlong entry had an advantage due to its length, think again. This is the first hourlong episode to win the Comedy Series category since “Pushing Daisies” in 2007 (despite six nominations for “The Marvelous Mrs. Maisel” in the last three years alone). And while DGA winners aren’t automatic Emmy frontrunners, they typically help boost their shows with TV Academy voters. Recent DGA winners include “Barry” (twice) and “Veep” (three times), and both of these shows have been well-recognized at the Emmys — which bodes well for HBO Max’s freshman series.

The love for WarnerMedia did not stop there. Amy Schatz and HBO’s “We Are the Dream: The Kids of the Oakland MLK Oratorical Fest” won the top prize for Children’s Programming, following up its win for Outstanding Children’s Program at the 2020 Emmys. Joseph Guidry won another DGA Award for HBO Max, as voters saw fit to honor his work on “Full Bloom” in the Reality Programs category. And DGA President Thomas Schlamme beat out stiff competition in the Variety, Talk, News, Sports – Special category — including Spike Lee for “David Byrne’s American Utopia” and Marielle Heller for “What the Constitution Means to Me” — taking home his fourth DGA Award for helming “A West Wing Special to Benefit When We All Vote.”

“I just had an image of my dear friend Michael Apted, who also happened to win when he was president, and he mentioned something about a home field advantage,” Schlamme said in his acceptance speech, adding that this award carries adding meaning to him after spending four years on the original “West Wing” series.

Home field advantage or not, Schlamme knocked this gig out of the park. The special episode saw veteran stars of the NBC series return for a staged version of the Season 3 episode, “Hartsfield’s Landing,” in order to support When We All Vote, a non-profit, non-partisan organization dedicated to increasing participation in elections.

“Today, 60 years after the Voting Rights Act, so many states are trying or have already passed legislation to [restirct voting],” Schlamme said Saturday night. “We must do […] all that we can to protect that right for all of us.” 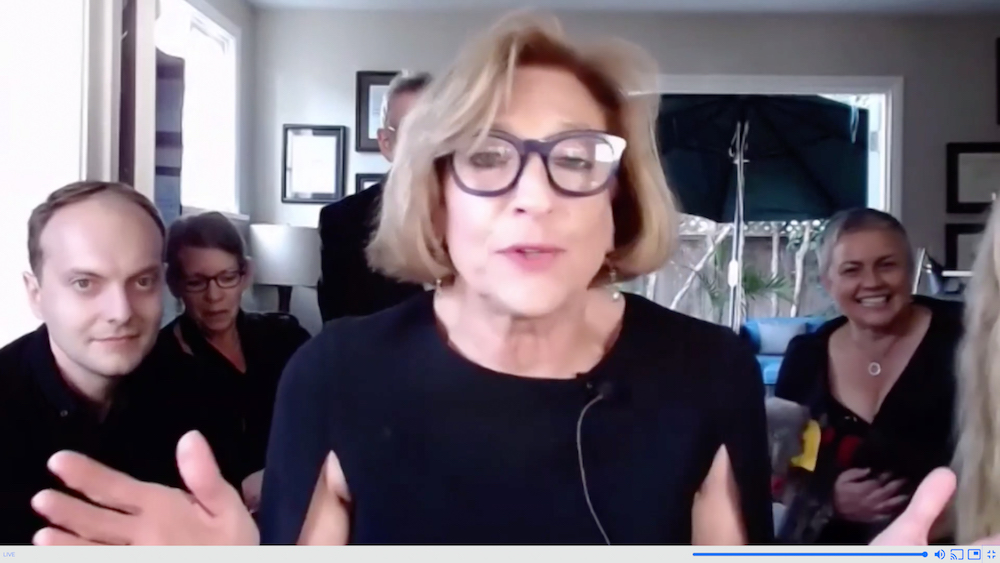 Courtesy of the Directors Guild of America

“I’m surprised,” Linka Glatter said, as her “Homeland” colleagues cheered behind her. “This is my whole, completely vaccinated, director team. […] I love being a storyteller, and in this incredible team sport, I have the most amazing team. I would not be here without all of them.”

“Oh my God, this is ‘Homeland’s’ last hurrah,” she said. “I’m totally overwhelmed.”

The award marked the second DGA win for Linka Glatter on “Homeland” and her third win overall. (She earned her first trophy in 2010 for the “Mad Men” episode “Guy Walks Into an Advertising Agency.”) Linka Glatter was also nominated at last year’s Emmys, which means “Homeland” will not be eligible in 2021. “The Crown” remains this year’s presumed frontrunner in the category (and the Drama races overall), but the British co-production was not eligible for the DGA Awards.

Saturday night served as the first virtual ceremony in the history of the Directors Guild of America Awards. Schlamme greeted the audience watching at home from the DGA Theater Complex in Hollywood, thanking members for their work and efforts throughout the trying year.

“The artistry we honor tonight is due in large part to the sacrifice, spirit, and determination of those who fought for our protections and freedom to bring our visions to life,” Schlamme said in a statement to members. “It is this strong foundation which has continued to guide generations of members in developing the Guild into the vital organization it is today. Never has that mattered more than in the urgency of this year as we overcame the daunting challenge of getting our members back to work safely, and confronted a powerful reckoning of our nation’s systemic ills.”

“Through your creation, people found hope and understanding,” Schlamme said. “More than all, hopefully they saw themselves.”