Super Switch has recorded a soft ratings debut, with SBS's Who Do You Think You Are netting more viewers.

Tuesday evening saw Seven dust-off its couple-swap format two months after Nine's Married at First Sight wrapped-up for another year. While many have been quick to point out the similarities between the two shows, there are key differences – with Seven's "experiment" involving real-life couples. 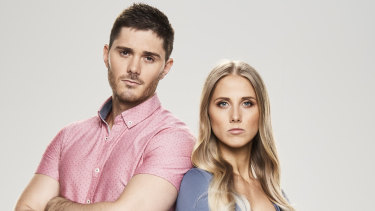 In contrast, Nine's reality offering The Voice recorded almost triple that figure on Tuesday evening. (Nine is the owner of this masthead.) Super Switch was also beaten by the likes of Andrew Denton: Interview, Hot Seat, The Project and re-runs of The Big Bang Theory.

A Seven spokeswoman admitted the ratings were disappointing but said she was hopeful that Super Switch's audience would grow over time, whether on free-to-air or catch-up TV.

"The immediate number that landed this morning, on one measurement, is disappointing," she said. "The real picture does not become clear until the 7-day data is compiled. This will give a clearer guide on audience engagement.

"On social platforms, the show and its cast are making quite a lot of noise. It's a great cast and the evolution of the couples and their experiences make for good viewing on any platform. In the end, it's all about the storytelling."

It isn't the first time a Seven program with a similar format to its rivals has recorded disappointing ratings. Last year, the broadcaster dumped Australian Spartan from its Sunday night timeslot after it failed to make a splash. Seven acquired the rights to the format after the success of Australian Ninja Warrior.

However, programs with low ratings debuts have survived their first seasons in the past. Seven's Yummy Mummies was renewed for a second season despite what the network described as disappointing ratings because it was popular on streaming and social media. Nine's Love Island, too, was considered a ratings fizzle on traditional TV until it proved to be a hit on catch-up TV.

In 2017, Seven Year Switch – an earlier iteration of Super Switch – debuted with around 618,000 average viewers.

Super Switch airs on Seven at 7.30pm on Tuesdays and Wednesdays.