“Star Wars: The Rise of Skywalker” closes the book on the Skywalker Saga and marks the end of an era for Lucasfilm, the company that series creator George Lucas founded almost five decades ago. It also marks seven years under Disney, a period defined by big box-office successes, creative struggles, and a major role in shaping the company’s first streaming platform. With the company’s flagship franchise coming to an ostensible end with “The Rise of Skywalker,” the next stages in the billion-dollar film franchise should be wide open, yet its future may lay elsewhere.

After less than a month at the box office, the film is poised to lose its top slot to Sam Mendes’ original World War I epic, fresh off a Golden Globes win. There have been other misses, with the 2018 one-off “Solo” losing as much as $80 million. That’s got to be disconcerting for Disney, which is accustomed to making hundreds of millions in profits on the latest Marvel movie. And the revolving door of “Star Wars” directors turns the vision for the franchise’s future into an open question.

Here’s the tension: Lucasfilm executives say they’re moving away from trilogies — but that’s the only successful formula the franchise has ever known. The Marvel Cinematic Universe found its dominance with a strategy that extends far beyond potentially tired trilogies, with one-off superhero stories becoming an interconnected universe that includes, film, television, and a multitude of characters. It disregarded the old expectations of what a franchise can do, and what it looks like. Can “Star Wars” do that, too? 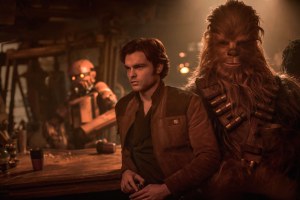 Right now, it’s not clear what the space opera can do. J.J. Abrams’ second entry in the “Star Wars” canon is a film that might be best remembered for its cultural schizophrenia: While the box-office returns for “The Rise of Skywalker” have been big, critics have never disliked “Star Wars” so much. Many slammed it as unimaginative and slavish in its fan service, although the fans are happy: While it has a 54 percent critical rating on Rotten Tomatoes, a historic low (even lower than the much-maligned prequels), 86 percent percent of viewers gave it a favorable rating.

And yet the audience response couldn’t stave off some unsettling after-effects: Disney stock hit a three-day losing streak as those critical reviews trickled out. And while the film made $175.5 million in its three-day debut, $200 million was expected. Those first-weekend box office returns for “The Rise of Skywalker” also placed it lower than its two predecessors, a shock considering that the film was designed to wrap up not only this latest trilogy, but also the nine-film franchise. There were other signs of percolating discontent: The film pulled a B+ CinemaScore, while “The Force Awakens” and “The Last Jedi” earned A ratings.

All of this was an about-face from “The Last Jedi,” which critics loved but made director Rian Johnson persona non grata among many “Star Wars” diehards who bristled at how Johnson upended expectations created in the first Disney-era installment, the Abrams-directed “The Force Awakens.”

Throughout the Disney era of “Star Wars,” there has been one major constant in Kathleen Kennedy, who was hand-chosen by Lucas to oversee Lucasfilm at the time of the $4 billion sale in 2012. “What we’ve been focused on these last five or six years is finishing that family saga around the Skywalkers,” Kennedy told the Los Angeles Times earlier this month. “Now is the time to start thinking about how to segue into something new and different.” 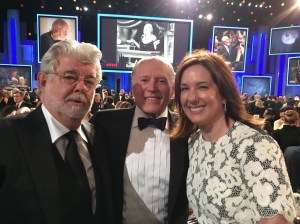 There have long been hints of what that “different” might be as Kennedy and company announced a slew of secretive new projects, but those have stalled out. Keeping filmmakers has been a pain point: Chris Lord and Phil Miller were fired from the standalone “Solo,” while Gareth Edwards was replaced by Tony Gilroy on the one-off “Rogue One.” Colin Trevorrow (“Jurassic World”) was initially set to direct “The Rise of Skywalker,” but Kennedy let him go in favor of returning Abrams to the fold.

Earlier this year, “Game of Thrones” showrunners David Benioff and D.B. Weiss dropped a planned “Star Wars” trilogy after signing a deal with Netflix. Kennedy, whose contract is up in 2021, later said that Lucasfilm would move away from trilogies in favor of movies shaped by stories, not structure — noting that while there is a rich “Star Wars” universe, there is no source material for future films. As of now, Lucasfilm doesn’t have another planned film release.

The May 2018 release of “Solo” marked the franchise’s first box-office disappointment with $392 million worldwide. Disney CEO Bob Iger blamed the performance on releasing too many movies too soon, but it also seemed to kill off hopes of reviving other beloved “Star Wars” characters for their own features, including Yoda, Obi-Wan Kenobi, or Boba Fett. 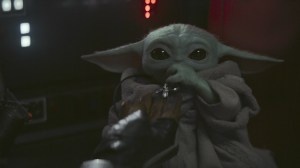 The Child, AKA Baby Yoda, in “The Mandalorian.”

Instead, those characters might find new life on the small screen. Disney earned a major win this fall when it launched “The Mandalorian” on its Disney+ streaming service. The series pleased critics and fans alike and achieved the kind of cultural cachet money can’t buy with the meme-ification of Baby Yoda. It helped make the launch of Disney+ a success and cemented the service as a destination for all things “Star Wars.” Next up: prequel star Ewan McGregor returns for an Obi-Wan Kenobi series, and Diego Luna’s popular “Rogue One” character Cassian Andor gets his own prequel series.

And with that, it may be that Disney finds the answer to “Star Wars” by looking within. “The Mandalorian” was created by Marvel multihyphenate Jon Favreau (with an assist from Lucas’ own protégé, Dave Filoni). Marvel chief Kevin Feige, who taught the world about stacking the calendar with superhero movies that connect as well as they stand on their own, is developing a new “Star Wars” film. With all that MCU energy, it’s possible that “Star Wars” could find success — or perhaps lose something in translation. But either way, it seems like “Star Wars” no longer has the luxury to figure this out on its own.