On Monday evening, BBC soap opera EastEnders returned to screens after being pulled off air last week following the announcement of Queen Elizabeth II’s death. Paying homage to Her Majesty, some of the characters from the iconic soap paid a heartfelt tribute to the Queen where they likened her death to Britain losing a member of their most beloved family.

The scene aired just before the opening credits, where characters Linda Carter (played by Kellie Bright), Denise Fox (Diane Parish) and Kathy Beale (Gillian Taylforth) were gathered around a picture of Her Majesty and were discussing her “selfless” life of service.

The trio discussed milestones including the Queen’s coronation in 1953 and her silver and Platinum Jubilees, with Kathy describing the send-off as “a classy way to say goodbye”.

As Linda, adjusted a picture of the Queen, Denise said: “God bless her, she’s been there our whole lives. It’s like she’s everything we’ve ever known.”

Kathy replied: “Just feels so personal though, doesn’t it? Just devastating,” before Denise added: “It’s like we’ve lost our nan.” 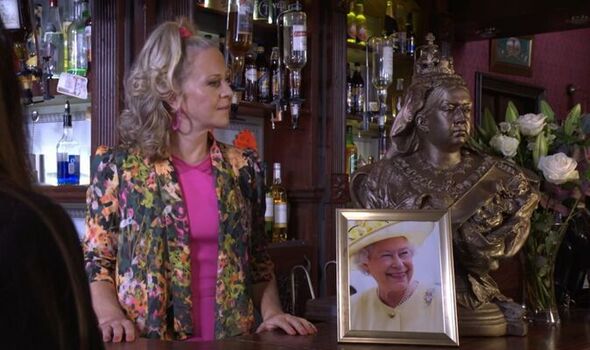 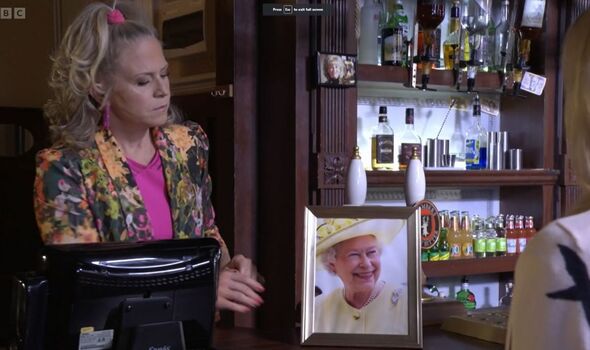 “Well, we have. I mean the country’s lost… we’ve all lost our nan. She dedicated her entire life to serving us,” Linda replied.

Proud to have experienced the Queen’s reign, Kathy simply put it: “Selfless.”

Denise added: “We’ll never see anyone like her again.”

Kathy began to recall the key moments she remembered vividly of the Queen’s seven-decade reign and admitted: “I was, what, three when she became Queen. 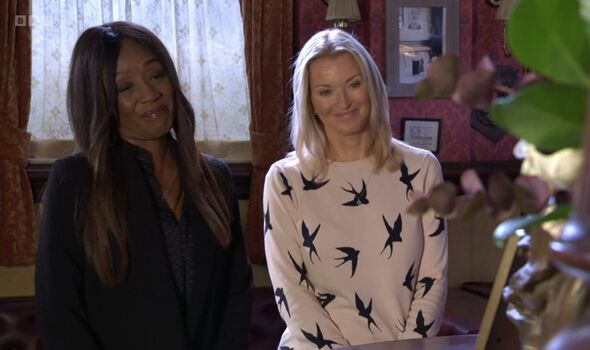 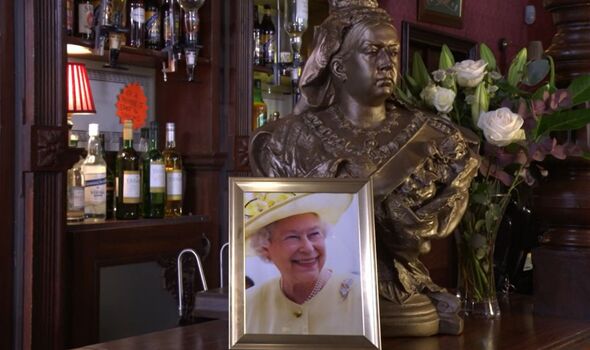 “I wish I could remember the coronation but, well, I’ve got other people’s memories.”

Kathy agreed: “Well that’s what she did, didn’t she, she made you feel so joyful and safe.”

They made a surprise visit to Walford where they were greeted by The Queen Vic royalty and Landlord Mick Carter (Danny Dyer) and were introduced to the residents.

Recalling the occasion in Monday’s episode, Linda said of the Queen: “Thank goodness she made it to the Platinum Jubilee this year. I mean what a classy way to say goodbye.”

Kathy exclaimed: “And what a day we had here, eh? We had Camilla and Prince Charles right here with us,” to which Denise corrected: “King Charles III.”

Together, the trio declare “long live the King”, before Linda continued: “We’ve got Kat and Phil’s wedding in here today and the show must go on.

“But first I’m nipping up Buckingham Palace to pay my respects,” with Denise adding that she was going to join her for the occasion.

The scene ended with Linda placing the Queen’s picture in front of a bust of Queen Victoria, saying: “Thank you, ma’am, from all of us. Look after her, won’t you?” she added addressing the bust.

The camera zoomed in and lingered on the photo before the famous opening credits rolled and the episode began.

EastEnders airs Monday-Friday from 7:30pm on BBC One.