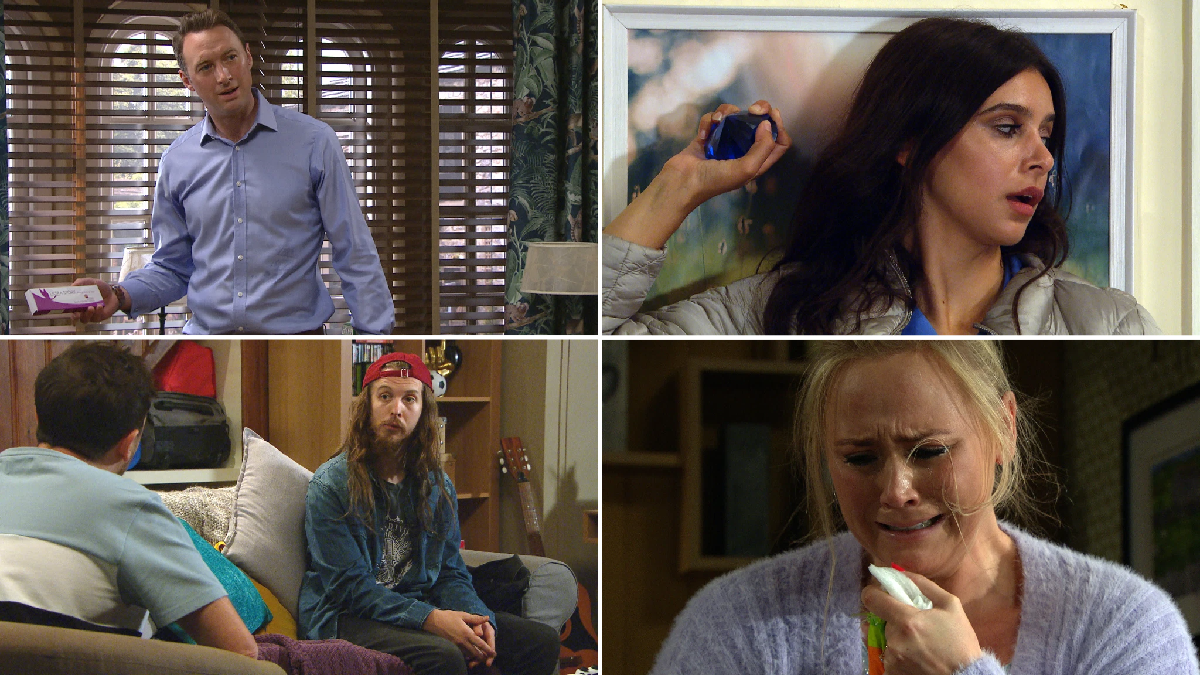 You might expect Autumn in Emmerdale to be a beautiful, peaceful and calm season.

The sunsets look stunning over the Dales, the village is full of autumnal colours and the air is fresh and crisp in the mornings…

Alright, we haven’t painted the most accurate picture of autumn in Emmerdale because in actual fact, this upcoming season will be full of trouble and drama as Meena (Paige Sandhu) puts another deadly plan into place, someone faces a new problem and a number of characters run the risk of their secrets being exposed.

So, what’s going on?

Tracy breaks down, but will she accept help?

One of the biggest stories in the opening weeks of autumn is that involving struggling new mum Tracy (Amy Walsh).

Still battling her PND, Tracy’s health will take a concerning turn when she tells a taxi driver, she’s leaving the village without Nate (Jurell Carter) and Frankie and never returning.

When a worried Faith (Sally Dexter) picks up on Tracy’s state of mind, she sets off to go and find her, and it isn’t long until she finds the mother paranoid and searching for her father’s tree.

Faith realises Tracy is suffering from post-natal depression, but will Tracy seek help?

Meena targets Vic again, but will she kill her?

Vic (Isabel Hodgins) and David’s (Matthew Wolfenden) chemistry has been something that’s bothered Meena for weeks.

After kidnapping Theo, Meena hoped it would’ve bene enough to ruin David’s friendship with Vic, however, things didn’t exactly go her way as viewers saw the two of them sharing another kiss.

Soon, after breaking into Vic’s house, Meena starts to mess with her belongings.

But when Vic arrives, Meena hides and grabs a paperweight, ready to use it.

Leanna (Mimi Slinger) lost her life when she got in the way of Meena’s plan, but could the same thing happen to Vic?

Moments after Meena breaks into Vic’s house, she arrives at the pub.

When David talks to Meena and tries to convince her to help Manpreet (Rebecca Sarker) following the news Aiesha is in hospital, he’s distracted when the paperweight from Vic’s falls out of her bag.

Can Meena cover her tracks?

Or could this be the start of David growing suspicious of his partner?

Liam (Jonny McPherson) made things clear to Leyla (Roxy Shahidi) that in order to move forward and heal, he’d need to live a life free from drama and surprises.

Which obviously came as awful timing for Leyla, who had just discovered her pregnancy.

Soon, Leyla will start to suspect she is having a miscarriage, but with her focus on protecting Liam, will she even tell her husband what she’s going through?

Could keeping this massive secret risk destroying their marriage for good?

Russ’ plan for Wendy and Vic

Evil Russ (Rob Jarvis) made his arrival to the village a few weeks ago, much to Wendy’s (Susan Cookson) horror.

Her former partner is in the Dales wanting money, specifically, the money his mother gave to Vic’s son Harry in her will.

Russ has made it perfectly clear that if he doesn’t get what he wants, Wendy and Vic will face the consequences.

This is a violent and dangerous man, but how far will he go?

Liv is helped by Laurel as her struggle continues

Poor Liv (Isobel Steele) has tried her very best to remain on the straight and narrow, but she hasn’t had an awful lot of luck.

Following the ordeal with Noah (Jack Downham), Liv is struggling with her recovery again, so Laurel (Charlotte Bellamy) offers her some encouragement.

But will it be enough?

Ultimately, the only person who can keep Liv free from alcohol is herself, but can she continue rehab to start living a better life again?

What’s next for Mack and Ryan?

Mack (Lawrence Robb) and Ryan (James Moore) have struck up quite the friendship since moving in together.

After Charity’s (Emma Atkins) confrontation, Mack has decided to hold back on involving Ryan in his dodgy crimes, but Ryan meanwhile, has other ideas.

Coming up in the Dales, Matty (Ash Palmisciano) finds Ryan’s counterfeit aftershave and confronts him about it, but could this lead to police involvement?

How will Mack feel if he’s inadvertently responsible for getting Ryan in trouble?