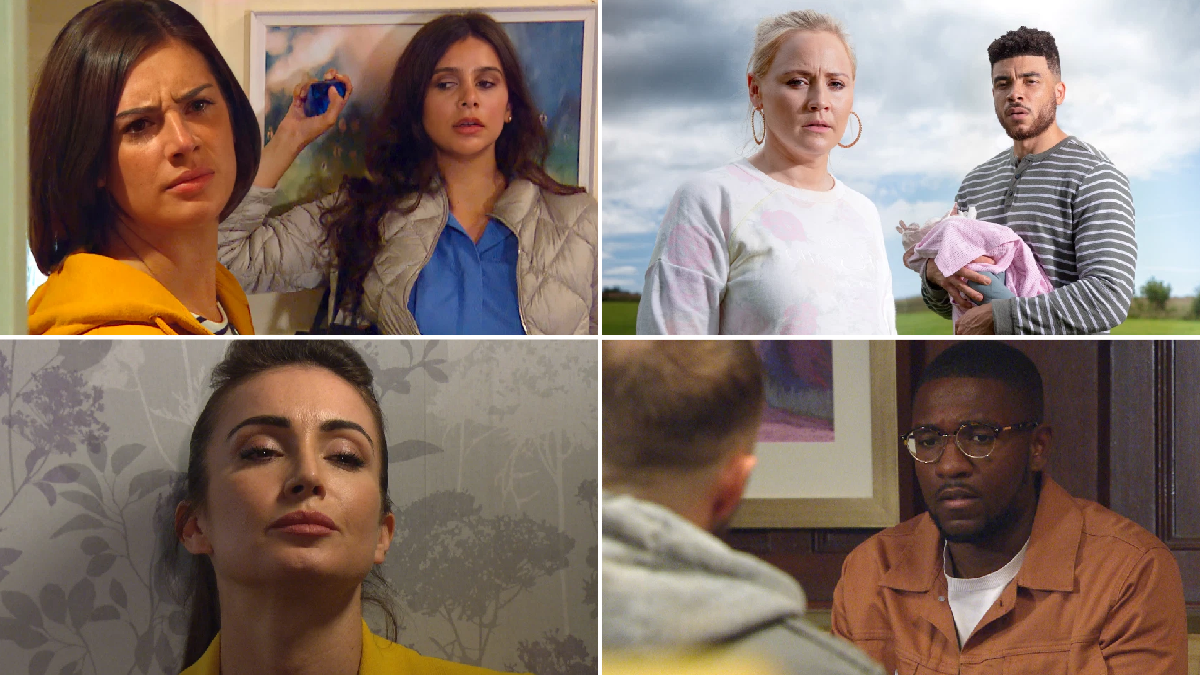 Emmerdale fans have long been wondering who would become Meena Jutla’s (Paige Sandhu) next victim, and it’s not looking too good for Victoria Barton (Isabel Hodgins)!

The serial killer gains entry to Victoria’s home in tense scenes next week, and starts to snoop, but she’s forced to take action when her nemesis returns home earlier than expected.

Meena reaches for a heavy paperweight, ready to attack, but is this truly curtains for Victoria?

Tracy Metcalfe (Amy Walsh), meanwhile, decides to leave the village, telling the taxi driver that she has no plans to return. Panic ensues when she doesn’t return home, but Faith Dingle (Sally Dexter) manages to track her down.

It’s a week that will change everything for many of the village’s finest, and here’s all you’ve got to look forward to!

Nate returns from work, while Tracy decides that she’s off out, explaining to Nate that she’s staying the night with Priya. As she leaves, she assures him that she loves both he and Frankie.

A taxi arrives at the bus stop to pick Tracy up and she tells the driver she’s not coming back.

Ethan confides in Amy, while Aaron apologises to Noah.

Nate is left in shock when he realises that Tracy didn’t stay at Priya’s last night. Faith, having discovered that Tracy is missing, joins the hunt and soon locates her amid a search for her dad’s tree.

Tracy can’t help revealing her delusions to Faith as she oscillates between severe paranoia and an eerie calm. Faith is convinced Tracy has post-natal depression.

Laurel notices how much Liv is struggling with her recovery and decides to offer her some words of encouragement.

Meena, meanwhile, has stolen a set of house keys from Amy, and when the coast is clear, she lets herself into Victoria’s home! She starts snooping and messing with her things, until she hears the front door open!

Victoria enters, and Meena grabs a nearby paperweight, readying herself to use it. The killer manages to stay out of sight, but her phone buzzes at just the wrong time, allowing Victoria to realises someone is in the house!

Manpreet explains to Meena that Aiesha has been taken into hospital in Ibiza and is in critical condition. The GP begs for Meena’s help, but Meena struggles to tear herself away from keeping an eye on David and Victoria.

Nate blames himself for what’s happened.

Ethan struggles to keep his emotions in check.

Matty finds Ryan’s counterfeit aftershave and confronts him on the matter.

Ethan is still privately worried that he might have HIV following his one-night stand with Eddy, particularly when Eddy gives him the news that his own results have confirmed he is HIV positive.

Charity’s interest is piqued, and she starts to suspect Matty and Ryan are up to something.

Leyla thinks she’s having a miscarriage, but her focus is on protecting Liam.

Charles queries what is wrong but Ethan covers that it’s work related. Will Ethan feel able to tell his father the truth over his worries?