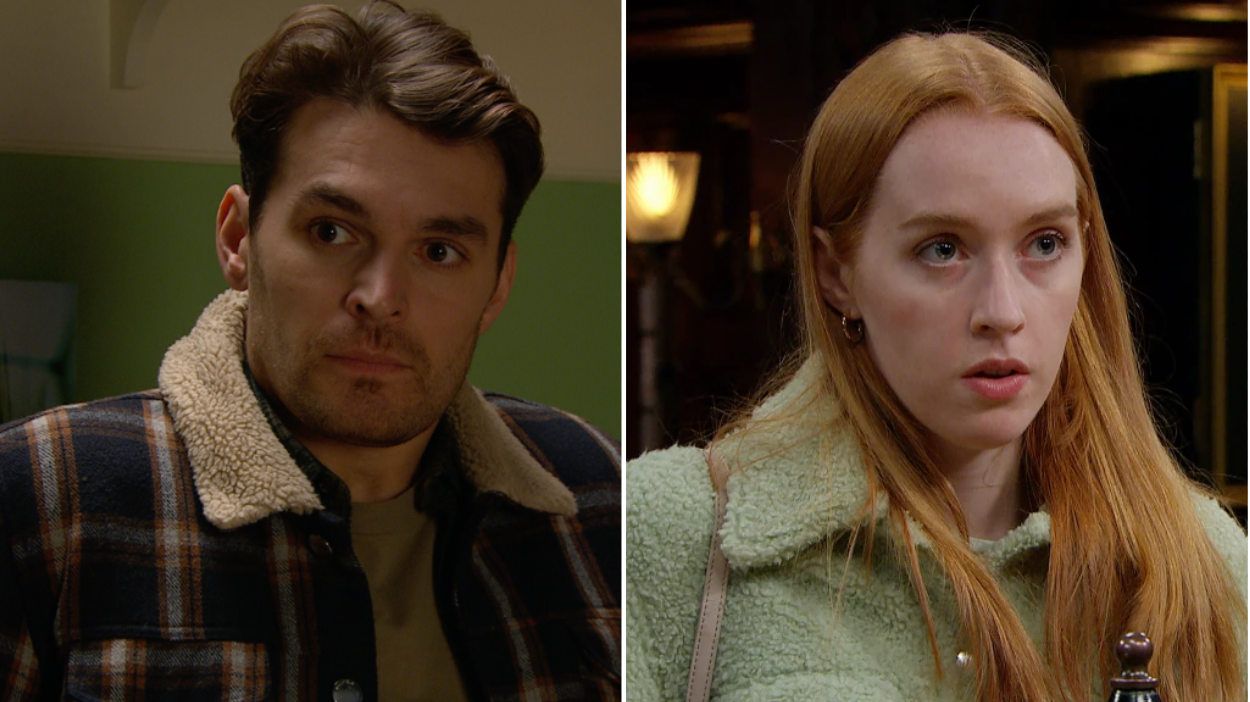 After Chloe Harris (Jessie Elland)’s one night stand with Mackenzie (Lawrence Robb) led to her becoming pregnant in Emmerdale, she found herself feeling very isolated after her mum Kerry (Laura Norton) decided to take a job on a cruise ship to nurse her heartbreak over the death of her fiancé Al (Michael Wildman).

Eventually she told Mackenzie about the baby and that he’s the father, while knowing that this is a far from ideal situation as Mack’s strongest impulse is to protect his relationship with Charity (Emma Atkins) at all costs.

Jessie Elland told us that Chloe has resigned herself to this situation. ‘I think she’s content to keep the paternity of her baby secret given the consequences she knows the truth will incur,’ she said.

This doesn’t mean that it’s easy for her, and Jessie thinks that Chloe would secretly welcome the situation being different.

‘As time goes on she definitely wishes that the circumstances were different,’ she said. ‘And although she makes her disdain for Mackenzie clear I think if he turned round and said he wanted to quash the secrecy and raise the baby together she wouldn’t say no; all she wants is to be wanted and have a family of her own.’

Upcoming episodes see a massive argument break out between Charity and Amy (Natalie Ann Jamieson) at Esther’s christening – which leads to Charity getting arrested.

Following this, Mackenzie tries to get Chloe to change her statement about what happened, and Jessie thinks that he uses the influence he has over her character in quite a manipulative way.

‘Family loyalty is a big part of all the villagers’ lives in Emmerdale and I think that’s what is at the root of the Christening drama,’ she explained. ‘You have two women, both very headstrong and feisty, each intent on defending their own respective families. Of course Charity in particular really relishes winding Amy up.

‘Most of the times we see Chloe and Mackenzie together she makes out to find him irritating and arrogant and isn’t a fan of his behaviour at all,’ she continued.

‘But a big chunk of that is a front and as much as she would hate to admit it she does actually listen to him. I think Mackenzie picks up on this and so knows how to say the exact thing that will get under Chloe’s skin and plant the seed of doubt in her mind. He basically amplifies the guilt she already feels and uses it as a way to get her to change her statement.’

As well as her feelings for Mack, Chloe is also harbouring strong feelings of guilt about Charity, and this is what Mackenzie is banking on. ‘Chloe is as loyal to Kerry as Amy but it complicates things for her now that Charity has become roped into the drama, and come out on the losing end, because she already feels so guilty about her implication with the baby,’ Jessie said.