Cain (played by Jeff Hordley) and his wife Moira Barton (Natalie J Robb) seem to have been getting on better over the past couple of years on Emmerdale as they seem to have put her affair with Nate Robinson (Jurell Carter) behind them. They were both eager to make Suzy (Martelle Edinborough) pay for playing a part in Holly Barton’s (Sophie Powles) death but after their initial anger, they have decided to take a more mature stance. However, in Monday night’s episode of the ITV soap, Cain and Suzy were finally working together and it seemed they made quite the team.

The latest instalment began with Leyla Harding (Roxy Shahidi) returning home after she suffered an overdose in last week’s episodes.

Things were frosty between her and her husband Liam Cavanagh (Jonny McPherson) as he wanted his wife to admit she was an addict.

Not wanting the businesswoman to have anything more to do with the world of drugs, Liam instructed Cain to get rid of the bag of drugs Callum (Tom Ashley) had forced Leyla to keep at the Take A Vow office.

He also wanted the bad boy to settle his wife’s debts with the drug dealer but knowing what was going to happen, Suzy wanted to help.

As she knew Callum from the past, Cain agreed to let her come along but he didn’t expect her to take charge of the situation. 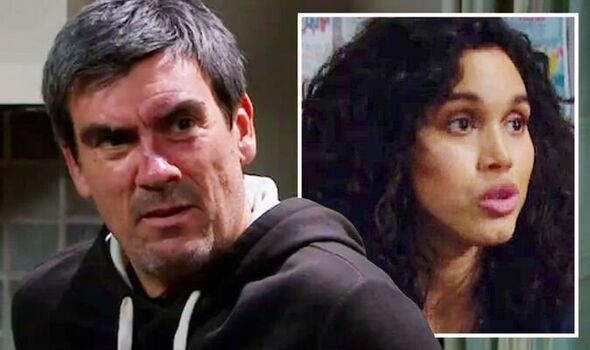 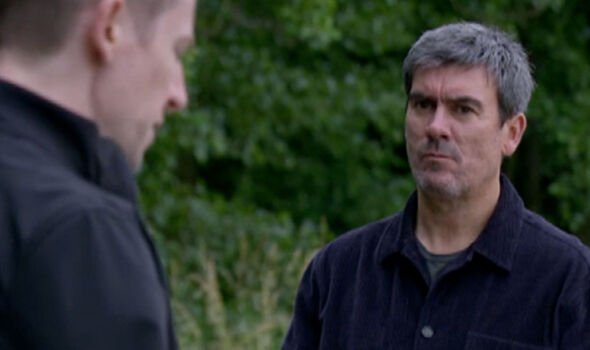 As Callum got out of his car, he said: “What are you doing with my stuff again? Hang about. Leyla’s meant to be looking after this, I don’t need all of it.

“People around here think they can play pass the parcel. It’s not a game,” he continued, with Suzy holding up an envelope full of money.

“That should cover what she owes you,” she explained, with the drug dealer asking where Leyla was as he wanted to see her in person.

“Recovering from a heart attack on your gear. So here’s what happens now. You don’t contact Leyla ever again, if she texts you, you ignore it.

“If she calls, you hang up,” she added, with Cain proceeding to get out of the car to make the situation more threatening. 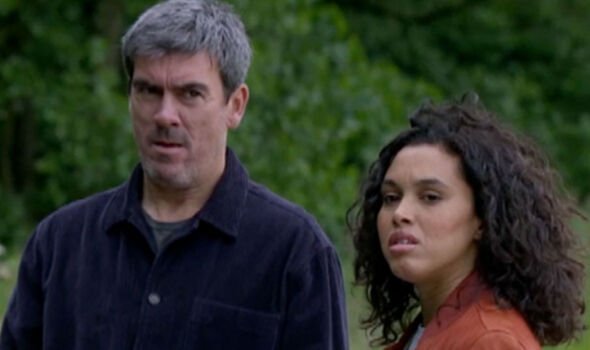 This doesn’t get back to Moira

Callum asked Suzy who Cain was but instead of answering him, she turned around to the bad boy and explained she had the situation in hand.

The drug dealer remarked: “I like Leyla but we were working on something. She’s got friends, associates, we were meant to be doing a bit of networking.

“Yes, well that’s changed,” Suzy replied, with Callum telling her his arrangement with Leyla meant he needed to be paid a lot more.

“The arrangement is over, or do you really need to hear it from my friend?” the businesswoman said as she turned to look at Cain again.

Once Callum was in his car, Cain told Suzy: “None of this gets back to Moira, ever.”

Suzy agreed and it seemed this partnership is going to be kept under the radar so Moira doesn’t realise her husband is working with the enemy.

However, what could happen is as Suzy feels her relationship with Vanessa Woodfield (Michelle Hardwick) is no longer going to continue, she could make eyes for someone else.

As she and Cain become the Bonnie and Clyde of the village, they could end up spending a lot more time together.

Naturally, they would start to develop a relationship but this could cross the line and they could end up becoming more romantic.

With Moira more concerned about keeping her son, Matty Barton (Ash Palmisciano), out of prison, she might not realise what’s happening under her nose.

But how will Moira react when she realises her husband is having an affair and will this end their marriage for good?

Following their reunion almost two years ago, the actor who plays Cain, Jeff, admitted he hoped the couple would stick together.

The soap star explained: “I’d love them to be back together as I Iove working with Natalie (J Robb).

“It’s similar to the Cain and Charity and Debbie thing – they’re always going to be bound by their child and they have to get on in some shape or form.

“They have to move forward as any parent does when a relationship breaks down and there are children involved. That’s where we will see how they cope with life apart but having to be tied by and sharing the childcare.”

The actress who plays Moira, Natalie, said: “It’s always up and down! The rollercoaster of love!

“Moira is clearly still madly in love with Cain and she knows that she made that awful mistake. I think she would just wish, even if they weren’t going to be together again, she’d love to know that Cain could forgive her for that.

“It’s still bubbling away, but it’s whether Cain can ever forgive her and whether they can find that closure.

“It’s still a rollercoaster and there’s always going to be things thrown at them. It’s whether they’ll come together or come apart with that, but we’ll see.”

Will another couple rip the couple apart for good?