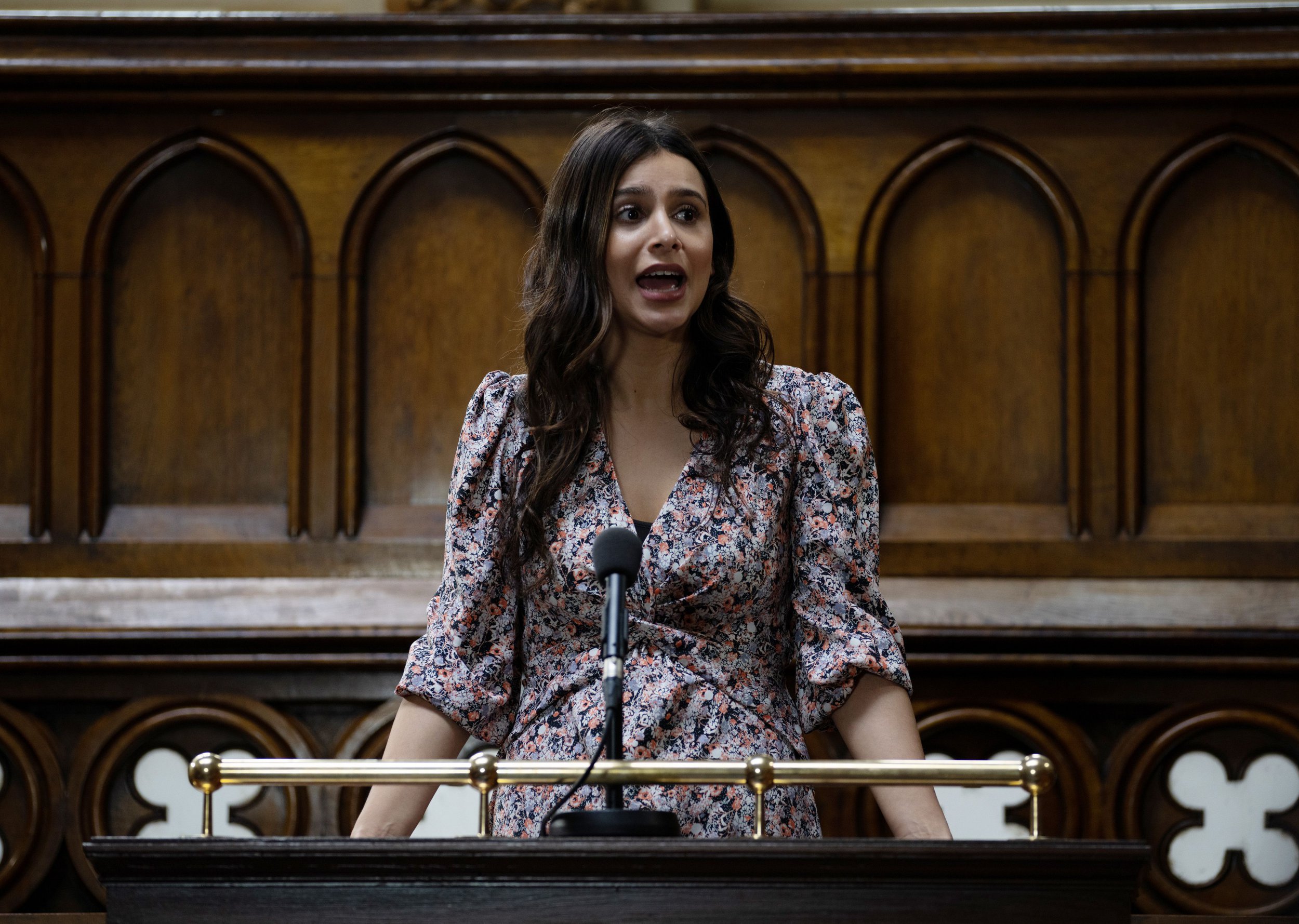 The deranged serial killer has seemingly taken delight in her ongoing murder trial – which will end tonight (April 14) in jaw-dropping and unmissable chaotic scenes.

Though her storyline is coming to a close now, it’s certainly been outrageous and will long be remembered.

But what’s happened since Meena first step foot in Emmerdale village in September 2020? Who has the character killed, and what’s been going on at her trial?

Let’s take a look back.

She meets Billy Fletcher (Jay Kontzle) and flirts with him, enraging Dawn Taylor (Olivia Bromley) enough to hit her over the head with a pepper shaker. Meena calls the police, and is warned to stay away from Billy.

We soon find out that Manpreet has purposefully cut Meena out of her life for sleeping with her first husband, Dennis.

Early hints of Meena’s true nature start to show in the first few months of her time in the village.

It becomes even clearer when she sets up Manpreet’s husband Rishi Sharma (Bhasker Patel) in a dangerous situation as he goes shopping for Christmas presents – changing his SatNav directions, hiding his medication and hiding Manpreet’s phone.

Lost for hours, Meena ‘finds’ Rishi and plays the part of hero for saving him, despite having caused the crisis on purpose.

Early 2021: Her dark side emerges more

She escapes getting caught after Ethan stopped texting his ‘mum’ of his own accord, and Charles admits that her supposed return has helped to bring him closer to his son.

In episodes aired in June 2021, Meena attempts to block Charles’ budding relationship with Andrea Tate (Anna Nightingale) – by locking her dog Princess in a car to stop them enjoying a holiday.

And in a touch of foreshadowing, it’s revealed that Meena had a friend named Nadine Butler – who supposedly died by suicide, but her death was actually labelled as ‘suspicious’.

The teen happens upon a box of items related to Meena’s crimes and manipulations, including a dog toy belonging to Princess and an article clipping about Nadine’s suspicious death.

Meena accidentally confesses to Leanna that she ‘didn’t mean’ to kill Nadine, before chasing her through a graveyard and ultimately throwing Leanna off a bridge.

But not before swiping the engagement ring off her lifeless body.

After she overhears Victoria confess her love for David and decides to break into her house – but, luckily for her, when Victoria arrives home, she doesn’t catch the identity of the robber.

And as she has to leave the village, she tells David she’s put a tracker app on his phone.

As David recovers from a shooting, Meena takes him off his painkillers and swaps them for paracetamol in order to keep him under her thumb, but Victoria grows suspicious.

A few weeks later, Meena overhears David tell Victoria he plans to leave her and get with Victoria while they are all taking part in an outdoor ‘survival adventure’.

This prompts Meena to tamper with Victoria’s abseiling harness – intending to kill her – though Manpreet picks it up by mistake.

She is unharmed, but not for long. Manpreet, Victoria and David are later in jeopardy when a bridge collapses beneath them. Meena seizes the opportunity of the deadly crash to try and drown Victoria.

Andrea sees the attempted murder, it is later uncovered, and Meena chases her and kills her to keep her secret from being unveiled.

She attempts to kill Priya Sharma (Fiona Wade) in hospital for possibly witnessing the crime, but ultimately does not.

Meena begins to date Billy, and attempts to make Dawn jealous by warning her to back off.

As the pair go on a date, Billy gets a call from Ben Tucker (Simon Lennon), who reveals he has found footage from the time of Andrea’s murder during the survival adventure.

Meena goes to check on Ben, who soon realises it is Meena who killed Andrea, and the two fight.

Ben almost escapes, as Meena slips on a drink and is unable to chase him, but Ben goes back to help her feeling badly for her, and as thanks she beats him to death with an oar.

Later, Liv Flaherty (Isobel Steele) is wrongly found guilty of the murder and sent to prison.

Throughout December’s episodes, Meena and Manpreet are at loggerheads.

After getting together with Charles, Manpreet wants to tell him the truth about Meena’s fake texts as Ethan’s mum. Meena beats her to the punch, telling the family it was Manpreet sending them.

Billy tries to leave Meena for Dawn, so she lies and tells him she’s pregnant. But he leaves anyway.

Christmas 2021 and January 2022: The Woolpack fire and Manpreet’s kidnapping

The tension between Meena and Manpreet reaches a fever pitch, with a fight in The Woolpack culminating in the former threatening the latter with a broken glass bottle.

However, the pub dramatically explodes before the fight can continue, which puts both sisters in the hospital.

Meena recovers, but Manpreet is kidnapped from hospital by her sister and held hostage in Dale View, later taking her to an abandoned barn – keeping her drugged on sleeping pills.

She also captures Vinny Dingle (Bradley Johnson). Planning to kill them both with carbon monoxide poisoning, she decides she wants Billy to die too – but while she stalls the plan, Liam Cavanagh (Jonny McPherson) realises Vinny is inside the barn and attacks her with a plank of wood.

Manpreet and Vinny are set free, and Meena manages to flee the police before they arrive.

Though she’s a wanted woman, Meena returns to Emmerdale from her life on the run in order to ruin Billy and Dawn’s nuptials.

She messes with Dawn in subtle ways in the lead-up to the Valentine’s Day ceremony, but ups the ante on the big day – by knocking Harriet Finch (Katherine Dow Blyton) unconscious, tying Billy up in the back of a limo and kidnapping Dawn from her big day.

Evil Meena gives Dawn the choice of who should die – her or Billy – but ultimately neither die. She does shoot Leyla Cavanagh (Roxy Shahidi) but she survives.

In the end, Liam pushes a gloating Meena off the same bridge where she killed his daughter Leanna.

Meena wakes up in hospital and is sent to prison, where she’s charged for her myriad and plentiful crimes.

She does still have a hold over sister Manpreet, who eventually tells her she’s finished with her – and stops coming to visit in prison.

In an episode airing on March 7, Meena pleads not guilty to the murders of Leanna, Andrea and Ben. But she does plead guilty to other crimes, including the kidnapping of Manpreet and Vinny.

Meena’s trial for the three murders has been taking place in April – and it’s certainly been eventful.

We’ve seen Meena flirt with security guards in prison as they handcuff her, and as expected, we’ve witnessed her try to charm and manipulate the jury into setting her free.

Both Manpreet and Liam give evidence against Meena in court, though the latter’s lawyer is ruthless with both of them.

Meena carefully rehearses what she’ll say when she takes the stand while sat in her cell, and also offensively claims that Leanna took her own life at the bridge that day.

Will she finally be found guilty of killing Leanna, Andrea and Ben? Or will she manage to get away with it? Unfortunately, we’ll just have to wait and see what the verdict is.