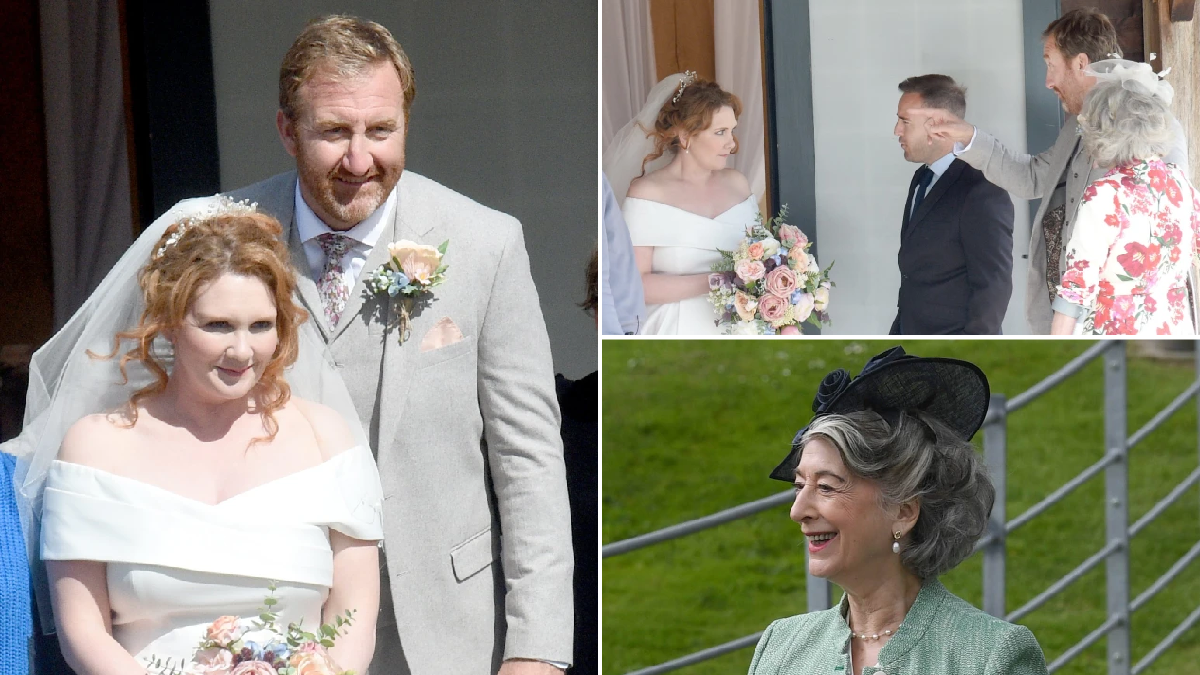 There’s nothing more dramatic than a soap wedding, and Fiz Stape and Phill Whittaker’s promises to be just that, with pictures from an on-location shoot giving us our first look at the upcoming Coronation Street scenes.

Several cast members of the ITV soap were spotted filming on-location for the ceremony, which will air in the coming weeks.

Other cast members in attendance at the shoot were Maureen Lipman, who plays Evelyn Plummer, as well as Maria Connor actress Samia Longchambon, and Dolly-Rose Campbell, who portrays Gemma Winter.

The big day is shaping up to be one to remember, that’s for sure, but the question is: will it all go to plan?

Will Fiz follow through and say: “I Do” to Phill? Or does her heart lie firmly with Tyrone Dobbs? That is the question, isn’t it?

Alan Halsall, who plays Tyrone, was was also pictured on-location, and things looked tense between Ty and Fiz at one point in a showdown outside the venue.

Will Tyrone perhaps confess his undying love for Fiz on the big day?

If so, will Fiz choose to be with him over Phill?

That remains to be seen.

It’s clear that Fiz has rediscovered some of her feelings for Ty in recent weeks, after it came to light that Phill had been looking into her ex, John Stape.

Tyrone, as viewers know, cheated on Fiz with Alina Pop (Ruxandra Porojnicu) last year, something which resulted in the end of their relationship, and a decision a came to regret.

Alan, however, reckons that Fiz and Tyrone belong together, despite their current split.

‘I think the one thing that Coronation Street has – above all other shows as far as I’m concerned – is history,’ he told Metro.co.uk last month.

Tyrone and Fiz have an unbelievable history, they’ve got years together, they’ve been through so many things together.

‘Of course there have been speed bumps along the way and most of those have been down to Tyrone and been his fault, but certainly this time I think he recognises what he’s done, what he’s lost.

‘He recognises that Fiz is his soulmate and I think he’s praying that she chooses him.’

But will Ty’s hopes and dreams come to pass?

Or will this wedding see Phill and Fiz well and truly cement (sorry) their future together?