From Melrose Place to morning TV: When mates become colleagues

In November of 2008, Michael Rowland and Lisa Millar each crossed live from the US to Melbourne, appearing on the debut episode of ABC News Breakfast. Barely 8000 people were watching. Now, the program is a serious contender, occasionally beating Nine’s* once-dominant Today in the major cities.

The pair have been friends since the mid-1990s, when they met at ABC’s Canberra bureau. 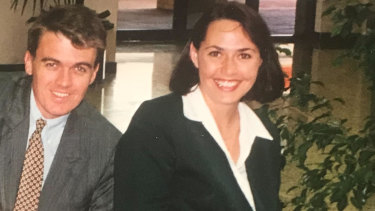 “I’ve got a really good feeling about Michael and I working together, because of our friendship,” Millar says.

“But the program’s already doing so well. I feel like I’m just waltzing in as it’s on the rise.”

“When [News Breakfast goes to air], America and Europe are still awake – and we can deliver that news as it breaks,” she says.

“But I’m still a country girl. I grew up in Kilkivan [in rural Queensland] and started my career at The Gympie Times. Last week, I drove 2000 kilometres from Townsville towards Mount Isa to do stories – and everyone there watches News Breakfast.

“We need to remind ourselves there is a massive country out there and they love the show.”

Millar will continue filming episodes of factual series Back Roads, which devotes each episode to a rural or regional community.

Millar has also worked at Brisbane tabloid The Sun and WIN TV in Townsville. She joined the ABC in 1993 as a North Queensland correspondent, then covered state and federal politics before hosting the Queensland edition of Stateline.

In 2005, she was part of a team that won the Walkley Award for Investigative Journalism.

“I don’t think there’s any job quite like News Breakfast,” Millar says. “You can be interviewing the prime minister one hour, and Leo Sayer or Jimmy Barnes the next.”

Millar’s father, Clarrie Millar, served as Wide Bay’s federal Country Party MP for 16 years. As a teenager, she travelled to Canberra to watch him in Parliament. It was there, the ABC reported, she met Richard Carleton, the late television reporter.

“If you’re going to be a journalist,” Carleton told her, “don't be a mediocre one. There's plenty of them around.”

*Nine is the owner of this masthead.