SPOILER ALERT: The story includes details about the April 1 episode of Grey’s Anatomy.

After a string of intense and heavy episodes marked by tragedy, including the deaths of DeLuca as well as Bailey’s mom, Grey’s Anatomy delivered a hopeful one-hour tonight. The biggest development came at the very end, when Meredith (Ellen Pompeo) was taken off the ventilator and was able to breathe on her own. She was “helped” by two old friends who tragically died nine years ago, her sister Lexie Grey (Chyler Leigh) and Mark Sloan (Eric Dane) who visited her on the beach and made the case why she needed to fight to live.

While Leigh’s return was revealed in the promo at the end of last episode, Dane’s appearance was kept a surprise as his Mark joined Meredith and Lexie on the beach. As the trio chatted, Mark shared that he talks to his daughter Sofia, as well as her moms, Callie and Arizona, all the time. Mark and Lexie also showed a lot of affection towards each other, and when Meredith asked if the two were still together, Mark said, “On your beach it looks like we are.”

'Grey's Anatomy': Another Beloved Character Makes A Return To The Beach

While Meredith kept saying how much she loves it on the beach, Lexie and Mark talked about what they miss about being alive and urged her to choose life. “Don’t waste one single minute,” Mark said in their final conversation before Meredith was taken out of the coma, possibly ending the season-long beach motif, conceived by showrunner Krista Vernoff, which also featured visits from Patrick Dempsey’s Derek Shepherd and T.R. Knight’s George O’Malley. 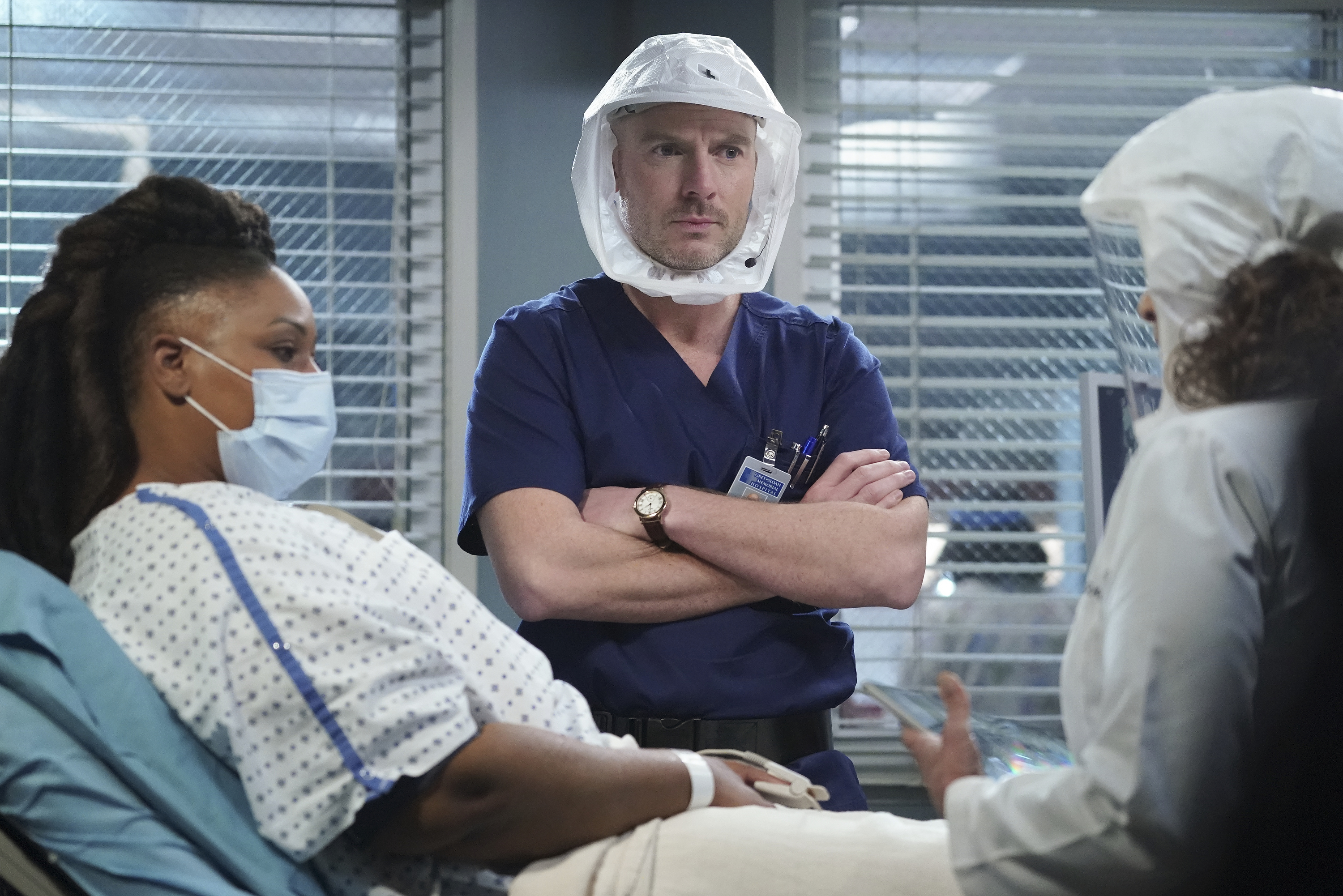 Elsewhere in the episode, there were positive developments all-around. The two main medical cases had happy endings, including one where the doctors at Grey Sloan Memorial faced a Sophie’s Choice situation with one ventilator left and a mother and her daughter both in desperate need to be intubated. Teddy was on the mend, Owen and Koracick almost reconciled. And, along with Meredith’s successful reentry after she was taken off the machine, Winston proposed to Maggie at the end of the episode, and she said yes.

In an interview with Deadline, Dane spoke about how his Grey’s return came about. He took us behind the scenes of filming the beach scenes with Pompeo and Leigh, sharing his take on Mark and Lexie’s relationship status and the duo’s pivotal role in giving Meredith strength to cling onto life when she is taken off the ventilator. He also discussed the remarkable longevity of Grey’s Anatomy and his return to production on his current series, HBO’s Euphoria.

DEADLINE: When and how did you get approached about returning to Grey’s Anatomy?

ERIC DANE: I was in Shanghai, filming a movie, a Chinese production for that market, a historical piece, and Krista reached out to me and said, “Hey, I’d like to talk to you about something, let me know when you have some time.” I said, “Well, I’m in Shanghai, China right now, let’s talk right when I get back.” I don’t remember the timeline; I know I was in Shanghai in August. She explained to me what was happening in the story, and she said, “We want to put Mark Sloan on the beach with Lexie Grey.”

DEADLINE: What was your reaction? Did you like the idea?

DEADLINE: What do you mean?

DANE: I mean, if you’re ever going to bring Mark Sloan back, I guess with Meredith in a coma, it’s a good way for her to see him. So, it wasn’t a tough sell, and it made sense. 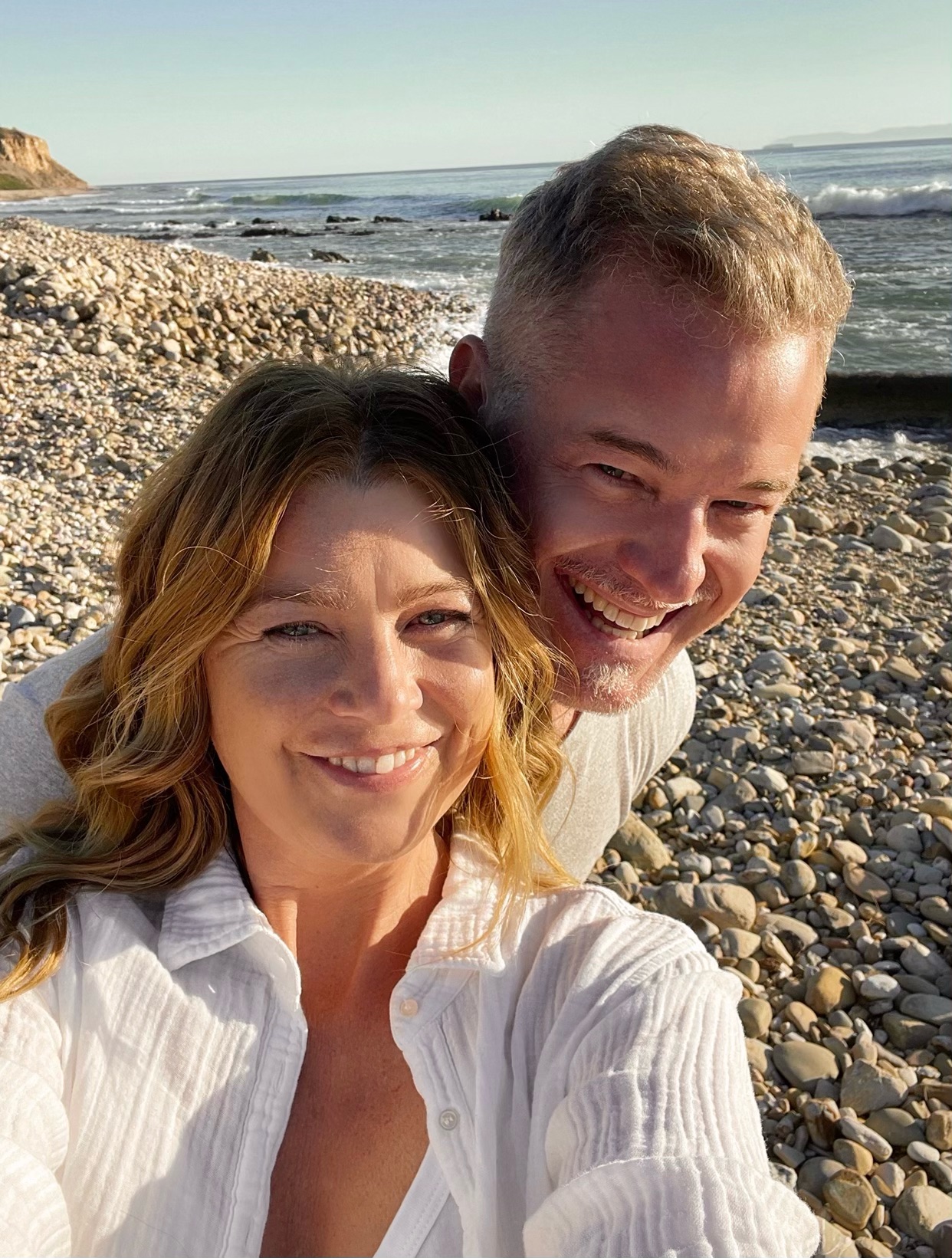 DEADLINE: Tell me about the filming of your scenes. You got to spend time with Ellen and Chyler, the crew. How was it going back into character, revisiting your past and reuniting with old friends?

DANE: It was like I’d never left. It was a great day at the beach. It was great to see some of the familiar faces and same crew members, and we didn’t skip a beat. I love those people. I spent a significant portion of my life with those people, I’d do just about anything for them.

DEADLINE: What did you, Ellen and Chyler chat about in-between takes?

DANE: Masks, Covid. I hadn’t seen Chyler in a while, but Ellen I stay in contact with, and just, how are the kids? Kids are good. Small talk. There wasn’t a lot of time in-between takes because of the protocols and how we had to set it up. So, once we got going, it was almost like a runaway train.

DEADLINE: And it was easy to go back into character?

DANE: Yeah. I mean, look, I created Mark Sloan. It was not that difficult for me to get back into character.

DEADLINE: What did you think about Mark and Lexie playing such an important role in giving Meredith a will to live and a reason to fight as she soon thereafter started to breathe on her own?

DANE: Well, Mark Sloan and Lexie Grey are embedded in the DNA of that show, and also literally, Lexie and Meredith share the same DNA. So, I think there’s a connectivity there and reminding her that, gone but not forgotten, we’re always around if you need us, and it’s too early for you to stay on the beach.

DEADLINE: And there was something comforting, I’m sure, in you reassuring fans that Mark is OK…

DANE: Sure. Absolutely. You see that everybody’s okay and happy; it allows you to want to come back for something.

DEADLINE: … And that Mark also is watching over his daughter.

DANE: Yeah. Whether she’s listening to me or not, you always have somebody looking over you. I lost my father at a very early age, and I feel like he’s watching over me in some capacity.

DEADLINE: When Meredith asked whether Mark and Lexie were together, you said “On your beach, we are”. What do you make of that? Does it mean that they’re happily together in our imagination?

DANE: I didn’t dig too deep into that. I sort of took it as like, not in your imagination but the way you’re seeing it in your subconsciousness, wherever you are right now, whatever state of being you’re existing in, in this coma, fever dream, whatever it is, I guess that’s [Meredith’s] projection of perfection. Mark and Lexie are together forever, and I’m sure Mark and Lexie aren’t too bummed about it either.

DEADLINE: What is your vision of Mark and Lexie, how you think that their story continues in the afterlife? 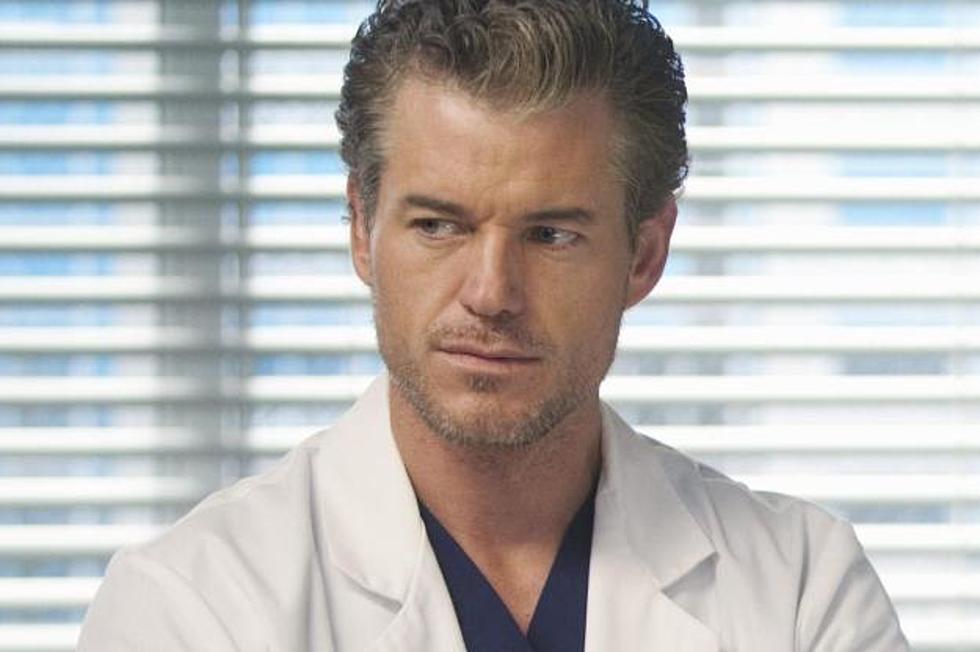 DANE: Well, I think there’s a lot of factors but at its core it’s just a great show. People connect with the characters on that show. It seemed to have found a whole new generation of viewership. Shows typically will grow up with a generation, an audience, and eventually that audience will either outgrow that show or move onto something else. But with Grey’s, there’s always been an alchemy in that cast, a dynamic, a chemistry which keeps people showing up. The writing’s good. Krista, Shonda [Rhimes], Betsy [Beers] and now Debbie Allen’s exec producing the show. They’re so good at understanding the tone of that show and finding characters that people will invest in, and what that translates to is Season 17.

DEADLINE: Is there anything you miss about Grey’s?

DANE: Well, I’ve maintained contact with a lot of the cast members. An answer somebody would give you, had they not, would’ve been I missed the people, but I’m still friends with all of them. So, there wasn’t really anything to miss.

DEADLINE: Are you going back into production on Euphoria soon?