Hit & Run Season 1 Finale Recap: Beware of Jackals at Night, and Where Is [Spoiler]? — Plus, Grade It!

We all know that espionage dramas rarely wrap up neatly and nicely. But that didn’t stop us from holding out hope for the Season 1 finale of Netflix’s Hit & Run.

And, for a brief moment in Episode 9, happiness seemed possible for Segev and his surviving loved ones. The Israeli mercenary-turned-tour guide got to Naomi just in time to stop a corrupt Mossad agent from taking her life. Sure, the double-crossing CIA boss killed the Mossad dude and then Segev and Naomi bested the CIA baddie, but a win is a win.

Segev handed Naomi Danielle’s notebook, which revealed that Israel had been spying on the POTUS, after they escaped and he told her to run the story now that she had the final piece she needed. Ever the inquisitive journalist, Naomi couldn’t leave without asking Segev why Danielle didn’t get out in time. Segev said Danielle stayed in Tel Aviv longer than she should’ve because she loved him and wanted them to be together. Awww.

His sweet moment of victory and closure proved short-lived, because while Segev did his hero thing in New York, things fell apart back home in Tel Aviv. Tali had tried to convince Segev’s ex-wife Shira that she and Ella weren’t safe. Tali said that all three of them (four if you count the baby in Tali’s belly) should leave the country until Segev returned safe and sound. But Shira didn’t want to hear it. 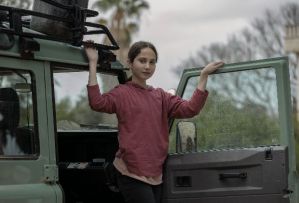 She said she was tired of running and even hiding out in the countryside was wearing on her and boring Ella. Besides, Shira argued, one of the reasons she divorced Segev is because he was always fighting “imaginary wars.” Tali, who had just fled the city in fear for her life, corrected Shira and said the spy war Segev had been fighting was anything but imaginary.

The two agreed to disagree for the time being, and Tali went to take a nap but said she would try and convince Shira again later that night. Before walking away, Ella mentioned to her cool cousin Tali that they had to lock up the sheep at night because otherwise, the jackals would get them. Can you say “symbolic foreshadowing”?

When Tali woke up, she whistled for Ella’s dog but couldn’t find him. She then checked Shira and Ella’s cabin and couldn’t find them, either, until she stumbled upon Shira’s dead body: Someone had shot her in the head.

Tali then searched for Ella but to no avail. The bad guys — either from the CIA or the Mossad — had presumably kidnapped Ella and now she was gone. But where? Tali called Segev, who hadn’t been answering his phone, but he picked up this time. She told Segev the news and he yelled “f–k” in response and took off running into a grim reality that undoubtedly includes a Season 2.

What did you think of the Season 1 finale of Hit & Run and the series as a whole? Are you excited about a possible follow-up season? Grade the finale and the series in our polls below and drop your thoughts in the comments.