Home » TV & Movies » How Much Is Bachelor Star Demi Burnett Worth?

How Much Is Bachelor Star Demi Burnett Worth?

Demi Burnett stole the hearts of viewers on Season 23 of “The Bachelor” when she vied for Colton Underwood’s final rose. The petite-framed firecracker quickly became a frontrunner on the series for her entertaining antics, hilarious jokes and, of course, her relatable and extremely empowering journey through sexuality and self-acceptance.

After Demi was sent home during Colton’s season, which aired from January to March 2019, her status as one of “The Bachelor” sweethearts earned her a spot on “Bachelor in Paradise.” During her time on the franchise spin-off that summer, Demi broke barriers by becoming the first contestant to have a same-sex storyline when she came out as sexually fluid, as Glamour reported. Though Demi’s time on “The Bachelor” came to an end following her stint on “Paradise,” the self-proclaimed “queer queen” (via The Hollywood Reporter) has not stepped back from the spotlight so much.

In fact, Demi’s following is stronger than ever. Whether she’s advertising the latest beauty trend on Instagram or rocking a lavish ensemble for a fashionable photoshoot, the Texas native is always keeping fans up to date with her personal and professional adventures. In April 2021, Demi strutted her stuff while walking the red carpet for one of the first times since the coronavirus pandemic. “Missed a fun lil carpet moment so much! Swipe for necklace details,” she wrote via Instagram. It seems Demi is one busy cwoman — but her bank account is not suffering because of it. To find out her net worth, keep scrolling! 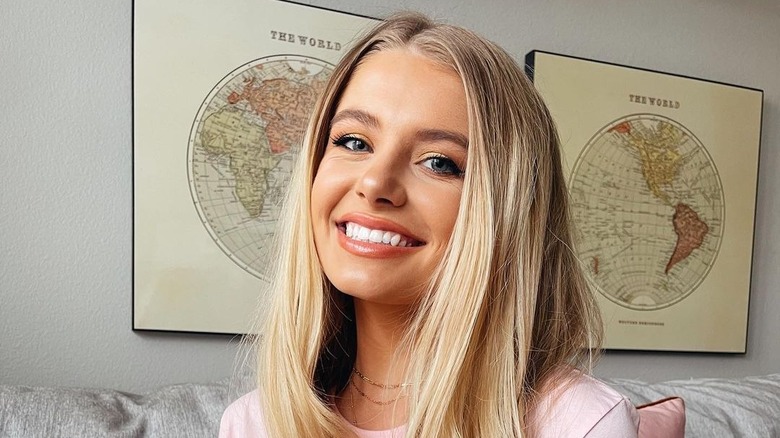 Demi Burnett has not made any regular TV appearances since her casting on “The Bachelor,” but the beloved beauty doesn’t need the recently-under-fire franchise to make a decent chunk of change. According to Gossip Gist, Demi has a net worth of about $1 million, and it’s thanks to her work on TV, as well as her growing career as a social media influencer and public figure.

Demi, who was born on February 21, 1995, and raised in Texas, has a pretty serious following of more than 1.2 million followers on Instagram. On her account, it’s common to find pics with “The Bachelor” BFFs like Onyeka Ehie, snapshots of her travels, and super cute selfies. Lucratively, Demi often posts promotional videos, and she has also done ad deals with companies like Bellesa, Bombay Hair, Saaya Rose, and UV Vodka, among countless others.

In addition to her social media fame, Demi launched her own podcast titled “Big Demi Energy with Demi Burnett” in April 2020. As the description states, Demi was “here to teach us that you don’t need the hardware to have true BDE with tons of great guests, piping hot tea, and plenty of laughter.” However, the last episode she uploaded to Apple Podcasts was in October 2020. Prior to becoming a TV personality, Demi was no stranger to making money. According to Gossip Gist, the bombshell became an interior designer after she graduated from Texas State University.

Bachelor, Demi, How, Is, much, Star
Celebrities