Ultimately David Geffen said it best and worst of Bill and Hillary Clinton: “Everybody in politics lies, but they do it with such ease, it’s troubling.”

Debuting on September 7, FX’s Impeachment: American Crime Story is an indictment of those lies, their corresponding hypocrisies and the people often treated as cannon fodder by the ruthlessly ambitious First Couple.

Penned by playwright Sarah Burgess and based on Jeffrey Toobin’s 1999 book A Vast Conspiracy, the latest 10-episode installment of the ACS franchise executive produced by Ryan Murphy, Nina Jacobson and Brad Simpson strives to keep the spotlight away from the Clintons. Instead, the focus is on the trials and tribulations of the once infamous Paula Jones, Linda Tripp and Monica Lewinsky, with the latter serving as a producer on the pandemic-delayed project.

The aim may be true in intent, but oddly Impeachment: American Crime Story misses the target more than it hits the bull’s eye. And, to lift some of Geffen’s cutting quote, it’s troubling.

For one thing, there’s a bit of untruth in advertising here. As manicured as you’d expect and more so, Impeachment: American Crime Story should truthfully be entitled The Vilification of Monica Lewinsky, because that’s what it is really about.

The forgone conclusion of the actual unsuccessful impeachment of Clinton in 1999 is at best an afterthought. Also, stepping aside for a second of who is the good girl and bad guys here in a story we think we know too well, it is the system under harsh scrutiny. Unfortunately, amidst the lies, lawyers, misogyny and conflicted portrait of Hillary Clinton, that cultural character often slithers away from the story as Impeachment plays name that 1990s trivia.

It’s worth noting that it’s not that the franchise has exhausted itself. Far from it, there are tons of great true-crime tabloid tales for Murphy and gang to gentrification — and I’m sure they will on FX, Netflix or somewhere else. Yet with the transitional Impeachment, the impetus that fueled 2016’s acclaimed The People v. O.J. Simpson has certainly waned 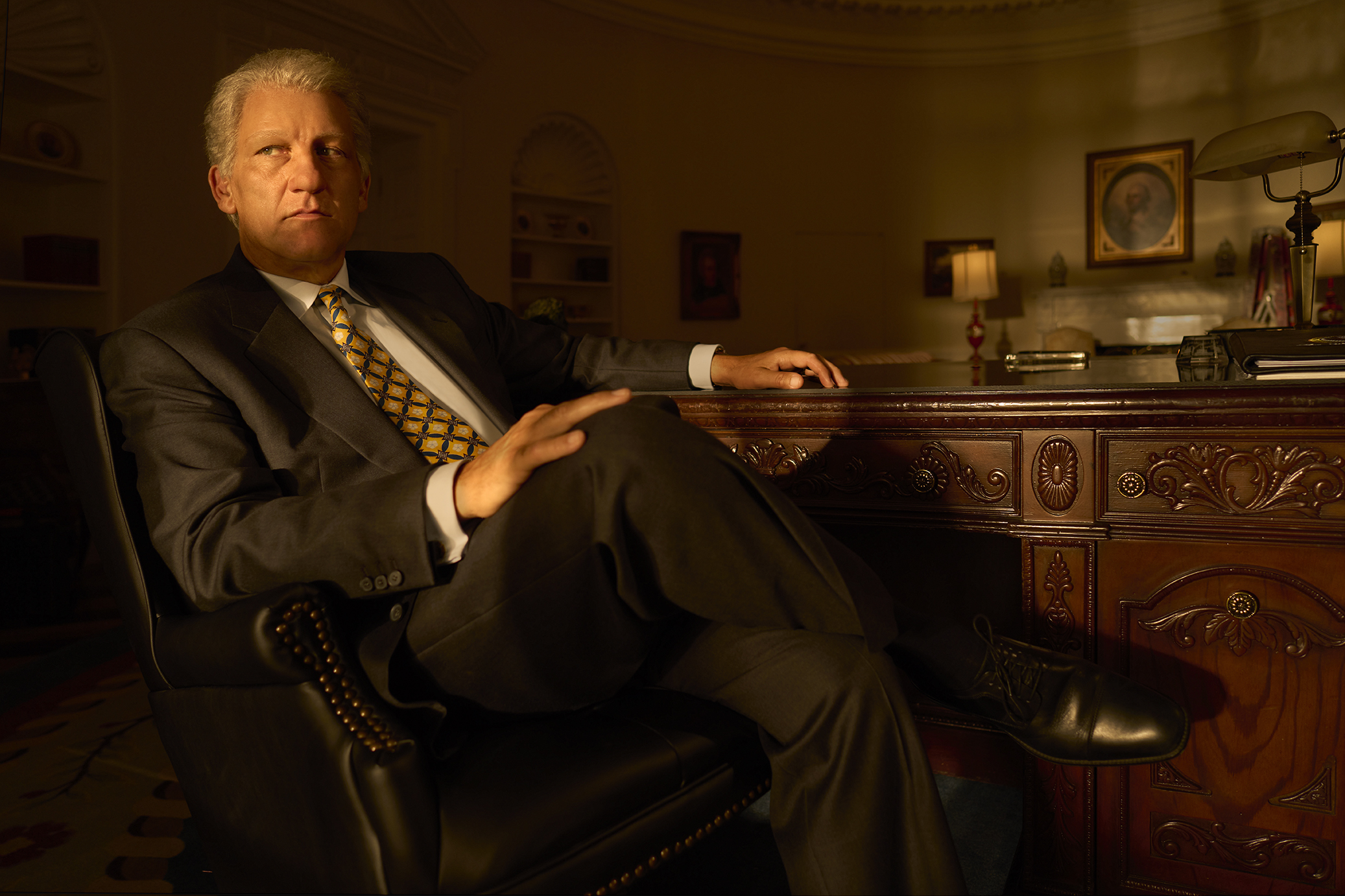 In that vein, Impeachment has much to be lauded for on the page and much to be laughed at on the screen — specifically Clive Owen’s terrible prosthetic transformation into a Bill Clinton best seen on Spitting Image, not premium cable. Here, a great actor was handed a great role and a curb-stomped face full of distractions.

Beyond the ghost in the machine that Owen’s frankly odious Clinton is for much of the series, this Impeachment is a toxic buddy miniseries of two very different women shunned and exiled by the White House for daring to assert themselves, albeit for very different reasons.

There already been much said about Paulson’s impressive physical transformation to portray the self-loathing and occasionally righteous Tripp. Much deserving said, but the thespian’s real star turn here with Burgess’ script is to flesh out Bush loyalist Tripp into so much more than the hateful caricature she quickly became and remained up until her death in 2020.

If Paulson transformed herself into Tripp, Beanie Feldstein channels producer Lewinsky in an almost uncanny manner that is a testament to the Booksmart alum’s talent and the advantage of having your now vastly and rightly reevaluated subject as a direct source and sounding board. 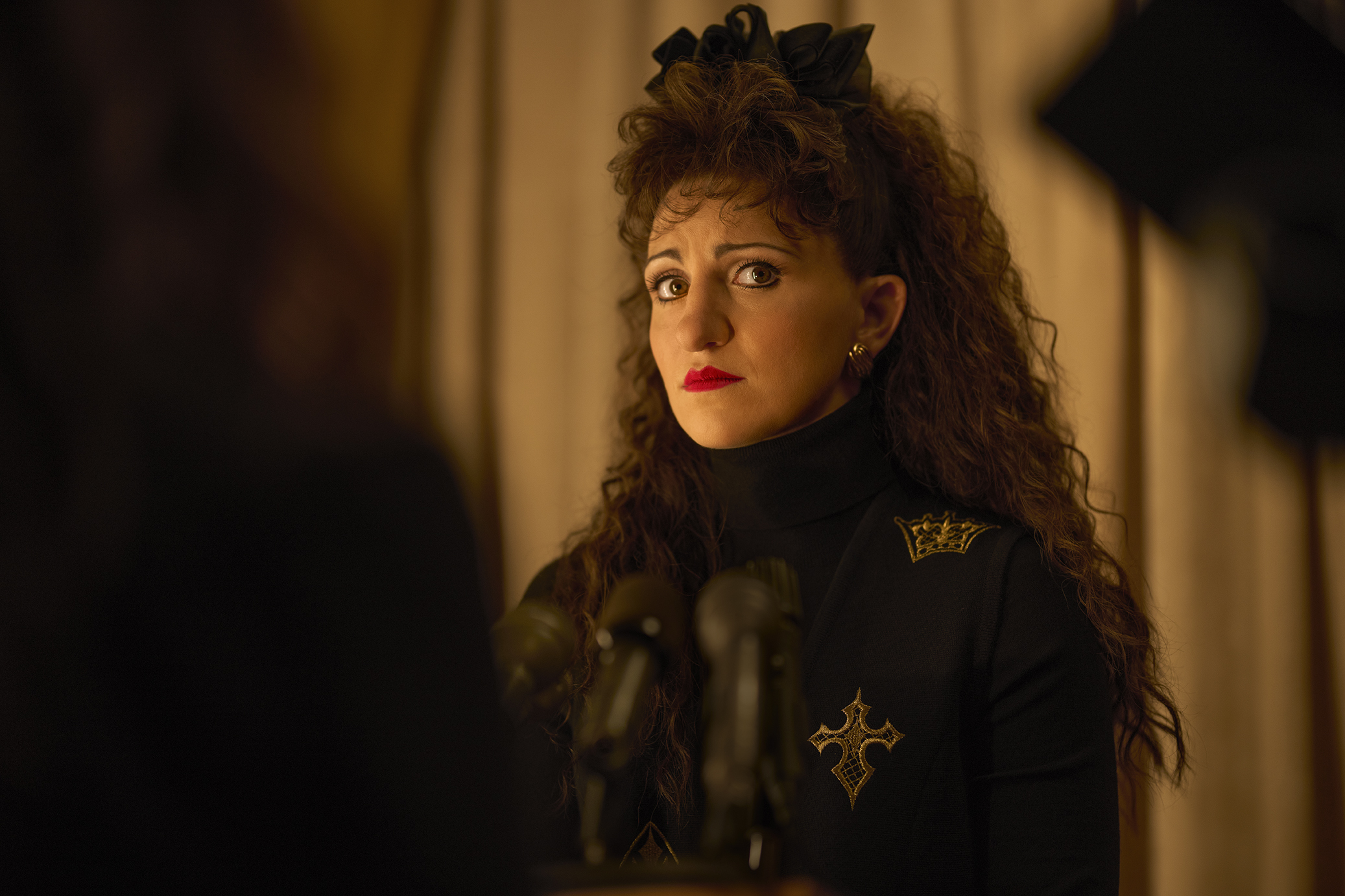 Serving as the foundation of the Clintons’ unraveling is Annaleigh Ashford’s Paula Jones. Spurred on by the alleged harassing power play by the then Arkansas governor in a Little Rock hotel room in 1991, Jones is manipulated by the men in her life for their own personal and professional desires. In that hurricane of lawsuits and Hail Marys, Tony winner Ashford is a calm center that deserved more both literally and figuratively.

Still, as has proven the case before in the ACS franchise, it is the almost anecdotal characters and cast that commend the chronicle.

Surrounded by the easily mockable antiques of pagers, brick-sized cell phones, AOL dial-up and revenge (which never goes out of style, digital or otherwise), the most intriguing support staff in Impeachment happen to be ones lunging right of center, if you know what I mean?

In all the Emmy nominations that Impeachment will surely be blessed with next year, don’t overlook Cobie Smulders as the contumely Ann Coulter, as the actress finds her stride inhabiting the ambitious provocateur in the years that Coulter found her conservative perch. The more we know now about the sanctimonious Ken Starr, Veep vet Dan Bakkedahl’s performance is a bit of a Beltway masterclass. And then there’s Billy Eichner as a swaggering Matt Drudge dominating a future that most of the other Impeachment characters don’t even know was already there in 1998. 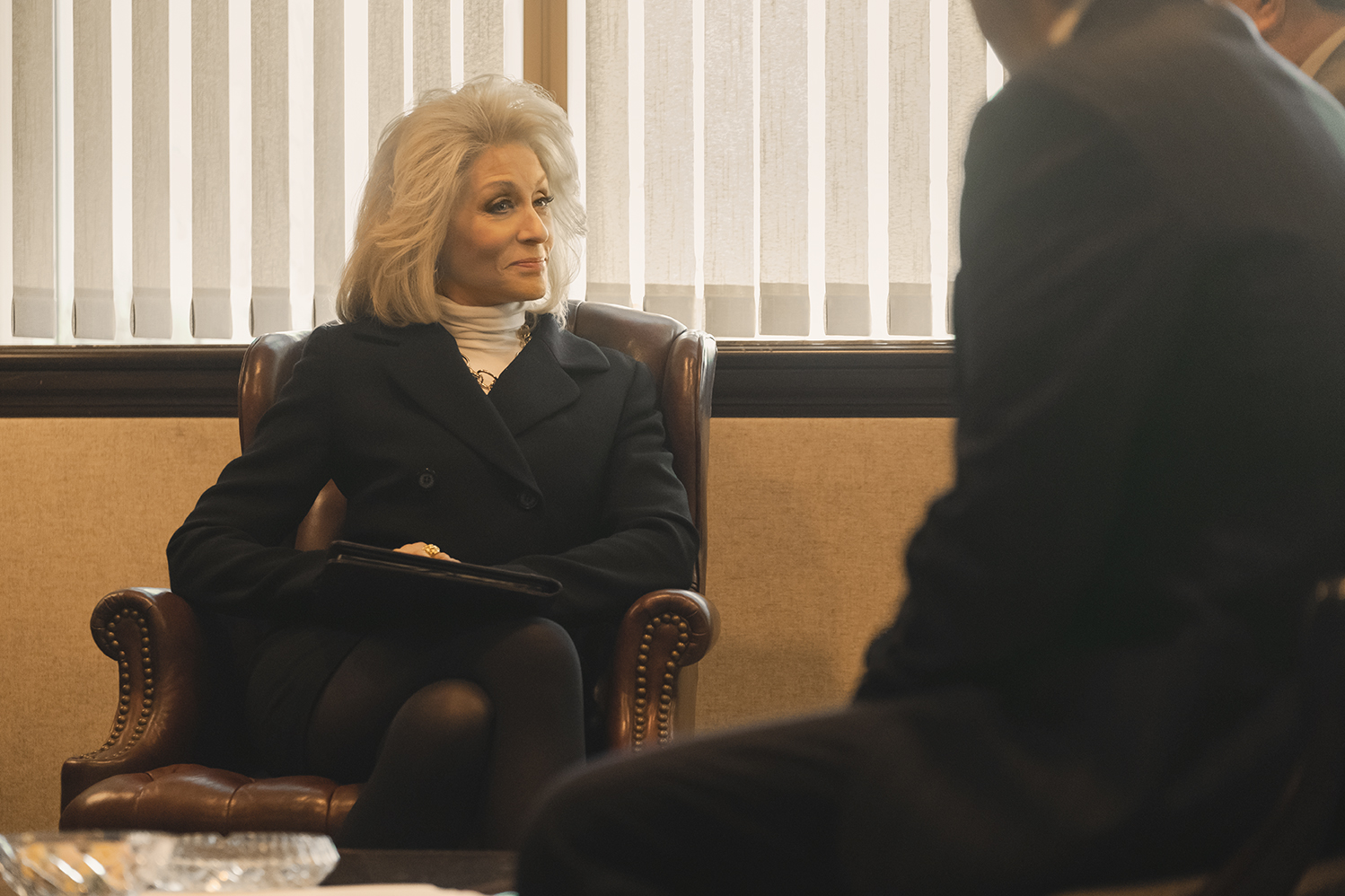 It goes without saying that Judith Light as ideological activist and Jones sidekick Susan Carpenter-McMillian is worth the price of your cable bill alone – though sadly it’ll be a while before Impeachment is bingeable thanks to an old deal FX inked with Netflix before the former was owned by Disney.

Despite the great turns by Paulson, Feldstein and Ashford, in many ways, the whole series, at least from the seven episodes I’ve seen, comes down to a near pre-dawn White House bedroom scene. Owen’s Bill Clinton wakes up Eddie Falco’s steel-jawed First Lady to tell her the story of his affair with then 23-year-old Lewinsky is breaking and that it is all BS, which we know is actually BS. 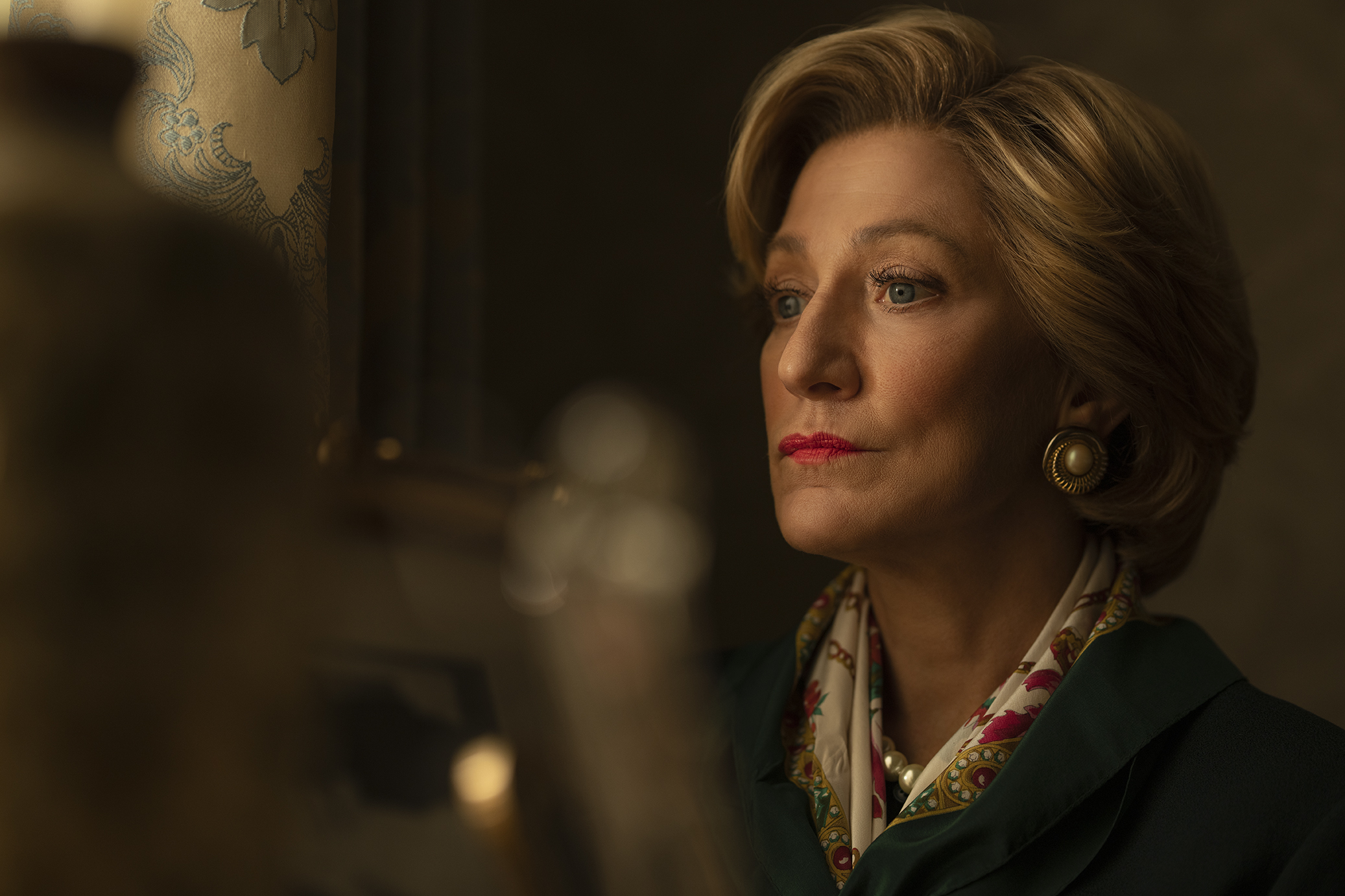 Constructed from various accounts, the conversation allows POTUS 42 numerous opportunities to admit the truth. Opportunities that show a couple determined to be honest with each other, whatever honest means to paraphrase Bill Clinton — which, of course, is the triumph and tragedy of the Clintons through numerous administrations and elections.

Just a few years ago, the former President anticipated he’d be celebrating 2021 as the beginning of another four years in the White House as Hilary’s second term kicked off. Instead, the once-popular two-term Democrat is a pariah in much of his party, a historical dead zone to much of the country.

As you watch his dirty laundry go through the spin cycle of FX’s Impeachment: American Crime Story, the fuller pivot to the then-First Couple leads to a cultural reckoning that has not changed that much from 1998, despite what many of us would hope. The sexist mocking of Lewinsky on the then-Jay Leno hosted Tonight Show, the stalker storyline pushed by Clinton loyalists, and the threats against Tripp and Jones are a hailstorm of hate that planted seeds now rooted in the America of 2021.

Or to put it another way, in this West Wing, almost everyone scurries and scowls surrounded by a defining darkness as opposed to walks and talks with drama.

Similar to The People v. O.J. Simpson, almost everyone who will be watching knows how Impeachment ostensibly ends, but there is much still to be written, nuanced and not, off the page. Perhaps as a Barack Obama-backing Ari Emanuel prophesied most succinctly back in 2008: “The real experience Hillary Clinton gained during her years in the White House has finally been revealed: She learned, just like her husband, how to manipulate words to cover up her lies.”

Only the final episodes will render that verdict, especially for the woman who wanted to be President.