Jamie Chung is back for another Big Hero 6 adventure with the third season of the Disney XD series, where she voices the intelligent engineer and athletic member of the superhero team GoGo Tomago. For the 37-year-old actress, the animated series — a continuation of the 2014 film — is an example of diverse and inclusive storytelling in top form.

“What’s rare is that you get a season 3 of anything, but to have a season 3 with a cast that you love and with a character that you know so well — and to be able to expand these storylines and really, really get to know each character’s very private lives — is so rare and has been such a joy and delight and really quite comical. You literally see our main hero, Hiro, grow up on-screen and also off-screen,” Chung told ET while promoting the new season of Big Hero 6: The Series.

Chung is no stranger to playing familiar roles, such as Mulan on Once Upon a Time, but as she opens up, there was a time in the early part of her career when she was settling for archetypal Asian characters (“It’s one Asian versus no Asians,” she recalled justifying then). The actress, who also appears on HBO’s Lovecraft Country (go here for more), recently hopped on Zoom to chat with ET about voicing GoGo, how quarantine has strengthened her marriage to actor-musician Bryan Greenberg and why she’s no longer interested in taking on “token Asian” roles.

ET: What about this project has been fulfilling for you creatively?

Jamie Chung: Creatively, you don’t know what they’re going to throw at you. Our executive producers, Mark [McCorkle] and Bob [Schooley], they’ve been in the business forever. They’ve been on animation since 1990 and they know the creatives of what we’re doing this episode. You don’t know what you’re going to get and then through season 3, they’re like, “Oh, Jamie, by the way, you have an episode where you’re singing.” I’m like, “What? GoGo doesn’t sing. That is not GoGo.” And, and they’re like, “No, GoGo goes to a classroom and she sings about dark matter.” And I’m like, “Oh god. OK.” So my husband luckily is a great musician and he was like, “I’ll help you.” I was like, “Please! I need the help.” You’re just sweating bullets going into this recording session knowing that you have to sing your heart out. But thankfully they hired a composer and they hired a voice coach and there’s autotune. So all is well. No one wants you to not succeed. Everyone wants you to succeed. Great thing I have a great support system.

Was this one of your first times singing in anything?

Yes! (Chung also sings in a recent episode of HBO’s Lovecraft Country.) What was great is I was able to do it as my character. Nothing really fazes her. So that was easier to do, but it’s so fun. We have one episode where it’s all about Mochi, the cat, and how he hates going to the vet and the mission is to save the cat or you have Karmi that was also featured in season 2 and she has the biggest crush on Hiro. For you to see their relationship kind of blossom, but then you also have the fan fiction. And whenever there’s fan fiction, we go into this different cartoon style where Big Hero 6 is Big TB 6. Everything is just so cute. I love it. I really hope that we get a season 4.

It helps when you’re a fan of what you’re in.

I keep watching because you do these recordings six months prior and a year will pass by and you finally get to see the final product and you’re like, “Oh my god, I forgot we did that episode!” “Oh, it turned out so great.” It’s really incredible what our animators and what our storytellers cook up. 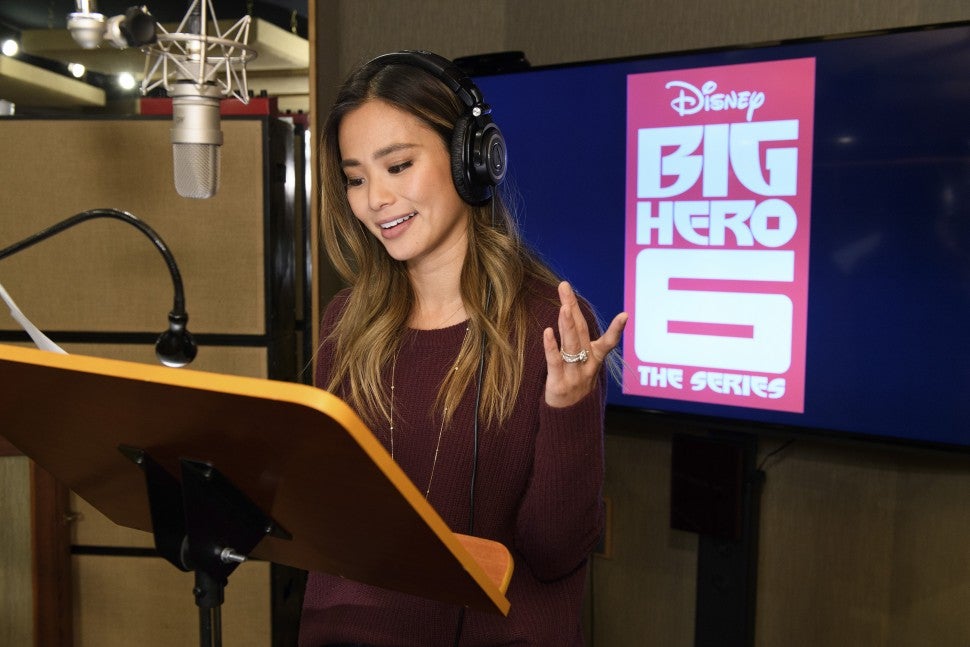 As an American-born Chinese from San Francisco, Big Hero 6 hits differently to me because of the images it put on screen. What has been impactful to you being part of this franchise?

It’s a true depiction of what San Francisco looks like; I’m born and raised in San Francisco. What I love about Disney is that they’ve always been on the forefront and they’ve always been pushing boundaries of being inclusive. That’s their thing, and that’s why I’m so proud of this show because it’s so multicultural and you get those layers and you see it on screen and you see the stories play out — whether it’s through food or the background stories. It’s like you get a taste of all of that and it makes you proud to be a part of something like that.

In this time of lockdown, the more I’ve talked to people, many have been looking inward a lot. Have you found yourself doing the same?

I had so much time to dwell and to self-improve. We thought it was only going to last for seven weeks and here we are months later, but it’s taught me a lot and I think you’re forced to address a lot of issues that you’re like, “No, I don’t need to worry about that right now.” “I don’t need to try to improve myself in that category.” “No, I’ll just think about it later.” And it really forces you to sit down and address a lot of — not your demons, per se — but a lot of things that you can fix about yourself. I think it’s really helped my marriage. I’m often in a different city doing work and it’s like, “We’ll figure that out later. That’s a conversation we’ll have later.” But we’ve worked through a lot of stuff and it’s made our marriage stronger. In a way, I’m grateful that we had this time together.

As an Asian American performer, what have you been moved by in regard to the storytelling that you’re seeing as of late and what do you still think needs to be done for this not to be a talking point?

I think it’s creating more content that’s inclusive. Disney is a great example of [a company] who’s always, like I said before, inclusive. Now they’re doing a movie with specifically Southeast Asian actors and that storyline [with 2021’s Raya and the Last Dragon]. And then we have the first Filipino animation [with 2019’s short film Float]. That’s what we need. We need more stories that’s more specific versus, “OK, we have an Asian character.” I fell victim to being the token Asian when I first started out in my career and the reason why I felt it was OK was because it’s one Asian versus no Asians. And now it’s not enough for me just to be a token Asian character. I want to know more about that character. I want to hear their stories, their specific background stories, their specific life experiences and how they became that person today. What it’s like to be an Asian American living in the States, you know what I mean? We need more stories like that and I think you’re seeing it. I think people are really taking the bait and giving these storytellers a chance to tell their stories but it’s happening. It’s not happening fast enough, but it’s certainly changing.

To stay up to date on breaking TV news, sign up for ET’s daily newsletter.