'Jeopardy: The Greatest of All Time' Tops 15 Million Viewers on Night 3

Primetime tournament grows overall audience, but ticks down another one-tenth of a Nielsen point in key demo ratings 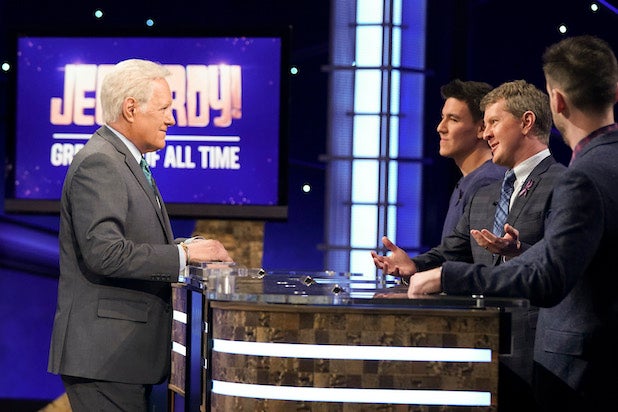 Answer: This primetime special topped 15 million viewers on Thursday. Question: What is ABC’s “Jeopardy: The Greatest of All Time?”

“Jeopardy: GOAT” grew its overall audience again on Night 3. The tournament ticked down another one-tenth of a Nielsen ratings point in total viewers, however.

No worries, ABC still handily won the night, more than doubling its closest competition in both metrics.

ABC was first in ratings with a 1.5 rating in the advertiser-coveted 18-49 demographic and in total viewers with an average of 9.3 million, according to preliminary numbers. The “Jeopardy” special at 8 p.m. posted a 2.2 rating and 15.4 million viewers. “Truth & Lies: The Jeffrey Epstein Story” from 9 to 11 averaged a 1.1 and 6.2 million viewers.

Fox was second in ratings with a 0.7 and third in viewers with 4.2 million. Two “Last Man Standing” episodes in a row in the 8 o’clock hour received 0.8s and averages of 4.4 million viewers. “Deputy” at 9 got a 0.7 and 4 million viewers.

CBS and NBC tied for third in ratings, both with a 0.6. CBS was second in viewers with 4.9 million, NBC was fourth with 2.7 million.

Sometimes, game shows are at their best when things don’t go according to plan