Joy-Anna Duggar slammed for kids not wearing coats, how she is holding Evelyn Mae

Joy-Anna Duggar has come under fire after sharing two photos of her family on Sunday.

She was posing with Austin Forsyth and their children, and there was one photo of just her with Gideon and Evelyn Mae as well.

Why was Joy-Anna Duggar called out?

In the photos shared on Instagram, several Counting On followers called out the reality star and her husband. It appears that Joy-Anna Duggar is barely able to hold on to Evelyn Mae, which was noted.

There was also some question about why Austin Forsyth was wearing a coat and no one else was. Evelyn Mae was born just six weeks ago, so she is still little. Gideon was dressed in a long-sleeve shirt, but without a jacket as well.

One Counting On fan said, “She look like she’s about to drop that kid 😂.” Another commented underneath saying, “right! And Austin has on a coat and the baby doesn’t even have anything on her head and Gideon doesn’t even have a light jacket on🤷‍♀️.”

Needless to say, several of the comments following that continued to rip Joy-Anna Duggar to shreds for the kids’ appearance, and the way she was holding her newly-born infant daughter.

This isn’t the first time Joy-Anna has been called out for her parenting choices. It is just another one to add to the growing list of gripes Counting On fans have about the young mom and her family. 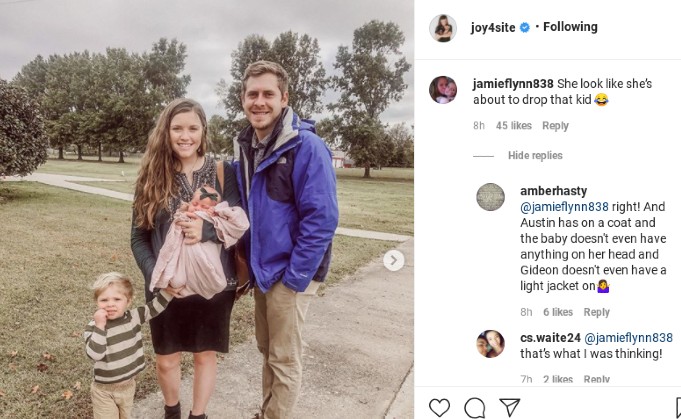 Austin Forsyth revealed later in the day that the family was headed to Alabama. He shared photos on his Instagram account of everyone in the plane, also revealing that Joy-Anna Duggar wasn’t able to keep her lunch down and got sick from the turbulent flight.

Flying to Alabama!✈️ This is Evy’s first flight! It’s been a little turbulent and my wife may or may not have lost her lunch!🤢

Flying to Alabama!✈️ This is Evy’s first flight! It’s been a little turbulent and my wife may or may not have lost her lunch!🤢

The family attended church on Sunday before heading to Alabama, which is why Joy-Anna Duggar shared the photos. Unfortunately, they caused quite a commotion in the comment section. There were a few comments about how awesome she looked for being six-weeks postpartum, but many were concerned over how she was holding Evelyn Mae and the children’s clothing.

Living life in the public eye has it’s positives and negatives, and this was just one of the not-so-great moments for Joy-Anna Duggar.

Counting On is currently on hiatus.