Kate Winslet and Guy Pearce on Reuniting for 'Mare of Easttown'

Winslet plays the titular character, Mare, a small-town detective investigating a local murder, while Pearce plays a local creative writing professor who seems to connect with Mare over some personal turmoil in her life. As Pearce told ET, it didn’t take much to convince him to jump on board for the project.

“To have Kate call me and say, ‘I’m doing a show. You have to come and play this role. This is the story. This is the connection between the two characters. Let me explain it all to you,’ I just go, ‘Well, yes,'” Pearce told ET over the phone, adding that he had a similar reaction to working with Winslet the first time, on Mildred Pierce. “I’m like, ‘Say yes. Just say yes.'” 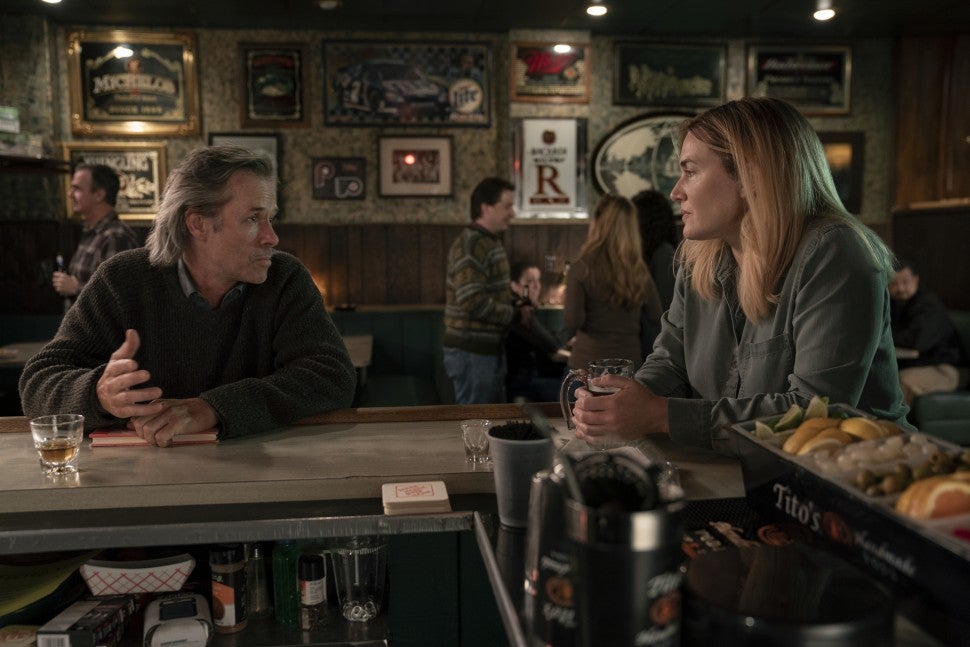 “Guy was my childhood crush,” the actress confessed to ET’s Rachel Smith. “He was in a show called Neighbours, and I was completely obsessed with him from the age of 11 years old to the point I would skip school so I could watch the midday edition as well as the repeat at 5:30.”

“It was that bad, and so when I did work with Guy in 2010 on Mildred Pierce, I had to come clean about all of this,” she explained. “I had to say, ‘Look, I’ve been in love with you since I was 11. And we share the same birthday, which I’ve also known since I was 11 years old.'”

So, since that confession, Winslet and Pearce have celebrated their birthdays together — sometimes with an email, and sometimes in person, like when they were shooting Mare of Easttown.

Pearce’s first day on set was in March 2020, just before everything shut down following the coronavirus outbreak. “They drove me to set… and [executive producer] Brad [Ingelsby] was the first person I met as I got out of the car. And he said, ‘Hey, guys, welcome to filming. This is fantastic. Just to let you know, we’re shutting down,'” he recalled. 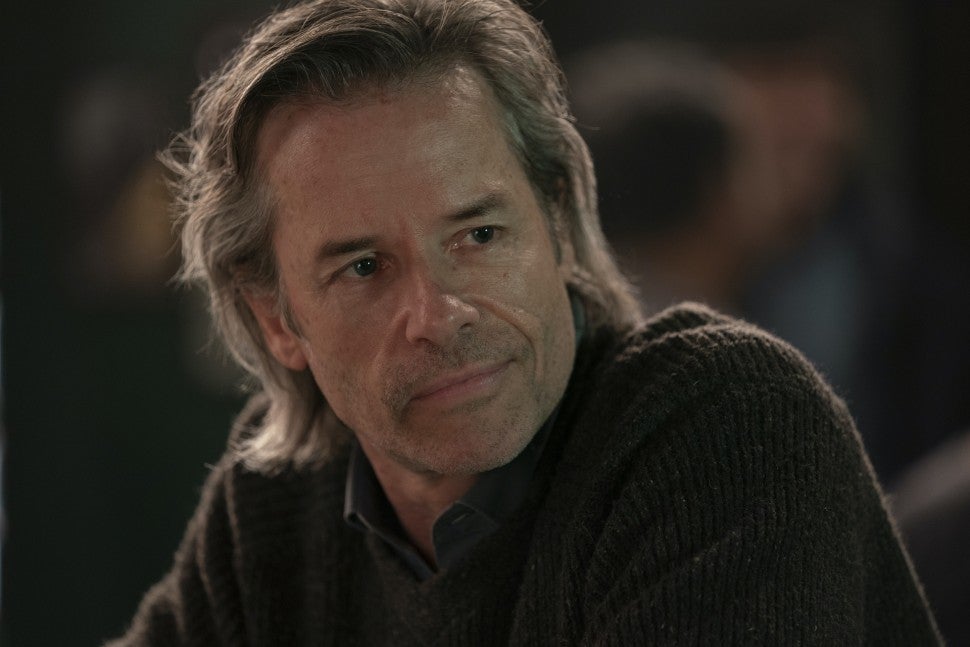 The planned two-week hiatus turned into about six months, “which meant that Kate and I got to experience our birthdays together for the first time on the 5th of October,” Pearce noted.

“On our joint birthday, I woke up, I opened my bedroom door to go to work and there was a gift and a card from my childhood sweetheart outside my door,” Winslet shared. “And then of course I did the same thing for Guy. So it’s very sweet, and kind of tinged with a little bit of romance that I quite like, and it was absolutely lovely.”

Pearce describes his role on Mare of Easttown as that of an “outsider,” a man in Mare’s orbit that helps her to unpack some of the drama in her life.

“He’s there just to remind her that she’s worthy of love, that she’s capable of love, and that love is an important aspect in life and that maybe it might do some good to let some back into her life,” he said.

The 53-year-old actor seemed to serve a similar role for Winslet, 45, off-screen. The actress admitted to ET that she had a hard time letting go of Mare and her struggles when the cameras stopped rolling.

“I wish I could say to you, ‘Yeah, I go home, I put on some music, I run a bath, I have a glass of wine.’ I don’t do any of that. I go home, I quickly do some exercise, frantically make dinner, learn lines for the next day, go to bed, dream about the job, get up at four in the morning, go back to work again,” she shared. “It just becomes all-consuming for me.” 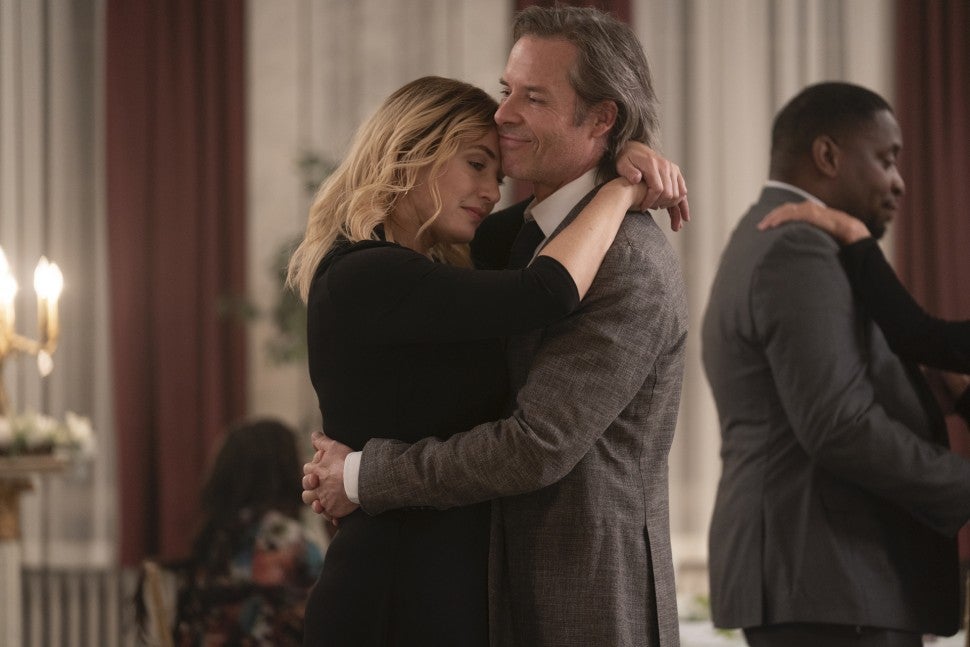 But Pearce doesn’t seem to think Winslet is giving herself enough credit.

“It doesn’t matter how dark the storyline gets, she just lives life to the fullest. You know, she’s an amazing woman, Kate. She really is,” he gushed. “She has such a lovely energy about her internally and she’s so interested in the people around her. And she’s so interested in family. You know, she’s got three kids of her own and of course, she’s now obsessed with the fact that I’ve got a little boy… And so we both, I think, have an equal kind of perspective on work and real life.”

“We take work completely and utterly seriously, but we also take life seriously,” he said. “So we can both go from one to the other.” 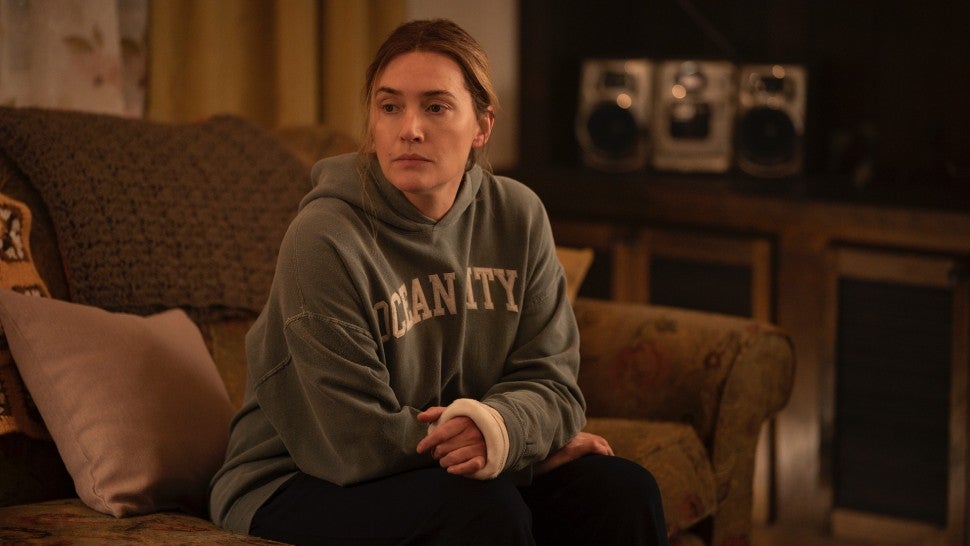 Months later, however, there’s still some part of Mare that’s stuck with Winslet. “I haven’t been able to leave her behind, quite honestly. I just miss playing her, and I loved it,” she told ET. “You know, it was a very special time and she almost became an alter ego for me… This woman properly infiltrated my soul, and I really felt such an ownership of this character.”

Mare of Easttown premieres on Sunday, April 18 at 10 p.m. ET on HBO. The show will also be available to stream on HBO Max.