Home » TV & Movies » Kendrick Lamar and Taylour Paige: We Cry Together Stems from How No One Can Agree on Anything Now

Kendrick Lamar and Taylour Paige: We Cry Together Stems from How No One Can Agree on Anything Now

“We Cry Together” was first introduced to audiences as a track off Kendrick Lamar’s latest album “Mr. Morale & the Big Steppers” (which is currently nominated for Album of the Year at the 2023 Grammys), and later became a short film eligible for the Best Live Action Short Oscar. However, according to the rapper, it “started with the film first, and the music came after.”

Speaking at a Q&A in Los Angeles alongside business partner Dave Free, who co-directed the “We Cry Together” film with Jake Schreier, Lamar explained the history to moderator Tessa Thompson. “The idea was always ‘Let’s capture this writing,’ not no song — the writing, and the film, and the texture, and the cinematography of it, in order to get the full experience out,” he said. Free added: “Music basically came in as a way to tell the tale — a thicker and longer story — in a smaller, more digestible time period.”

The six-minute-long film starring the Pulitzer Prize-winning musician and “Zola” actress Taylour Paige, about a toxic couple in the heat of an argument that ultimately ends in intimate reconciliation, stemmed from “the state of the world within the last five years for me,” Lamar said, “and seeing my frustrations on how nobody, in none of our cultures or what our belief system or our sexual preference or religious background is, how we can never come to an agreement.” 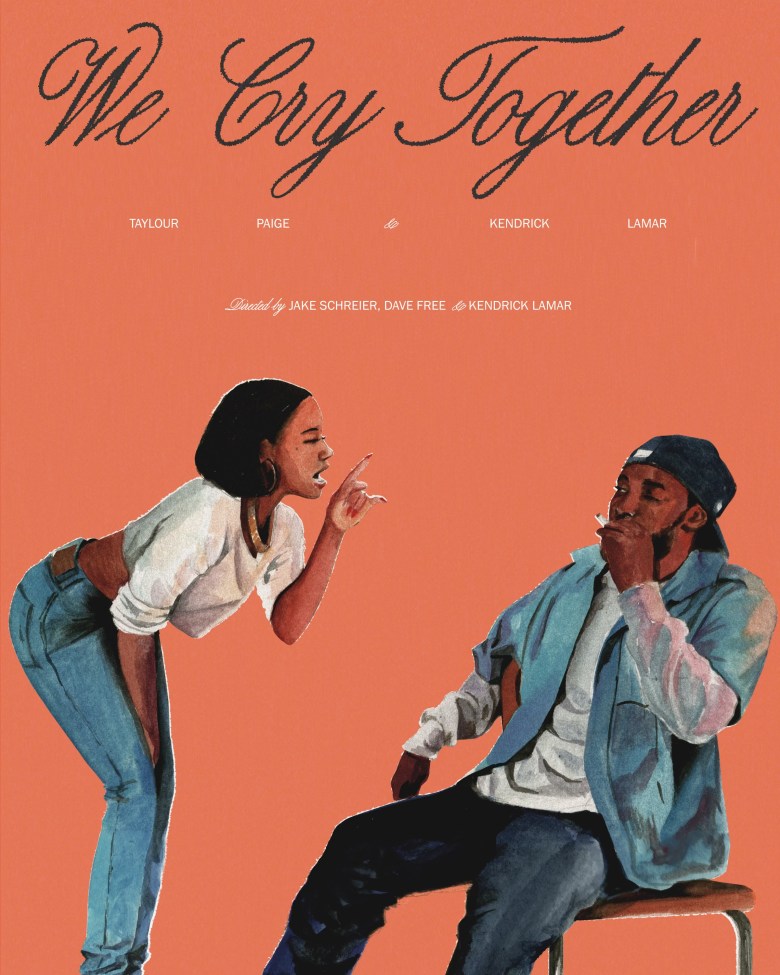 Poster for “We Cry Together”

During an interview before IndieWire’s LA3C Short Film showcase, where “We Cry Together” screened alongside other Oscar-eligible shorts, co-director Schreier and star Paige described recording the song version as a rehearsal for the film shoot. “That’s where we got really comfortable, because we were in the studio till four in the morning rewriting it, trying it, hearing it different ways, seeing what felt right,” said Paige. “So then, by the time we were filming, it was really just the blocking, the rehearsal, the physicality. But we were actually already rehearsing the physicality while we were essentially recording the lines.”

If the dialogue in the film sounds different from what’s on the album, it’s because the short features Lamar and Paige performing it live, within one take. In fact, Schreier’s expertise in directing visuals like Haim’s “Want You Back” using only one take is what drew Lamar and Free toward the filmmaker. Schreier said the pair emphasized to him that “We Cry Together” needed to be “its own piece of art and not a companion to a song.

He described the production process as exhilarating, and added that “the whole idea of the single take in this case is that it’s not to show off a camera move, or for you to notice that. It’s the idea that there’s something that you want to watch that is impressive.” Awed by Lamar and Paige’s performances in the film, even as the shoot was happening, Schreier said, “They are the magic trick, they are what’s impressive. To get to watch that every time, people that could put that much emotion and that much genuine performance into something that is also musical, I felt very lucky just to be there.”

Paige acknowledged that the film is intense, but insisted that it was made with affectionate intentions. “We’re hurting ourselves,” she said. “We’re hurting each other. And hopefully, you’re making art, if you have the privilege to, that reflects where we’re at, and hopefully we can transcend that. Immediately. Urgently. Right now. Because it’s that important.”

Watch “We Cry Together” below.