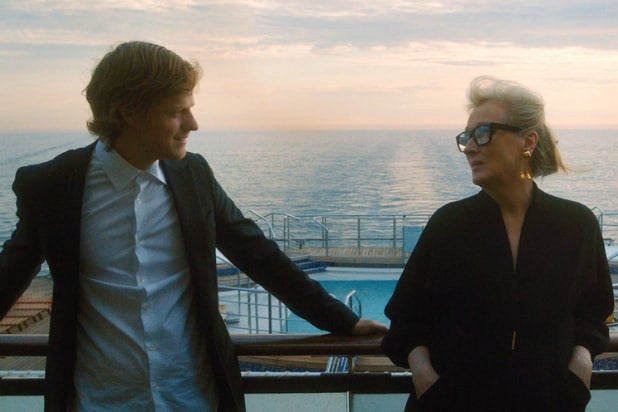 After enduring any number of paid celebrity vacations disguised as feature films (“Couples Retreat,” “Just Go With It,” “Blended,” etc.), it’s edifying to learn that a cast and crew can have a great journey and make a worthwhile film at the same time, as Steven Soderbergh and an impressive ensemble have done with “Let Them All Talk,” filmed almost entirely during a real transatlantic, New York-to-Southampton crossing on the Queen Mary 2.

You won’t begrudge Meryl Streep, Candice Bergen, Dianne Wiest, Gemma Chan and Lucas Hedges getting an ocean voyage out of the deal, since this comedy-drama about a blocked novelist having an awkward reunion with old friends is such a witty exploration of relationships and of the responsibility artists have to their muses. It’s “Wild Strawberries” for women of a certain age, and a big improvement over Soderbergh and Streep’s previous collaboration, the disjointed “The Laundromat.”

Streep stars as Alice, an acclaimed author. Her agent Karen (Chan) lets her know that everyone’s excited about Alice’s new manuscript, but she not-so-subtly mentions that they hope the book will be a sequel to Alice’s hit Pulitzer-winning novel, which is of course the author’s least favorite of all her titles. When Alice is offered a prestigious British literary prize, Karen arranges for the airplane-averse writer to cross on the Queen Mary 2.

Alice summons her nephew Tyler (Hedges) to act as her assistant on the trip, and she also invites college chums Roberta (Bergen) and Susan (Wiest) to come along, since they haven’t spent time together in decades. Unbeknownst to Alice, Karen is also on board to keep tabs on her and to find out more about the mysterious manuscript, even enlisting Tyler’s assistance.

It’s a straightforward setup, but screenwriter Deborah Eisenberg throws in plenty of little mysteries: What’s behind Roberta’s apparent hostility toward Alice? Who’s the mysterious gentleman Tyler sees coming out of Alice’s suite every morning when he goes to join her for breakfast? And why does mega-popular mystery novelist Kelvin Kranz (Dan Algrant) always seem to be underfoot?

The world of literature is a rarefied one, which the film constantly acknowledges — from Tyler’s friends having no idea who his aunt is (despite the fact that her most popular novel became both a film and a miniseries), to Tyler and Alice never having heard of Kelvin Kranz (despite the fact that both Roberta and Susan have devoured dozens of his thrillers).

Kelvin is a minor character, but his presence allows “Let Them All Talk” to make some amusing jabs at the struggles between art and commerce; for instance, we see Alice check the shelves of the ship’s bookstore, delighted that they carry four of her titles, but then gobsmacked to see a full shelf of Kranz. And when Alice later asks Kelvin — after he has cannily praised the unsuccessful book she holds closest to her heart — “How long does it take to write one of your… novels?” Streep makes that pause just the right length to be both polite and completely condescending.

It’s a fascinating performance from Streep, even though Alice is the hardest character to get to know, between the secrets she’s keeping and the hauteur she has developed over the years. (“When did she start talking like that?” wonders Susan.) Even with all the walls the character throws up around her, Streep always lets the audience into the core of this woman, whether she’s relaxing around Tyler or trying to interpret Roberta’s mixed signals.

Bergen is clearly having a ball, swanning through the Queen Mary 2 with a big blonde whoosh of Dallas hair and setting her sights on a wealthy older gentleman. There’s a nice bit of symmetry having her play someone whose private life became fodder for her novelist friend, since in “Rich and Famous,” it’s Bergen’s writer character who specializes in romans-à-clef about her Malibu neighbors.

Once again, Wiest can take what would be a throwaway line in another actress’ mouth and make it the movie’s most memorable quote. And while Hedges and Chan play characters of another generation than their fellow travelers, neither feels like a millennial stereotype.

Soderbergh once again pseudonymously acts as his own editor and cinematographer, and the ocean voyage provides an array of light sources for his camera — from the calculated honey-glow of the ship’s common areas, to the bright fluorescents of the galleys and laundries that passengers never see, to the shifting and unpredictable skies over the Mid-Atlantic. It’s an instant addition to the canon of great cruise ship movies, right next to “The Poseidon Adventure” and Godard’s “Film Socialisme.”

While “Let Them All Talk” doesn’t quite have the snap of Soderbergh’s “High Flying Bird,” it’s just as much a film of ideas about talent and commerce and the responsibilities of the rich and powerful. And with a cast as talented as this one, the title itself provides a guidepost for how to tell this story.

“Let Them All Talk” premieres Dec. 10 on HBOMax.

All, let, talk, Them
Celebrities